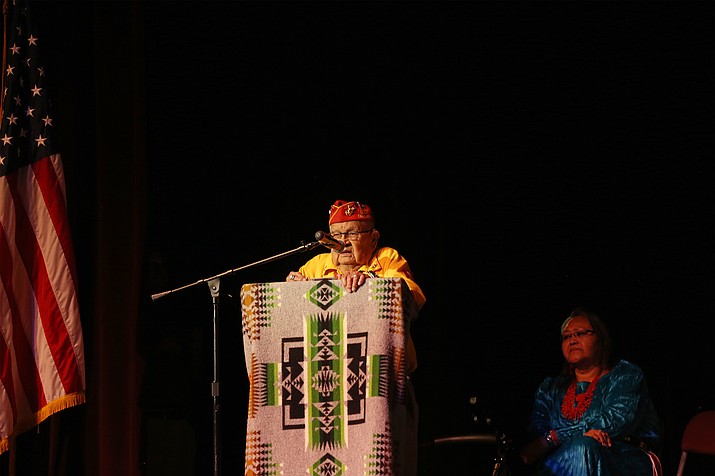 Before the screening of the documentary, President Russell Begaye takes a moment to pose for a picture with Code Talker Samuel Sandoval. Submitted photo

The Navajo Transitional Energy Co. (NTEC), a business entity of the Navajo Nation, sponsored the showing of the documentary.

“We are honored to assist Code Talker Samuel Sandoval with the viewing of the documentary about his life and his service to our country, said NTEC CEO Clark Moseley. “The Navajo Code Talkers were instrumental in aiding America with a victory in the Pacific Theater in World War II. We’re honored to help tell the story of one of America’s true heroes.”

Sandoval and his wife Malula said they have been wanting to show the documentary in Shiprock since the film was released in 2012. The video was produced by Johnson County Community College in Overland Park, Kansas. The idea for the documentary came after Sandoval was a guest speaker at the college in 2012.

In addition, Sandoval, 93, is from Shiprock and is the last living Code Talker in Shiprock — the engagement was special for Sandoval and his wife. This was the first time the documentary was shown to a large audience in his hometown.

“We want to have his legacy remembered for future generations,” said Malula Sandavol, Samuel’s wife.

Sandoval said he remembers how the Navajo language was encoded to not use English terminology so the Japanese could not figure out what the communications were for the United States.

“There are a lot of words that don’t fit in the Navajo language,” he said.

One example he used were different ships, like an aircraft carrier or torpedo ships that don’t have words in the Navajo language. The same complexities existed for the names of countries.

“There was a struggle in making (the code) because we were using terms that weren’t in everyday Navajo language,” Sandoval said.

Aside from talking about his military life as a Code Talker, Samuel said he worried about the future of the Navajo language.

“I’m always concerned about the Navajo language in the youngsters. It’s their language,” he said.

As a result, he hopes that the showing of his documentary will inspire the younger Navajo people to take pride in their language.

While he wants his story to be a source of inspiration, one lingering memory still sits with the 93-year-old Code Talker about his father.

Since the Code Talkers deeds were classified until 1968, Samuel’s father passed away before he could tell him about his role in winning World War II.

“I never got to tell him what I did. He knew I was in the Marines, but he never knew what I did,” Sandoval said.

“The Heart of a Warrior” chronicles Sandoval’s life. Sandoval is originally from Turtle Mountain near Nageezi, New Mexico. He joined the U.S. Marine Corps in 1943, a year after graduating from Navajo Mission in Farmington, New Mexico.

Sandoval, along with seven young men from Navajo Mission, enlisted, joining a group of approximately 60 Navajo men who made up Platoon 297. While at Camp Pendleton, Platoon 297 increased the lexicon of the Navajo code.

Sandoval saw action in five combat battles in the South Pacific. Of the 60 young Navajo men who originally enlisted, only four remain.

The documentary opens with a reenactment of a young Sandoval walking to the sweat lodge with his grandfather. The lessons Sandoval learned from his grandfather, he carried throughout his life.

“When I was young, I spent a lot of time with my maternal grandfather,” Sandoval said. “He would tell me about ceremonies and the teachings of traditional medicine men. It wasn’t that I was being groomed to be an apprentice. It was common to hand down these teachings in these ways.”

The rigors of Sandoval’s young life in a bygone era of Navajo history instilled virtues within him that served as guides to navigate his time in the Marines. By sheepherding, he was taught to walk long distances in the heat without much food or water.

As he and the other Navajos entered boot camp, they excelled in the physical activities that other non-Navajos found difficult, he said.

Contrasting the verbal teachings he was given in his youth by his grandfather, Sandoval felt the viewing of the documentary was necessary in recounting the history of the Navajo Code Talkers.

“What we hear is what we learn and it is wisdom that comes from our history. It’s a path that needs to be told,” he said. “Tonight, this is what we are doing. Tonight, this documentary will show us what a Code Talker is.”

Begaye said that America would not be what it is today, without the service and sacrifice of the Navajo Code Talkers.

“Sam Sandoval is a true warrior,” Begaye said. “We should all be proud of his accomplishments and those of the Navajo Code talkers. It’s because of them that we are able to enjoy freedom.”

Begaye urged all tribal members to continue to learn and speak Navajo, the language that was critical to winning WWII.

“Our Navajo language is powerful and we should never be ashamed of speaking Navajo,” Begaye said. “We should always strive to learn and teach our children. Navajo Code Talker Sam Sandoval used this powerful tool to win the war. Many people think it’s ships, guns and missiles that won the war, but it was our powerful language. Freedom is not free and let’s never forget this.”

An excerpt of the documentary can be viewed on YouTube at www.youtube.com/watch?v=Bb8dWADZOWg.

Proceeds from the sale of the video went toward the Johnson Community College Scholarship Fund.