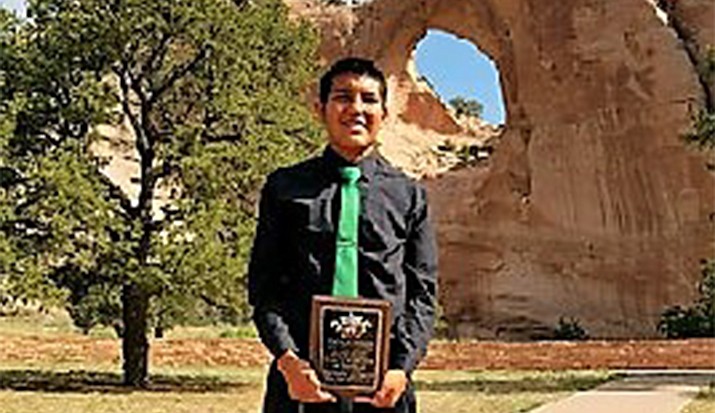 Vaughn Jackson will run for Paradise Community College this fall. 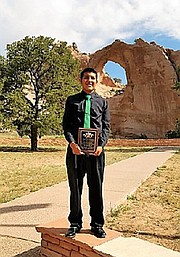 Jackson won the State Championship Division III 1,600 meter run in the spring in dramatic fashion by two steps after a neck to neck finishing lap and besting the favored runner from Saguaro High School.

But that was not Jackson’s only major win this year. At a track meet in early May, Jackson placed third in the two mile race.

Jackson is the only individual state championship winner on the western side of I-40 for northern Arizona high schools.

Jackson is from the Hopi Village of Mishongnovi and is the son of stepmother, Sharlene Navaho, and father, Sankey Jackson.

Quentin Jodie, sports editor for the Navajo Times, said the criteria for the award is based on nominations from area high school coaches. Forms are sent to those coaches in late May and the final nominations are used to formulate the Navajo Times All Stars. They are also used to pick the final Athlete of the Year.

Jackson received the most nominations from several area high school coaches in the 3A and 2A North Conference.

Since Jackson started running several years ago, he looks back to several coaches who helped him train and win along the way.

“Coach Thomas Hatathli and Celia Seweingyawma my elementary school coaches, were primary in getting me started on running competitively, Jackson said. “But I also want to acknowledge my high school running coach Arvis Myron. Coach Myron has been my running coach since my freshman year and he’s been so inspirational, not just in running, but I have also been in his Hopi language classes and have been learning more about my own Hopi culture and language through him.”


Jackson learned that he and Myron are related and are clan brothers.

“It’s been Coach Myron’s knowledge of running as well as Hopi history that have just helped me tremendously,” Jackson said.

Jackson says he is inspired deeply by Thomas Hatathli because Hatathli has run over 50 marathons.

“My goal is to get to 50 or more marathons, like Coach Hatathli,” Jackson said. “When I’m running a race, I just think about catching the next guy ahead of me or just keeping the pace. But if it’s a long run, then I start thinking about the next race and my work out plan. If its just practice, then I concentrate on what workout plan the coach has set for me and I just try to make it in that time allowed for completion.”

Jackson says his Hopi heritage has played a big part of his running interest.

“Being a member of the Hopi Tribe, gives me pride in our tribal running history, that Hopis have talent in this area, so I have higher expectations of myself when I run,” he said. “Also all my training at Tuba City High School helps me when I do run a traditional Hopi race at my home village. I am grateful for that, too, because I know I want to do my very best.”

Jackson also said that running helps him with his school work because he needs to have good grade to be able to qualify to participate in the sports program.

Jackson will run for Paradise Valley Community College this fall.