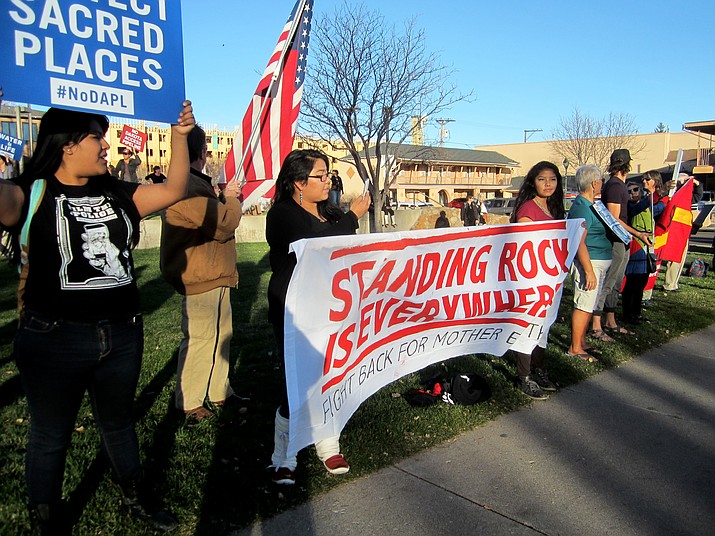 Flagstaff residents and Native Americans from the Hopi and Navajo Nations, among others, gather in downtown Flagstaff in front of city hall Nov. 15 in support of the Standing Rock Sioux Tribe in North Dakota, who are protesting the Dakota Access Pipeline. Katherine Locke/NHO

CANNONBALL, N.D. — Contrary to popular opinion, the fight over the fate of the Dakota Access Pipeline (DAPL) is not over. In reality, it is just beginning. Oil will continue to flow while environmental justice issues are resolved.

On June 14, Judge James Boasberg of U.S. District Court in Washington D.C. directed the U.S. Army Corps of Engineers to reconsider sections of its environmental analysis on the 1,172-mile-long pipeline, in particular the easements it granted for drilling under the Missouri River at Lake Oahe.

For the moment, about 540,000 barrels per day are moving through the 30-inch pipeline while the court considers a shutoff as a separate question. Normally, though, in cases where a permit is deemed incomplete but has already been issued, the permit is pulled, which in this case would mean stopping the oil, which has been moving through the pipeline since June 1.

Keeping the pipeline open marked a departure from normal procedure, said attorney Jan Hasselman of the environmental law firm Earth Justice, which is representing the tribal plaintiffs. He said it was the first decision that he was aware of in which a federal court focused on an allegedly flawed environmental justice analysis under NEPA (National Environmental Policy Act) as the basis of requiring the Army Corps to revisit conditions for a permit.

The Standing Rock Sioux Tribe and Cheyenne River Sioux Tribe previously had not convinced Judge James Boasberg of the merit of their claims under the National Historic Preservation Act and Religious Freedom Restoration Act.

But on June 14, Boasberg found merit in their claim under the NEPA, ruling that the Army Corps “did not adequately consider the impacts of an oil spill on fishing rights, hunting rights, or environmental justice, or the degree to which the pipeline’s effects are likely to be highly controversial.”

Energy Transfer Partners (ETP), the lead company behind DAPL, expressed satisfaction with the decision to leave the pipeline operational for now, and reiterated its confidence in the existing environmental assessments.

“We are pleased with the judge’s decision to allow pipeline operations to continue as this limited remand process unfolds,” ETP said in a statement e-mailed to Indian Country Media Network. “It is important to note that while Judge Boasberg asked the Corps to provide greater substantiation for its conclusions on two issues, the Court did not find the prior determinations to be erroneous. We believe the record supports the fact that the Corps properly evaluated both issues, and that the record will enable the Corps to substantiate and reaffirm its prior determinations.”

On June 21, the parties gathered in U.S. District Court in Washington, D.C. to establish a schedule for all sides to take what is likely their last best shot at resolving this case at this judicial level. And the question of the day, as Jan Hasselman, lead attorney for the Standing Rock Sioux Tribe put it, was, “Where do we go from here?”

Where exactly is “here” was the question on everyone’s mind.

In that ruling, Boasberg said the Army Corps had ignored the scientific evidence on the spill risk from the pipeline that the tribes’ experts had provided, and overlooked consequences to treaty rights such as hunting and fishing.

“It’s the first decision that I’m aware of ever in which a federal court has set aside a NEPA [National Environmental Policy Act] decision for a flawed environmental justice analysis,” Hasselman said.

Essentially, the Army Corps looked too narrowly, geographically speaking, at the risks of a potential spill where the pipeline would be placed and ignored the risks downstream “which would fall completely on the tribes,” Boasberg said.

On June 21, the parties presented a joint proposal for a timeline for the briefings that extends to the end of August. Boasberg said he wanted to move aggressively on the matter, and the parties complied, with first briefings due back July 17. But that timeline puts the Army Corps in a tough spot, as chief counsel Mike Marinelli pointed out.

“We’ve just started to grapple with the issues,” Marinelli noted.

Boasberg put the 10-week timeline into play regardless, even though a slew of others interveners and amicus briefs

are likely expected, making for some tight deadlines. After the hearing, Hasselman and Nicki Ducheneaux, lead counsel for the Cheyene River Sioux Tribe, spoke about what the process looks like from here on out in District Court.

“If the Army Corps goes into a room and closes the door and comes up with a new analysis, we won’t have solved any legal problem,” he said.

The public must be brought in, and the tribe and its experts should be consulted, Hasselman said, “and we’re going to be asking the court to order that if they don’t do it themselves.”

The June 21 hearing set out a schedule for evidence to be submitted about whether to vacate the Lake Oahe easement, the last sticking point for DAPL’s course through four states.

A decision will probably come down in September, Hasselman predicted.

Ducheneaux said the June 14 ruling could set a precedent.

“It is all of the tribes’ expectation that we will be a part of this process, and that we will be permitted to enter into the dialogue and provide information and consult on a government-to-government basis with the Corps as it makes its decision on these three pending issues,” Ducheneaux said. “As we advised the court today, if the Corps is going to obstruct us, and work with DAPL to keep us out of the process, then the tribes are prepared to go back to the court and fight this issue out in further briefing.”