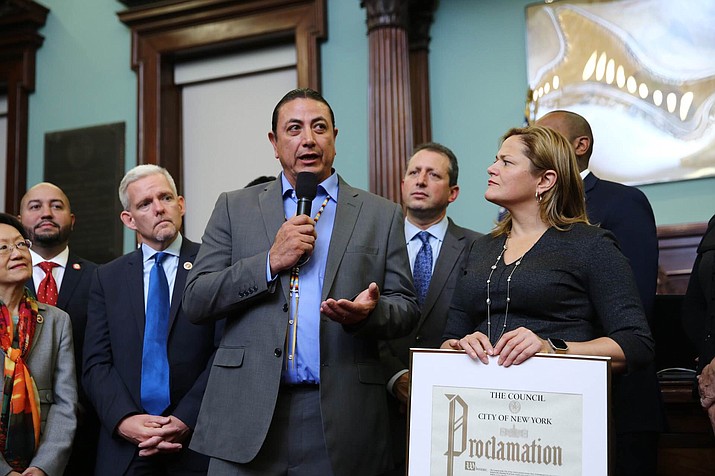 “President Trump is legally required to honor our treaty rights and provide a fair and reasonable pipeline process,” said Dave Archambault II, chairman of the Standing Rock Sioux Tribe. “Americans know this pipeline was unfairly rerouted towards our nation and without our consent. The existing pipeline route risks infringing on our treaty rights, contaminating our water and the water of 17 million Americans downstream.”

The U.S. Army Corp of Engineers rejected DAPL’s request for an easement late last year, finding that the agency had failed to fully consider the impacts of the pipeline on the Standing Rock Sioux Tribe. The Department of the Army pledged to conduct a full environmental review of the Missouri River crossing and evaluate alternative sites, which would not put the tribe at risk of an oil spill. However, that environmental review would be circumvented under today’s Executive Memorandum, allowing the project to immediately resume construction.

Trump’s press secretary said Jan. 23 that Trump intended to approve the easement with an aim toward job creation. But tribal leaders note the bulk of pipeline jobs are in pipeline construction. The pipeline only creates a total of 15 permanent jobs in North Dakota. A reroute would protect the tribe’s water and create hundreds of jobs, Archambault said.

Standing Rock said it’s not a matter of if, but when DAPL will leak. Sunoco, one of the American companies operating DAPL, has a poor record on pipeline safety and spill prevention. Data from the Pipeline and Hazardous Materials Safety Administration show operators have reported about 200 crude oil spills per year, on average. More than 176,000 gallons of oil spilled in western North Dakota last month alone.

Archambault said Trump’s decision appears to be a political payback.

“By granting the easement, Trump is risking our treaty rights and water supply to benefit his wealthy contributors and friends at DAPL,” he said. “We are not opposed to energy independence. We are opposed to reckless and politically motivated development projects, like DAPL, that ignore our treaty rights and risk our water. Creating a second Flint does not make America great again.”