Tribes eye Trump: Some welcoming, some wary of new administration 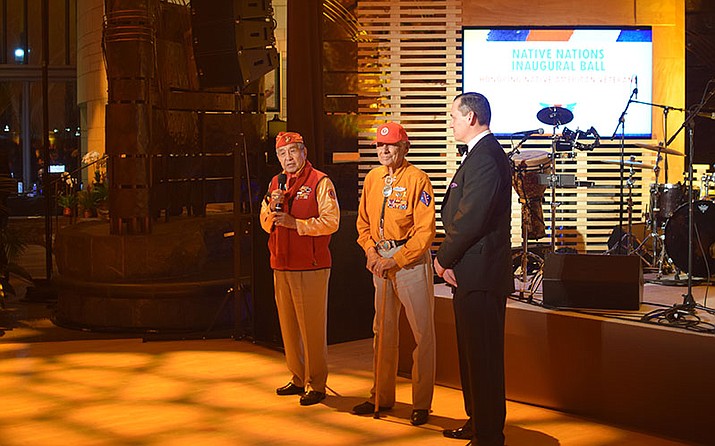 WASHINGTON — Peter MacDonald Sr. is a Navajo Code Talker, a lifelong Republican — and an unabashed supporter of President Donald Trump.

“The Navajo tribe, like most Indian tribes, is very conservative,” said MacDonald, who was in Washington last week to march in Trump’s inaugural parade. He said Jan. 19 that the Navajo philosophy: “to do things for yourself, to be what you want to be. That’s the Republican philosophy.”

But other tribal officials are taking a wait-and-see approach to the Trump administration, recognizing potential positives, but also raising concerns about tribal sovereignty and other issues.

With 562 federally recognized tribes, it’s hard to pin down one position, with political differences common even within individual tribes, one academic said.

“The terms liberal and conservative are not particularly useful when looking at American Indian tribes,” she said.

Navajo Nation President Russell Begaye was one of many tribal leaders to endorse Democrat Hillary Clinton in the presidential election, though he’s since expressed a willingness to work with Donald Trump to help his people.

Begaye, in Washington last week for the inauguration, agreed with MacDonald that the message of self-determination does resonate with the Navajo and their goal of greater self-governance.

“Looking at statements made by Mr. Trump, his emphasis on self-determination is something we can take advantage of,” Begaye said. “We’re hoping to have full authority over natural resources. We have to have authority over any person that commits a crime on the Navajo Nation.”

Begaye said he sees opportunity in reducing the amount of federally owned land on reservations and the possibility of moving jobs from overseas to tribal lands, where he said the economic conditions were similar enough to keep operating costs low.

Arizona Sen. Carlyle Begay, R-Ganado, said that the new administration’s focus on reducing regulation — and reducing what he sees as an unnecessary amount of federal signatures to enact change on the reservation — will improve Navajo economic progress and sovereignty, a big issue for many tribes.

“The administration wants to reduce bureaucracy, and that’s what Indian country as a whole can really benefit from,” Begay said.

There is more than just economics at play, however. Some on both sides of the aisle have criticized Trump for comments seen as derogatory toward ethnic minorities. Begaye said Clinton, a former U.S. senator and former secretary of state, might have had a better understanding of the cultural factors in the national tribal community.

“We felt that Secretary Clinton knew us best,” Begaye said. “We value diversity in this nation. We felt that (Trump) was not really connecting with who we are as this nation. If he can’t see that, he’s blind to what this nation is. It’s something that he has to embrace. America is no longer white.”

A general feeling of uncertainty pervades many tribes, said Kevin Gover, director of the National Museum of the American Indian, at a Native Nations Inaugural Ball at the museum Jan.20.

“I think it’s fair to say that the tribes are a little wary, but they are hopeful,” Gover said. “For the tribes, it’s almost always about more freedom to act, but with federal support.”