Governing board president says Hopi Jr/Sr high should be separated 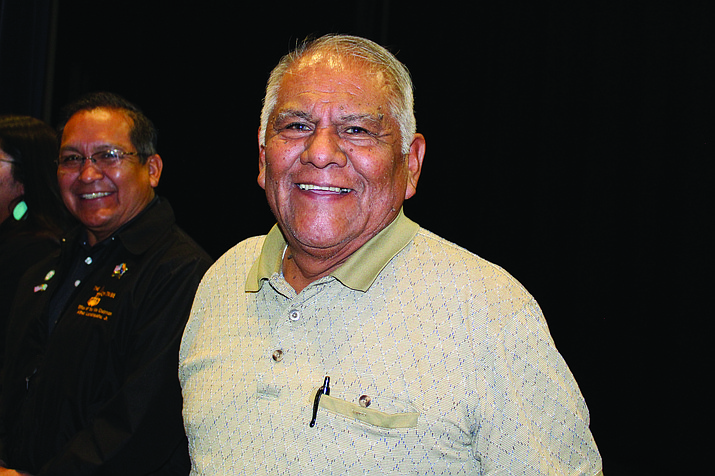 Ivan Sidney, president of the Hopi Jr/Sr High School Governing Board, believes the junior high and high school should be separated. Photo/Stan Bindell

POLACCA, Ariz. — Ivan Sidney, recently appointed president of the Hopi Jr/Sr High School Governing Board, recounted how the school was built in the 1980s so Hopi children would no longer have to go off the reservation for their education.

Sidney addressed the staff Jan. 25 during an in-service in the school’s cafeteria.

Sidney said the school is going through some difficulties, but it needs to move forward. He said the school board does not get into the day-to-day decisions at the school, but sets policy. However, he said, in the past year communication has been an issue, so the board wants the ability to talk with the staff.

“We have a dream to have our own athletic facility,” he said.

Sidney said the school was meant to serve as an athletic facility for the entire Hopi Reservation. He said an alternative school is needed to help students when they get suspended rather than putting them back on the street. He said a dorm is needed to house students who want to stay there and to help athletes who return to the school from away games late at night. He said the junior high school and high school need to be separated.

“The board is preparing a lobbying packet to Washington D.C.,” he said. “We can’t wait on the tribe. We need to act.”

Sidney said a meeting is planned with the Bureau of Indian Eduction (BIE) in Albuquerque and they are going to be asked: “Where have you been?”

Sidney said Hopi Jr/Sr High School has had a list of needs, but the BIE has not been there to help. He said HJSHS needs to recruit a superintendent. A meeting with the tribal chairman is also planned.

Sidney said the school spends too much time on discipline.

“Our mission is to teach students and to have them come to school ready to learn, but discipline has been a problem. Sadly, the discipline problems go into the community,” he said.

Sidney said the school board will be holding listening sessions with the various departments at the school starting with the special education department.

“Sometimes you have to get involved,” he said. “We will listen to the departments. You talk. We listen. We hope to make improvements.”

Sidney said he has heard people say they won’t send their children to HJSHS because of the problems.

“That’s how serious the problem is,” he said. “Let’s rededicate ourselves. We must think to get reorganized.”

He said teachers this year, unlike some years, will get evaluations.

“This is not just to discipline, but to commend,” he said. “With your help we can move forward.”

Sidney recalled that in 1987 he met with then President Ronald Reagan in the oval office and kept staring at his motto: “It can be done.”

Sidney said anything can be accomplished.

“We are limited in money, but together we can get things done,” he said.

Alban Naha, acting superintendent at HJSHS, said they want to include everyone in the process.