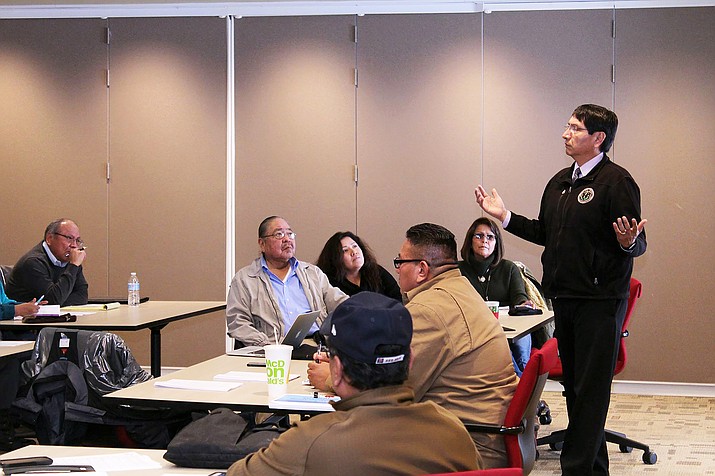 Begaye urged tribal members to look after each other and enjoy the blessing of precipitation, which will lead to a fertile spring and summer season.

“Today, we know there’s emergencies,” he said. “It’s very muddy and school buses are getting stuck. There’s a lot of snow out there. Be cautious when you are traveling.”

Harland Cleveland, with the Navajo Department of Emergency Management said there have been no reports of property damage, loss of life or injuries from recent winter storms.

Begaye said chapters that have declared emergencies can now use money that has been identified for emergency purposes.

“Constituents at the chapter level are requesting wood, coal, water, medication and food,” Begaye said. “These funds can be used for that. Think of your elders first.”

Nez said chapters should maintain receipts, records and paperwork for reimbursements of any loss.

CEM Chairman Herman Shorty described the situation as fluid and underscored the need to maintain communication between all entities responding to emergency calls.

“We had calls from Community Health Representatives in Shonto requesting assistance from the chapters to deliver fuel and medication,” Shorty said. “We need to keep each other informed and most importantly, track costs associated with the emergency.”

Apache County District 2 declared an emergency Jan. 20 and was on call throughout the weekend to clear roads, deliver wood and conduct checks on high-risk individuals in remote locations.

The county deployed their incident command system in response to emergencies. Officials and staff from the county worked with Community Health Representatives to conduct welfare checks on individuals in remote areas.

Thirteen chapters declared emergencies in response to the storms. The emergency declarations were primarily to address issues from muddy roads, including constituent’s needs such as wood, coal, water and food.

“Our priority are the lives of Navajo people,” said OPVP Chief of Staff Arbin Mitchell.

He noted that although many families have strong ties to livestock, the main priority are human lives.

According to Harland Cleveland, director of DEM, there have been no reports of property damage, loss of life or injuries resulting from the storm.

“Capturing data is important,” Clevand said. “Of the 110 chapters, only 17 chapters have responded with situation reports from the storm. Thirteen chapters declared emergencies.”

Data capturing from the incident report forms, road assessments, labor and equipment forms, purchasing receipts and other documents will be important for the reimbursement claim from FEMA, he added.

Regina Holyan, an attorney with Navajo DOJ, said she will be working with DEM on documentation requirements from FEMA.

“We need to document that we have reached at least $250,000 to be eligible,” Holyan said. “These documents will be exhibits to show FEMA how much it’s costing us to address this emergency,” Holyan said.

He said checking on elders and neighbors in remote areas is the responsibility of everybody at the local level.

“Don’t just depend on the government or the CHRs,” Nez sasid. “Check on your families and neighbors. We need to return to our fundamental teaching, like helping one another. Preparing during the summer for the winter ahead is a teaching we need to re-instill into our people.”