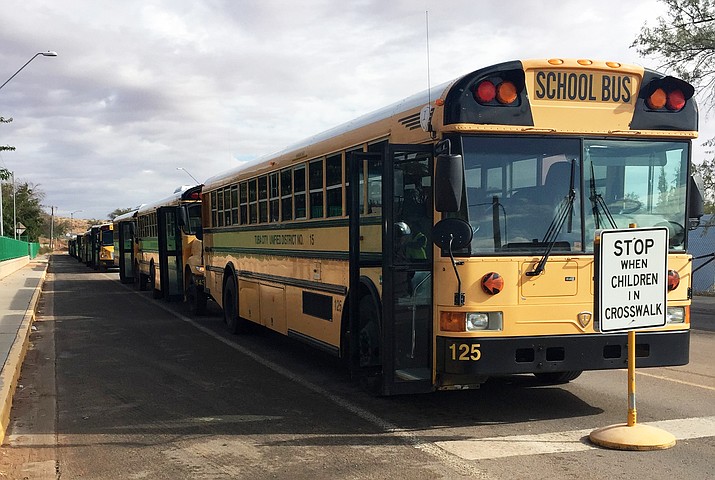 TUBA CITY, Ariz. — Several written requests have been submitted to Tuba City Unified School District (TCUSD) asking school bus drivers to drop students off in front of their homes because packs of dogs have either chased or tried to bite students who are coming to and from bus stops.

Two areas of Tuba City and Moencopi, specifically Hopi Housing and Urban Development housing east and an area near Coalmine Street, just past the Tuba City District Office and Tuba City Primary School, have been the site where the dogs are most aggressive in chasing the students as they step off the busses. If a student runs home, the dogs seem to get more aggressive.

TCUSD has said its highest priority is the safety and well-being of its students. Tuba City Transportation Director Orson Bigman suggested the following to help curb some of the confrontations between dogs and students.

Parents are encouraged to walk their young students to the bus pick up area for both pick up and drop off morning and afternoon. Parents are also encouraged to talk to their kids about not running to the bus stop since that seems to be one reason the dogs are giving chase. Families should leave their family pets at home since the pack of dogs have been chasing the pets, too, which sometimes can end up in the child being knocked over and more at risk from the pack of dogs.

“If there is a dog bite incident, when the young student is taken to the hospital for treatment, the hospital will require a short report on the incident and it should be reported to the Hopi or the Navajo police, since both Hopi and Navajo tribes have small animal ordinances in place approved by their respective councils,” Bigman said.

Bigman said there are fines and animal restraint repercussions in place for both tribes that could result in either losing your personal family pet or a stiff monetary fine for endangering community members by not leashing a pet or keeping them in an enclosed fenced area to prevent harm to other community members.

Hopi Tribe’s Small Animal Ordinance, which was approved in March of 2016, states “this ordinance is in place to control domestic animals by their owners, protect children and elderly, and all residents of the Hopi Reservation and their guests from injury from dogs, cats and other animals and prevent the spread of disease which could harm human beings and wildlife on the Hopi Reservation.”

The same is true for the Navajo jurisdiction of the Tuba City Western Navajo area of Tuba City.

Tribal officers enforcing this small animal ordinance for the Hopi Reservation area can issue citations to pet owners for violating the Small Animal Ordinance that can result in fines or animal impoundment.

The Hopi Small Animal Ordinance applies to all domestic animals, dogs and cats over four months of age who reside on Hopi longer than 30 days. These animals must be tagged and show proof of vaccination.

Other helpful ways to comply with both the Navajo and Hopi small animal ordinances is to get cats and dogs vaccinated and registered. One service that offers free rabies clinics is Dr. Ruby Veterinarian Services. Ruby sets up her mobile vet unit in Tuba City near the car wash on Main Street on alternating Fridays. Ruby also offers spay and neutering services for a reduced fee.

There are also free services for vaccination and spay-neutering from the Coconino County Health Department and they come in a mobile RV unit to the Tuba City area. More information is available by calling the Coconino County offices in Tuba City, which are located in the old library behind the old hospital in Tuba City or by calling the county offices in Flagstaff, which will provide a monthly schedule of its Tuba City-Moencopi area visits.