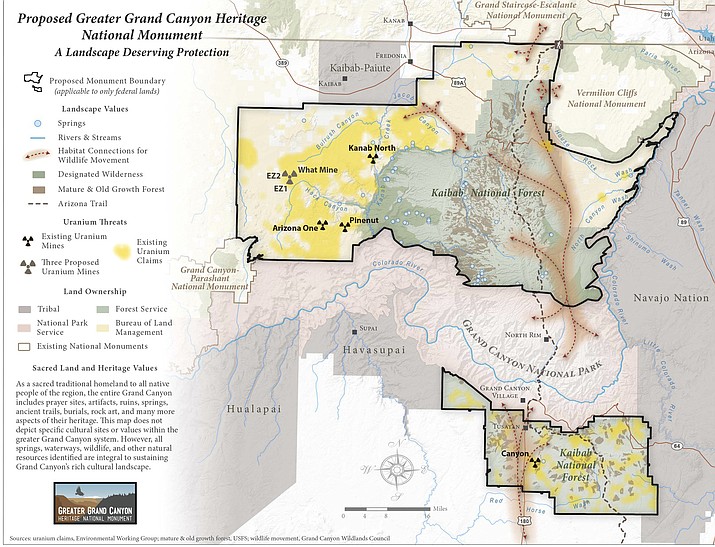 U.S. Sens. Jeff Flake (R-Ariz.) and John McCain (R-Ariz.) both said the lack of the designation was a hard won victory.

“We would like to thank the countless stakeholders, including Arizona’s sportsmen and cattlemen community, along with business, who, through active engagement and sheer force of will, helped us convince the outgoing administration that Arizona’s natural and historic sites can be protected in a manner that still respects the wide range of federal land users in the state,” the press release said.

Ranking member Raúl Grijalva expressed his disappointment earlier in December as it became clear the administration would not designate the monument.

“I can only express my profound disappointment,” Grijalva said. “The Grand Canyon is one of the world’s most iconic and popular natural places, not just for its beauty but for its importance to tribal culture and history. Instead of building on former Secretary [Ken] Salazar’s work, the interior and agriculture departments are apparently willing to leave the future of the Grand Canyon and the health of Arizona tribes up to [President] Donald Trump. I am not.”

Havasupai Councilwoman Carletta Tilousi said the Havasupai were disappointed that Obama failed to protect the crown jewel of the United States — the Grand Canyon.

“The Havasupai people are on the verge of human extinction due to massive uranium development on the rims of the Grand Canyon,” she said. “As the original people of this country, we are the most targeted by international mining companies who come into our territories and contaminate our waters and homes. We are very disappointed in the Obama administration for failing to protect the Grand Canyon.”

The Hopi expressed a similar concern for a place they consider a place of origin and a spiritual home and sanctuary of cultural tradition.

“It must be stated for the record that this failure to act demonstrates a lack of simple, fundamental respect and reverence of this significant cultural and geographical landmark,” said Hopi Tribal Chairman Herman Honanie. “Within the Grand Canyon, Hopi ancestors left behind tangible proof of their existence; monument designation or not, our footprints will remain. Whether it is the uranium mining industry or the proposed Navajo Escalade Project, the Hopi people remain committed to opposing all harmful commercial interests dedicated toward the exploitation of the Grand Canyon.”

“This landscape should not be destroyed but saved for future generations to admire the beauty of the Southwest,” Begaye said. “We need to make sure that it is protected as a national monument.”

Grijalva is reintroducing the Greater Grand Canyon Heritage National Monument Act and is already mobilizing monument supporters for a strong push in the 115th Congress. The bill, which closely mirrors the previous version, would confer national monument status on two parcels of federal land, one north and one south of Grand Canyon National Park.

“The need to protect the Grand Canyon is bigger than who’s president or who sits in Congress,” Grijalva said. “The American people demand that this important place be preserved. People from all walks of life have been fighting this fight for a long time, and we’re going to keep working until we get it done.”