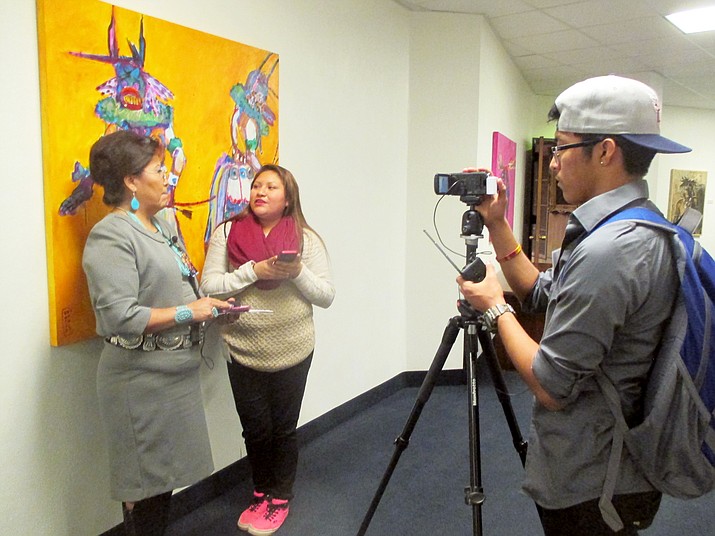 Peshlakai, who was recently elected to her first term in the Arizona Senate, made her comments during a video interview with Hopi High media students during the 22nd annual Indian Nations and Tribes Legislative Day Jan. 11 at the state capital. Greta Quotskuyva was the on air personality while Kyle Secakuku was the videographer for Hopi High.

“My number one goal is to get more money for public schools for more quality, more infrastructure and more access to technology,” Peshlakai said.

Peshlakai said she was happy when she was elected because she spent a lot of years in public service and supporting her communities. She represents Legislative District 7, which is the largest state legislative district in America and larger than several states. It includes seven counties and eight tribal nations, including the Navajo Nation and the Hopi Tribe.

Peshlakai served in the Arizona House of Representatives in 2013-2014 and a number of her colleagues from that time are serving in the Senate with her now.

“We are like a unique family. I may not always agree with my brothers and sisters, but we respect each other and treat each other kindly,” she said. “We have that mutual respect for each other.”

“We’re also discussing intergenerational communication so youth can learn from the elders,” she said.

Peshlakai said Gov. Ducey sounded like a great advocate for public education during his State of the State speech.

“I need to hold him to that for you all and the children in LD7,” she said.

“The control room was the highlight,” Quotskuyva said.

Quotskuyva said Peshlakai was amazing because she has been a role model for her since the eighth grade. She was very happy to interview her.

“She is going to make a difference for us and others,” she said.

Serena Leslie, a junior print journalism student at Hopi High, said seeing her fellow students interview Sen. Peshlakai was a bucket list for the students who interviewed her and for her to be right there beside them was an honor.

“She is a journalist who inspired me to become a journalist. She makes her point, knows what to say, solves issues in a snap and does an amazing job with her work. Each word she speaks has a back story and it teaches the young people about life,” Leslie said.

Amber Polacca, a sophomore print journalism student at Hopi High, said legislative day was a chance to learn about Arizona and other tribes.

Polacca said it is good that Peshlakai supports better funding for education.

“The high point of Tribal Legislative Day was going on the Senate floor and being able to stand just right there by all of the legislators and tribal leaders,” she said. “I also thought it was cool to go into the VIP room. It was also cool that we got to go into the brain where they do all the broadcasting for the ceremony.”

“It was cool that she allowed us to go into the VIP room, along with the brain. Although she was busy she was willing to give us her time,” she said.

“The high point of Tribal Nations Legislative Day was when all of the students got to be on the Senate floor instead of looking down on the speakers,” she said.

Casarez said the day could have been improved by having more younger speakers to encourage leadership in the youth.

Kyle Secakuku, a senior videographer at Hopi High School, said Tribal Nations Legislative Day was all about tribes working together and working with state legislators.

“I thought it was nice to see all these tribes coming together for one common goal to set a path for the future,” he said.

Secakuku liked that Uqualla from the Havasupai Tribe was in traditional dress.