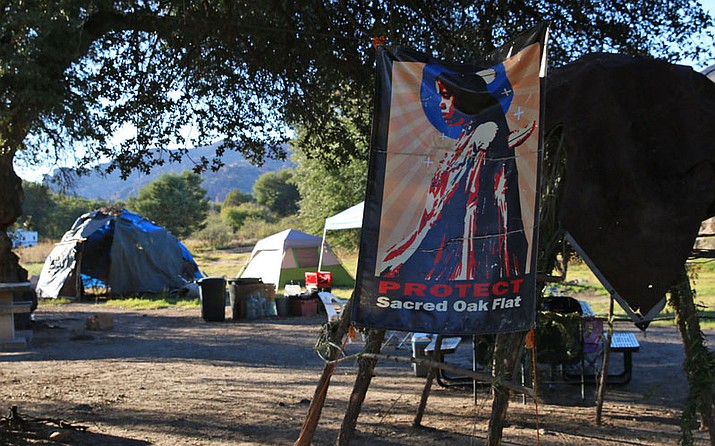 Members of the San Carlos Apache Tribe set up a camp near the entrance of Oak Flat campground near Superior, Arizona showing they oppose a proposed copper mine. Photo/Bri Cossavella, Cronkite News

A-frames are structures used in the mining process. These can be spotted west from the Oak Flat campground near the town of Superior. Photo/Bri Cossavella, Cronkite News

SUPERIOR, Ariz. — Oak Flat, a desert landscape and 90-minute drive from Phoenix, lies in the midst of an environmental and economic controversy.

Members of the San Carlos Apache Tribe revere the federally owned land as sacred. Environmentalists consider it a sanctuary for wildlife and vegetation. Climbers, hikers and campers gravitate to Oak Flat for outdoor recreation, and Resolution Copper Co. covets the rich veins of copper running below the surface.

The act is primarily made up of military reform and funding language and has passed consecutively for about 50 years, but Sen. John McCain, R-Arizona, was able to add the Resolution provisions to the bill that year, according to a Cronkite News article.

Prior to the bill passing, Resolution submitted its plan of operations to the U.S. Forest Service’s Tonto National Forest. The forest service “accepted” the plan, but has yet to approve it. Now that the bill is the law, federal agencies have no choice but to carry it out as long as certain requirements are met, said John Scaggs, spokesman for the forest service.

Environmentalists and the tribe remain opposed to the mine that Resolution said would create jobs and boost Arizona’s economy, while providing copper, “a key ingredient in wind and solar energy.” Company leaders propose exchanging eight land parcels across Arizona for mining Oak Flat.

In addition to a mining operation, Resolution proposed a land exchange. The company will give land it currently owns to public land managers, like the U.S. Forest Service and Bureau of Land Management, in exchange for the land that rests above the copper stores.

The Resolution parcels are scattered across the state near places like Payson, Cave Creek and Mammoth and total about 5,300 acres. After the swap, Resolution would get about 2,400 acres of land, including Oak Flat, according to the forest service website.

But the mine is projected to affect nearly 7,000 acres of surface land, according to the forest service website. It would extend 7,000 feet underground and would be the largest copper mine in the United States, leaving behind a 1,000-foot-deep crater, according to Resolution’s website.

A “bipartisan group of leaders,” “local communities” and Resolution officials came together to decide which lands would go to public land managers, according to that website.

A government appraiser will be jointly selected by the forest service and Resolution to evaluate and determine if the proposed lands are of “equal value” while abiding by nationally recognized standards.

If the appraiser concludes that the lands are not of equal value, Resolution will have to give up more land or pay the federal government to make up the difference, according to the forest service website.

The selection process for the appraiser is under way and the evaluation is expected to begin in 2017, Scaggs said.

Wendsler Nosie Sr., a member of the San Carlos Apache Council, said that in terms of cultural value, the other land parcels don’t fit the bill. Nosie is also a representative of the Apache Stronghold, an organization opposed to the proposed mine.

“In ancient times and today, references to Oak Flat can be heard in our songs, rituals, teachings and language,” he said. “Understand that any land base is important because there’s purpose to each of them, but Oak Flat is everything that makes us who we are.” He called the mine the “genocide of our religion.”

Nosie said if Christians wanted to explore their religion, they can go to Europe where preserved buildings and monuments stand today — Oak Flat is symbolically identical and future generations wouldn’t be able to connect to it if it’s altered, he said.

One of the parcels Resolution is proposing is a section of Apache Leap — a historically known jagged cliff near the town of Superior. In the late 1800s, members of the Apache Tribe plummeted off of it, greeting death, rather than being captured by U.S. Cavalry, according to a reflection of an article, “The Legend of how Apache Leap got its name.”

“We respect the importance of the Oak Flat area to many Native American people, and have committed to give the public access to the Oak Flat campground for as long as it is safe,” Resolution’s website says. “We hope we can work with neighboring Native American tribes by answering and addressing their concerns.”

If the swap occurs, the land parcels would be considered “public” while under the ownership of public land managers, but one parcel would remain mostly off-limits to public recreation.

The Appleton-Whittell Research Ranch, an affiliate of Audubon Arizona, conducts research and preserves grassland ecosystems and manages 940-acres owned by Resolution. The research ranch manages 8,000-acres, according to their website.

After the swap, all that would change is ownership, said Sonia Perillo, Audubon Arizona’s executive director. The 940 acres would continue to be used for conservation purposes on behalf of the research ranch.

With permission, the general public can access a limited number of roads and trails, according to the ranch’s website.

Robin Silver, co-founder of the Center for Biological Diversity, committed to preserving wildlife and habitats on the brink of extinction, opposes the land exchange and mining in Oak Flat.

“The American public is getting ripped off,” Silver said. “The only land that is of value is the research center’s because it hasn’t been overgrazed, but it’s of no value to the general public because it wouldn’t be open to them, unlike Oak Flat that offers recreational opportunities to the public and is of cultural value to Native Americans.”

According to Resolution’s website, the parcels they are proposing to trade are home to archaeological sites, destinations for rock climbers and nature trails.

How the parcels would be managed would be up to its prospective owners — the Bureau of Land Management and the U.S. Forest Service.

Resolution included lands that are of “high-priority (for) conservation,” according to the forest service.

One parcel includes seven miles of the San Pedro River that would become part of the San Pedro Riparian National Conservation Area. Other parcels include creeks, wetlands, and an abundant amount of wildlife, according to Resolution.

Perillo said Audubon Arizona officials agree the proposed lands are valuable for preservation but question the environmental consequences of mining in Oak Flat.

During a period in which the forest service accepted public comments and letters in reference to the mine, Audubon Arizona raised concerns about threatened and endangered species, water quantity and quality, and the tailings pile, the pile of leftover rock after copper is extracted.

Resolution’s website says company officials would protect plants and animals by “removing vegetation only when it is absolutely necessary” and “using covers and containers to keep birds and other animals out of areas of the mine where they could be injured.”

“Beneath the surface, everything is intertwined,” he said. “It’s not just Oak Flat. Water in the Valley and across the state will be affected.”

Nosie said the tribe and its lawyers are working with the forest service to address concerns.

Resolution’s website says company officials will reclaim the land after the mining operation is complete to replant vegetation and ensure land and water are “safe.”

The mine would take 10 years to build, would operate for 40 years, and then require about five to 10 years for reclamation, according to the forest service website.

The mining operation is estimated to create 52,000 local jobs and push billions into the state’s economy over the life of the mine, according to Resolution’s website.

The forest service is completing an environmental impact statement, a mandatory document under the National Environmental Policy Act of 1969. The statement process includes accepting public comments and analyzing potential positive and negative environmental changes because of the proposed mine.

The completed statement would guide mining operation and outline other federal actions to protect the environment, Scaggs said.