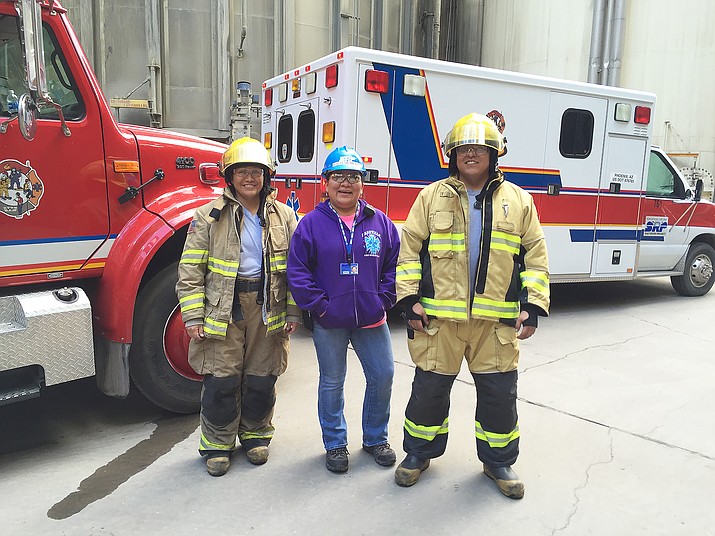 PAGE, Ariz. — Germaine Beard was a sixth-grader when she saved her grandfather’s life.

“My grandfather started choking,” she said. “What do I do? It was just us at home.”

She remembers he silently stood up and grabbed her hands, placed them under his sternum and motioned for her to push up.

After a couple of tries, she said, the food he was choking on dislodged. He sat down to rest. He was aware of what had just taken place — but the little girl was not.

“I was still shaking but I couldn’t cry,” she said. “That always comes back to me.”

Today, Beard is trained to save lives and knows exactly what occurred with her grandfather. She had performed the Heimlich maneuver for the first time.

As a Navajo Generating Station O&M 3 in the Operations Department, she is one of the power plant’s 35 certified Emergency Medical Technicians. She is part of the NGS 130-member Emergency Response Team, or ERT.

Beard is also a Navajo mother who was raised by her grandparents near Shadow Mountain between Cameron and Tuba City.

She grew up with traditional teachings that continue to instruct her to always help people. Those teachings, she said, drove her to become an EMT.

“My grandpa always said, ‘Be compassionate. Be forgiving, and help others that are in need,’” she said. “‘Help them to the best of your ability.’ Since then, I’ve always thought I’d like to help people because that’s what he taught me.”

Each day of the year, Beard and her colleagues on the ERT are prepared to do just that. Tucked in the NGS Service Building only minutes from any place on the plant site is the NGS Fire Shop, a second workplace home to NGS first responders.

Inside the Fire Shop is a red 1999 International 4900 fire engine with its 750-gallon capacity and 3,500 feet of hose, an ambulance, a fire-retardant foam trailer and an emergency response trailer to carry all gear and personal protective equipment for confined space rescue, high-angle rescue and hazardous material scenarios that could occur within the power plant’s various high-pressure, super-heated and accelerated-speed environments.

“We train every quarter,” said Heath Beard, O&M supervisor over NGS Fire Protection and Germaine Beard’s brother. “We have to train. There are five shifts we have to cover. It usually takes us one week each quarter just to do a refresher.”

In mid-December, Scottsdale Fire Department Captain and paramedic Bill Crowther and Battalion Chief Clint Steves were at NGS to provide training in advancing hose lines up to elevations where there may not be a water supply.

“We use the truck to establish a water supply down here on the ground from their standpipe systems, and via the truck they get water about 80 to 90 feet up,” Crowther said. “They have a big ERT here. They’re trained in a lot of different disciplines. Fire is just one of them.”

Heath Beard’s job is to manage all of the fire protection systems at NGS and the emergency response operation and response teams. All emergency calls are received at the Unit 1 Control Room by radio or phone and are dispatched from there. Beard or his staff assign crews to respond.

NGS is protected by 67 water-based sprinkler systems that the Fire Department maintains. These protect all of the plant’s coal belts, transformers, the power block and buildings.

In strategic locations throughout the power plant are fire hose cabinets, seven fire pumps, 35,000 feet of fire hose and 120 fire hydrants. All of that needs to be tested, inspected and maintained throughout the year, he said.

In addition to the potential for fire hazards and work-related injuries or accidents that require emergency medical attention, the EMTs and ERT must prepare for more specialized problems, Beard said.

“We have to cover some hazardous materials response and some technical rescue, confined-space rescue and the firefighting aspect every quarter,” he said. “We have to make sure that entire group of people gets the same consistent training.”

All EMTs and ERT members must train for at least 12 hours each quarter. In September, however, ERT members from each work shift trained for 24 hours straight.

“We take whatever scenario we can dream up out here,” Beard said. “We have electricians who have to go up in the stack. They have to perform maintenance up there, changing out the lights. They’re always worried that if something happens to them, how are they going to get out of there? We simulate that training.”

To do that, ERT members must suit up in harnesses, helmets, don all their rope rescue equipment, and ascend the 775-foot stacks to simulate a high-elevation, confined-space rescue, he said.

Many NGS employees live in areas that can be up to 90 miles away from any health care or emergency response, said NGS Operations Manager Ed Irvin.

“Having our people trained reaches out past the fence line of NGS,” he said. “We are touching the lives of many surrounding communities where our people live.”

Raelene Beatty works in the Fire Department as a fire technician and EMT. She’s been at NGS for 14 years and began in the Operations Department.

She said she became an EMT because she lives in a remote and rural part of the state where long-distance travel is a way of life. That increases the chance of coming upon a highway accident when other help may be far away.

Her job and training makes her feel she’s making a real difference for herself, her family and others within her own community, she said.

“Here at NGS we have a lot of opportunities, just like the EMT program,” Beatty said. “We can go to school if we want, take college classes and it’ll be paid for. It’s a good job. I’ve taken care of my family all these years.”

Salt River Project, which manages NGS, recognizes the value of an educated and skilled work force. It supports employee academic and professional growth through a college reimbursement program called the Tuition Assistance Program. It is designed to provide financial assistance with the cost of enrollment in college and university classes.

Erwin Roan is an NGS Fire Specialist who moved from the NGS Safety Department to the Fire Department. He became an EMT seven years ago because he thought it would be an important part of his job when other employees had questions about the training.

“It’s all a secondary skill for us,” he said. “We’re not employed by SRP to be EMTs or Emergency Response Team members. It’s just a secondary skill that we’re able to pick up. That’s one of the things about SRP where they give you these educational opportunities where you can better yourself, where you’re helping people, not just with your employees but out in the community.”

NGS has a mutual aid agreement with the city of Page and the National Park Service to offer assistance when either of their fire departments are dealing with an emergency and could use extra hands, he said.

“In the event that something happens, we’re here, we’re available for them,” Roan said. “With the training that we get, I feel that we’re available and we’re ready for whatever call we get out there.”

The NGS ERT has 130 members trained in structural firefighting, hazardous materials response and technical rescue. Some are incident commanders. Others operate as support to prepare responders for the emergency and others conduct the rescue operations.

“SRP puts a lot of money into those people to get them trained to make sure that they work safely,” Roan said. “That minimizes the amount of calls we get out here for emergency response or EMT calls.”

Chris Mallahan is an O&M 3 Operator who was with the ERT that responded to a transformer fire near the power block earlier this year. He said he heard the call on his radio, went to the Fire Shop, put on his personal protective turnout and was on the fire engine that responded.

Within five minutes the ERT was at the scene. It was able to quickly contain the flames, de-energize the equipment and spray down the area with fire-retardant foam. Having both EMTs and an Emergency Response Team stationed at NGS is not just a good idea, Mallahan said.

“I think it’s critical,” he said. “There are times when you need someone who is experienced with the machines and all of the equipment out here. And you need them right away in order to prevent incidents from growing.”

The training ERT members receive builds upon NGS’s first priority of safety and further implements the culture of its SAFE program:

Safety trumps production, accept accountability for working safely, family and loved ones deserve to have us home injury-free and everyone is responsible for the safety of those around them.

“It’s a mindset and a preventative measure, knowing what to look out for, to think ahead,” Mallahan said. “The training has paid off and it has made a difference for me. I am grateful to be involved in it.”