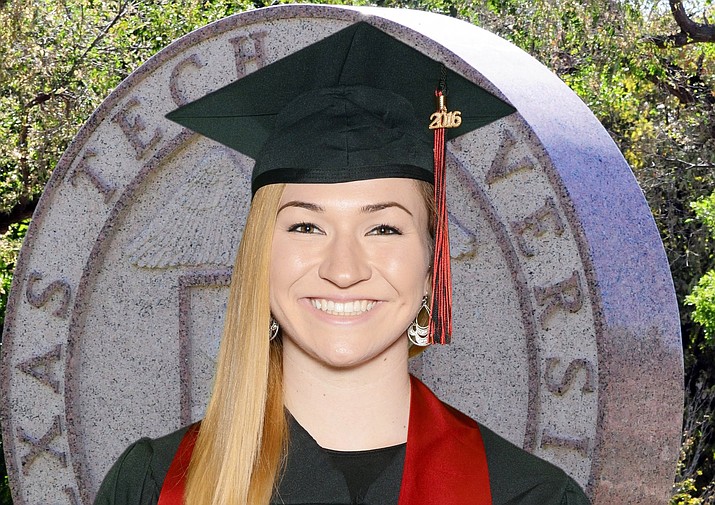 Jamie Roe graduated from Tuba City in 2012 and Texas Technical University in 2016. Roe said her experiences and education helped her with her first teaching job at Sharp Academy. Photo/Rosanda Suetopka

TUBA CITY, Ariz. – Jamie Roe is making strides in the specialized field of education by working with and teaching students who have dyslexia, ADHD and ADD at Sharp Academy in Texas.

Roe is the daughter of Tuba City District administrators Sandra Roe and Jamie Roe. Sandra Rod is the Exceptional Students Services director at Tuba City Unified School District (TCUSD) and her father, Jamie is the long time athletic director at the school.

Roe, is from the Cherokee Nation but was born and raised in Tuba City. Her parents have worked at Hopi High School on the Hopi Reservation and at Tuba City School District, where they have worked for more than 20 years as administrators.

Roe graduated from Tuba High in 2012 and along with being in the top five of her class she was named Academic All-American by the United Dairyman’s Association of Arizona, Arizona All-State Volleyball and All State Basketball and won the distinguished title of Arizona Small School Player of the Year by the Arizona Republic newspaper.

After high school, Roe went onto Texas Technical University. She graduated in 2016 and accepted a job at Sharp Academy as a teacher.

Roe comes from a long line of teaching professionals, including her grandparents and several of her aunts, uncles as well as her parents.

Roe is a self-professed science nerd and said she takes every science class possible. As a nutrition major her coursework covered all of biology and chemistry related classes.

She said all of her science background is now paying off.

Roe currently works with students who have some brain and learning differences and her extensive science knowledge of how the brain works and more importantly doesn’t work is helping her understand and guide her students who have dyslexic, ADHD and ADD.

“I’ve always had an interest in students who had some difficulties in school because of their special learning circumstances,” Roe said. “It also might be because I could see my mom working with students who had special needs in the education area. My mom became one of my more important career role models just showing me how much patience it takes to help a special student become successful.”

Roe’s academic success is paying off and has helped her become a responsible community builder and contributor.

Roe credits her home community and her family and friends living in Tuba City and Moencopi with her teaching success at Sharp.

“I’m lucky I came from such a supportive community, high school and loving family,” she said. “When I feel there is an obstacle in my work, I just think of my family and friends in Tuba City and Moencopi who are counting on me to get through it. This is a big motivator.”