Another Navajo committee votes no on Escalade 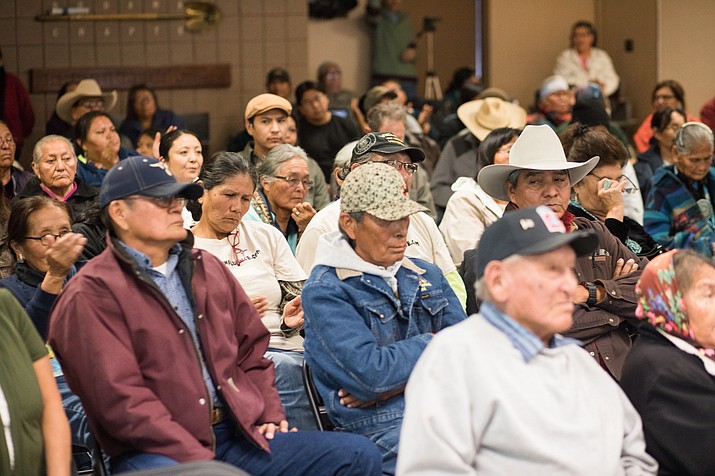 Members of the Bodaway/Gap community, among others, listen during a meeting of the Resource and Development Committee before a final vote tabled the Escalade proposal Jan. 11. Photo/Ryan Williams Photography

BODAWAY/GAP, Ariz. — Citing concerns about water, the community and projected revenues, the Budget and Finance Committee (BFC) voted against approving the master agreement for development of Grand Canyon Escalade Feb. 21.

The master agreement includes the approval of $65 million to develop offsite infrastructure for the project and would also authorize the Navajo Nation Hospitality Enterprise to enter into a development and operating agreement, approve a non-compete agreement, waive certain provisions of the Navajo Nation Code and accept the approval of a land withdrawal in the Bodaway/Gap Chapter.

Confluence Partners, LLC, from Scottsdale, Arizona, hopes to build a gondola tramway delivering visitors to the canyon floor in about 10 minutes. The project would include a river walk in the canyon with an elevated walk way and a food pavilion. The area is located on the western edge of the Navajo Nation at the confluence of the Little Colorado River and the Colorado River about 100 miles by road from I-40 and Flagstaff, Arizona.

The 47,000 square feet of retail and restaurants on the rim will also include a Navajoland Discovery Center, specialty retail stores, restaurants, artist in residence studios, vendor markets, tourism information center, rim trails, entertainment lawn, public safety office, hotels, gas station, RV park and provide water lines, roads, electric services, sewer treatment plant and communications for the area, according to former Rep. Albert Hale, Confluence Partners agent. He said the tramway would be 1.6 miles long and approximately 3,200 feet from the rim of the canyon to the Riverwalk and the Riverwalk stops more than 300 feet from the Confluence and the preservation area.

BFC vice chair Council Delegate Dwight Witherspoon said it is important to answer several critical questions regarding the proposed development project to ensure the community and its water is safeguarded.

“I do not see specific citations in your report that support the figures you are providing in the presentation, so I believe that would be important to provide to this committee, and second, where is the water going to come from to support this project? It is going to take substantial water resources for this project,” Witherspoon said.

Representatives from the Confluence Partners, L.L.C. responded saying they would provide council members with citations for its data and calculations of the projected revenues. They added that the Navajo Nation Department of Water Resources indicated that a water pipeline that runs near the Gap community is sufficient enough to support the project.

Hale said the project could create nearly 3,500 jobs with employee compensation at about $39,000 per year in salary, and could generate revenues over $50 billion in the span of 50 years.

BFC member Council Delegate Leonard Tsosie said if the project is to move forward, the Confluence Partners, L.L.C. must be committed to the project and sign an agreement to see the project through in its entirety.

Tsosie also raised concerns regarding a non-compete clause in the legislation and said that Navajo-owned businesses and entrepreneurs should also be allowed to profit from the project, if it should be approved. He added that local communities should be a part of the discussion and have a say in the development of their chapter area.

During the discussion, BFC chair Council Delegate Seth Damon allowed time for 18 members of the public seated in the audience to speak openly to share their views and concerns regarding the project. Of the 18 who spoke, seven opposed and six supported the legislation, the remaining three had questions regarding the proposed project.

Save the Confluence, an organization made up of some families in the area, commended the committee for allowing Bodaway/Gap Chapter land users and residents to speak about how the Escalade project would impact them, a unique decision because other committees allowed only elected or local leaders to speak.

“The land users spoke from their hearts about issues, such as no consent from the most impacted land users and permit holders, the reverence and requests for traditional and cultural holy spaces and places, the concern of the disharmony created by outside people on the community,” Save the Confluence said.

BFC member Council Delegate Tuchoney Sim, Jr. encouraged the community to complete its own due diligence of the proposed Escalade Project and the impacts it would have on the community, despite the supporting resolution of the Escalade Project by the former Bodaway/Gap Chapter administration.

“Don’t let someone else propose it, do the development on your own,” Slim said. “Your chapter needs to do its own due diligence on these entities proposing this project. I would support this initiative if the chapter can show me they are trying to be a part of the process.”

Slim ended up voting against the legislation.