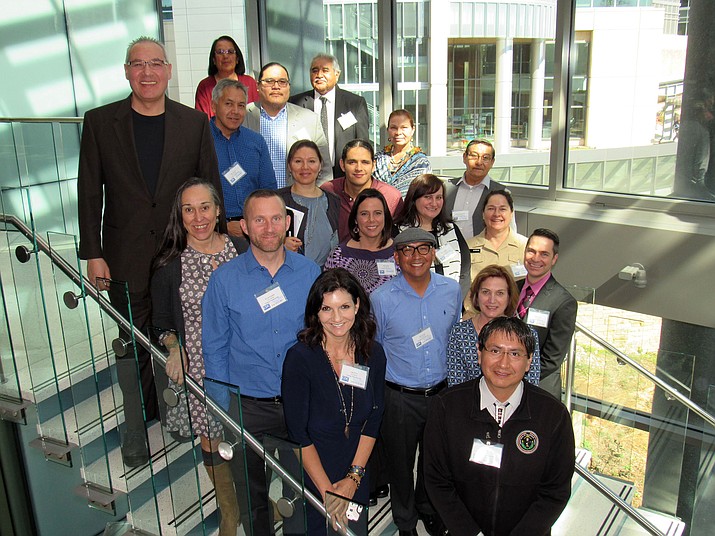 Officials from the Navajo Nation at the CDC in Atlanta. Officials state that repealing the Affordable Care Act will have significant repercussions to Indian Health Services on the Navajo Reservation. Submitted photo

WINDOW ROCK, Ariz. — The Navajo Nation Council convened in a special session Feb. 16 and unanimously approved legislation requesting Congress to retain the Indian Healthcare Improvement Act, which was included as part of the Affordable Care Act in 2010.

Council Delegate Jonathan Hale (Oak Springs, St. Michaels) who serves as the chair of the council’s Health, Education and Human Services Committee, introduced the legislation following statements from the Trump administration and congressional members calling for the repeal of the Affordable Care Act, which is often referred to as “Obamacare.”

The resolution outlines the many benefits that the Navajo Nation receives under the Indian Healthcare Improvement Act, particularly as they relate to Indian Health Service and for Native Americans living in rural and urban areas. The law was first enacted in 1976 and permanently enacted in 2010 as part of the Affordable Care Act.

Health program manager for the Health Education HIV Prevention Program, Philene S. Herrera, joined Hale during the session and provided a summary of the potential impacts for the Navajo Nation Department of Health if the Indian Healthcare Improvement Act were to be repealed.

Herrera stated that the Navajo Nation would stand to lose approximately $38 million annually, which the Nation received in 2017, in federal funding that would impact a variety of services including social services, emergency management services, behavioral health services, HIV prevention and screening services, health education services, epidemiology services and health services provided to Navajo veterans. She added that a total of 388 positions would also be impacted within the Navajo Nation Department of Health if a repeal occurred.

The data provided by the Department of Health Feb. 16 only conveys a portion of the overall impact for the Navajo Nation, according to Hale. Indian Health Service (IHS) and programs funded through 638 contracts maintain separate data, so the overall impact would be much larger beyond the information provided by Herrera.

According to Herrera, approximately $80,000 is spent each year for each patient that receives dialysis treatments, which highlights the importance of educating the public to prevent health issues and disabilities that lead to high treatment costs.

The Navajo Nation Department of Health’s website states that the goal of CHR’s is to improve the general health status of the Navajo people through direct home health care, community health care and health education in coordination with tribal and IHS programs. The program serves approximately 210,000 Navajo individuals both on and around the Navajo Nation. The Outreach program continues to provide related services to control sexually transmitted diseases and tuberculosis on the Navajo Nation and surrounding areas.

“All of the services would be jeopardized if a repeal were to occur,” Hale said. “When the Indian Healthcare Improvement Act was passed in 1976, it had bipartisan support from Democrats and Republicans so it is important that both sides recognize the importance of keeping it in place.”

“As you consider a path forward on healthcare reform, I, as a leader of the Navajo Nation, urge you to ensure that this law is preserved so the Indian health system can continue to operate under a framework appropriate for 21st century healthcare delivery and honors the United States’ trust responsibility to provide healthcare to American Indians and Alaska Natives,” Hale wrote.

The Navajo Nation Council voted 14-0 in support of Legislation No. 0039-17 and serves as the final authority for the bill.

“This tribal advisory committee benefits all tribal communities and broadens understanding of all people in this discussion,” Nez said. “It will take a collective voice from all tribal nations to keep the Tribal Advisory Committees, the Indian Health Care Improvement Act, and the Affordable Care Act in place within the Trump administration.”

He voiced the Navajo Nation’s support to increase resources to prevent chronic diseases and suicide. Cultural sensitivity training and consultation was mentioned as a high priority to CDC representatives to ensure effective nation-to-nation dialogue.

“I would like to see a fully functional epidemiology center on the Navajo Nation to conduct research and propose cost-effective strategies of disease prevention and health care delivery,” said Del Yazzie, acting director of the Navajo Epidemiology Center.

TAC provides CDC and the Agency for Toxic Substances and Disease Registry with recommendations and guidance on policies, guidelines, and programmatic issues affecting the health of American Indian and Alaska Native tribes. The committee is composed of 16 delegates and authorized representatives from federally recognized tribes, each acting on behalf of his or her tribe.

CDC expressed interest in certifying tribal emergency response teams so that they are prepared in the event of a catastrophe.

The next TAC meeting has been tentatively scheduled to take place on Aug. 8 and 9.