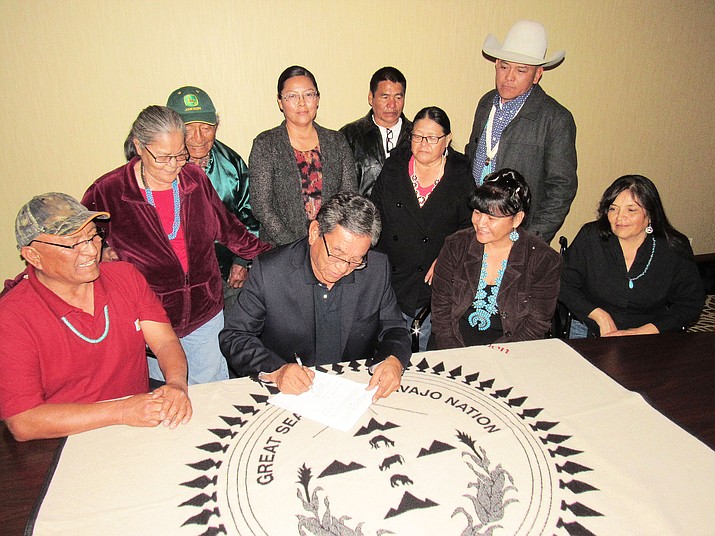 Navajo President Russell Begaye signs legislation approving nearly $255,000 for construction to start on 10 homes in the Bennett Freeze area on the western side of the Navajo reservation. Submitted photo

“The Office of the President and Vice President (OPVP) wants to do more,” Begaye said. “We want to see more electric lines, septic tanks, and water lines in the former [Bennett Freeze] area. We’d like to see Escrow funds used for renovation and new homes as opposed to dipping into UUFB,” Begaye said. “We are excited about this legislation and we want to work together with the former Bennett Freeze chapters. Show us your plans and let’s bring development to the whole [Bennett Freeze] area.”

Council Delegate Slim, sponsor of the bill, said the initiative was very important for the community of Tonalea and signifies the beginning of real rehabilitation efforts within the Former Bennett Freeze Area (FBFA).

“This project gives strength and hope back to the Navajo people to begin their own initiatives and make them believe that they don’t have to rely on the government to do this for them,” he said. “This is what empowering our people looks like, to make significant changes within their communities through hard work and advocacy.”

Slim added that the project would not have been possible without the strong leadership and advocacy of the Tonalea Community Development Committee and Tonalea Chapter, who were also present at the signing ceremony.

Slim said that ever since the lifting of the freeze in 2009, the people in the FBFA communities have been very hopeful.

“A year and a half ago when the three branches of government came together to re-engage in the rehabilitation of the FBFA, a lot of hope was instilled in the heart of the community elders,” Slim said. “Our community started to build capacity at the grassroots level. We used and believe in sweat equity.”

Council Delegate Walter Phelps (Cameron, Coalmine Canyon, Leupp, Tolani Lake, Tsidi To’ii), chair of the Navajo-Hopi Land Commission, said the pilot project was a well thought out initiative that could not have been achieved without the cooperation of the community and the Navajo Division of Community Development (NDCD).

“We commend the Tonalea community and NDCD for their diligence in coming forward with a comprehensive proposal, which was supported by council,” Phelps said. “This demonstrates that our leaders are willing to embrace solutions that are well thought out and planned by our Navajo communities.”

Delegate Phelps added that what sold the initiative to the council is that the community demonstrated strong matching funds, which is a true example of self-determination and self-governance at the chapter level.

Cindy S. Covey, TCDC chair, strongly advocated for the pilot project since its inception and expressed gratitude for council’s support of the initiative.

“Thank you to the 23rd NNC for your support of this housing project, she said. “Today, President Begaye signed it into law and we can begin constructing homes for families in most need. I want to thank the Council members who supported us and gave our area a voice, most especially Delegate Slim for always advocating for us at the central government level.”

In 1966, commissioner of the Bureau of Indian Affairs Robert Bennett ceased development of approximately 1.6 million acres of land that was in dispute by the Navajo Nation and Hopi Tribe, which prohibited Navajo families from making any improvements to their homes or to construct new homes in the area for nearly 50 years.

Congress passed the Navajo-Hopi Settlement Act and in 2009, and former U.S. President Barack Obama officially lifted the freeze on development in the area, allowing for residents to begin constructing and rehabilitating homes and facilities.

“This is just the beginning,” Begaye said. “We have to continue making progressive change. That is how you become successful. OPVP is looking forward to future projects and we are committed to supporting development within the FBFA.”