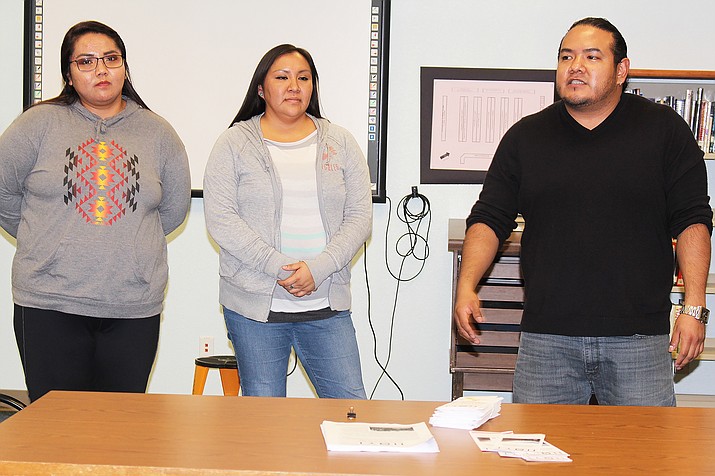 POLACCA, Ariz. — The Hopi Opportunity Youth Initiative (HOYI), an arm of the Hopi Foundation, has formed a partnership with Hopi High School’s AVID program to show support for students.

AVID is a program that helps students prepare for college.

Knox said HOYI creates programs that don’t exist or partners with programs that do exist in order to do work by the youth for the youth. He said a recent listening session with 50 youth showed three pathways they want to prioritize peer mentoring, community service learning and cultural attainment.

Hannah Honani, program associate for HOYI, said one of HOYI’s most successful programs is its peer mentoring program.

“These kids want mentoring. I appreciate the students who are stepping up and taking control of their education,” she said.

Honani said HOYI wants to bridge the gap between the community, the students and the schools.

“Parents look to have their children engaged,” she said.

“Their eyes got big when they realized there are all types of jobs out there,” she said.

Some of the students were interested in jobs that are not offered on the Hopi Reservation. So, James told them to go to college and bring those jobs back to Hopi.

“There is always more we can do,” she said. “We’re glad to collaborate with AVID.”

James, a former Miss Hopi and a national journalism award winner, said if any teachers at Hopi Jr/Sr High are interested in learning more about HOYI, they are just an email away.

During the school board meeting, interim Hopi Jr/Sr High School Superintendent Alban Naha praised the AVID program as a support group for students needing assistance and guidance. He said AVID students work together to improve their reading and writing skills. He said AVID students improved their test scores and attendance.

“We started the program slow because we want to do it right,” he said. “But now we’re reaching out to other organizations.”

Naha said the AVID students made posters that showed their test scores increasing.

“When the students create their ownership, they want to improve their test scores,” he said.

The HJSHS Governing Board approved an AVID trip to colleges in New Mexico during spring break. The trip will cost $5,943 with HOYI pitching in $1,500 and supplying chaperones and leadership. AVID raised $1,000 and Hopi Jr/Sr High School is providing the rest.

Board President Ivan Sidney said he looks forward to hearing good reports about the trip.

In other school business, Sidney welcomed Jason Lobik as the new principal at Hopi High and Charlene Youvella as the new dean of students at Hopi Jr/Sr High School.

The school board agreed to advertise two positions for special education paraprofessionals.

Board member Poleyestewa told Michael Adams, director of psychological services, that she wants to see his plans and goals.

“I want to see the numbers to see where you are succeeding,” she said.

Poleyestewa said she wanted to see the other counselors at Hopi Jr/Sr High School more involved so that everybody is helping.

Lobik said he was excited about getting to know the staff and students. He likes the school’s math intervention program and the AVID class.

“People are supportive and friendly. Mr. Naha setup an orientation with departments. I was impressed because that doesn’t happen everywhere,” he said.

Lobik said Youvella and he see the future of the school in the same way. He said he went into each class to introduce himself to the students rather than calling a big assembly. He has also been doing the same with staff. Poleyestewa told him to keep his classroom visits going.

In Hopi Junior High news, Sidney reported that the enrollment is 90 students in the seventh grade and 69 students in the eighth grade. She said there is an opening for two social studies teachers at the junior high.

She said Hopi Junior High is recruiting students to attend the Close Up trip to Washington D.C. in April and the Gifted and Talented students attended Tribal Nations Day in January.

Sidney informed parents during the PAC meeting that Hopi Behavioral Health has a program “Above the Influence” where Kathy Gardener comes in to work with seventh graders twice a week for ten weeks.

Sidney said the junior high has initiatives to improve communication with parents, have common discipline practices and establish clear expectations of the students in the classroom. She said they are also working on curriculum mapping to improve course skills and institutional practices.