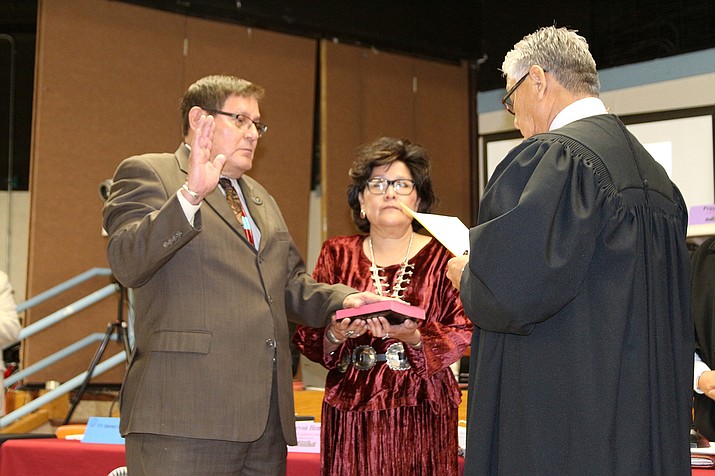 Chief Justice Allen Sloan administers the oath of office to LoRenzo Bates as he prepares to serve his second term. Submitted photo

Bates was administered the oath of office by acting Chief Justice Allen Sloan.

“I am honored and thankful to my council colleagues for their support and I look forward to serving the council and all of our Diné citizens for two more years in this capacity,” Bates said.

The selection of the speaker began with open nominations, which allowed an unlimited number of nominees to be considered for the position. The nominees included Council Delegate Otto Tso (Tó Nanees Dizi) and Bates.

Each of the two nominees were then provided 15 minutes to present their platform to the 24-member council. Tso received six supporting votes, while Bates received 16 supporting votes to secure his second term.

Bates presented a platform centered on the accomplishments of the current council, including the approval of the largest spending packages in the history of the Navajo government — with more than $330 million for water infrastructure projects, economic development projects, community development and agricultural projects.

Bates also emphasized the need for the council to stay the course on its ongoing initiatives, including the negotiation of an amended gaming compact with the state of Arizona, the settlement of water rights for the Little Colorado River, the ongoing implementation of water infrastructure projects and several others.

“I am confident that this council will move forward together with ongoing initiatives to help the Navajo Nation, which includes our elders, youth, veterans and many more,” Bates said.

The speaker of the council serves a term of two year at the pleasure of the Navajo Nation Council.