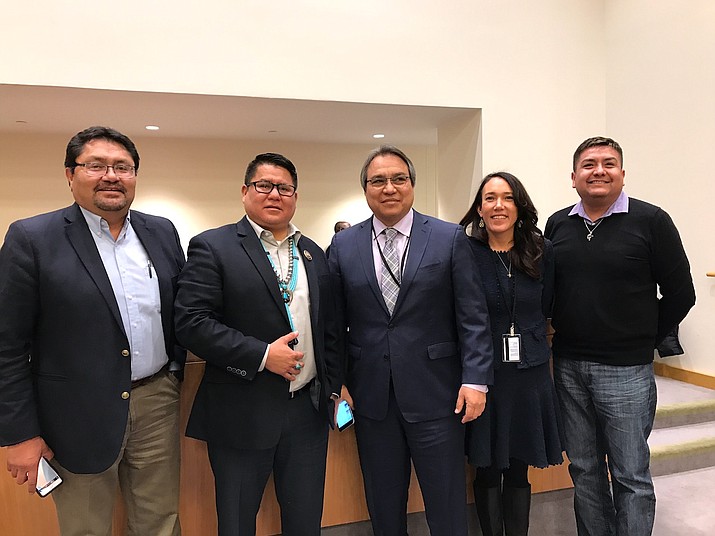 Navajo Nation Delegate Nathaniel Brown spoke to the United Nations reasons why the Navajo Nation, as a sovereign nation, should have representation with the UN. Submitted photo

Council Delegate Nathaniel Brown (Chilchinbeto, Dennehotso, Kayenta), along with several other indigenous nations, attended the Intervention on Enabling the Participation of Indigenous Governing Institutions at the United Nations on Participation Modalities last week. There, Brown presented before the UN and said the Navajo Nation should no longer be considered a non-governmental organization, or NGO, because of the Nation’s sovereign status, which allows its citizens to elect officials to represent the Nation on behalf of the Navajo people.

“While NGOs and civil societies enjoy the privilege of participating in the United Nations, indigenous nations with elected officials that are responsible to their people are limited in full participation within the UN,” Brown said. “These include the right to speak, recommend agenda items, have a seat in the General Assembly and submit written comments and recommendations.”

Brown said the UN must establish a new category that ensures that indigenous governing institutions are, at the very minimum, able to participate in all meetings to the fullest extent regarding issues that may affect the Navajo people, their land, territories and resources.

Brown also stressed the importance of supporting other indigenous nations from around the world because they all face many of the same important issues that affect their people and land.

“We are working to continue addressing human rights issues that are critical to aid in shaping our laws to honor and protect our women and all indigenous people,” Brown said. “Now, more than ever, we as indigenous people need to speak up to protect our natural resources, land, water, sacred sites, language and culture for our future generations.”

Brown added that as elected delegates of the Navajo Nation, there is a need to ensure delegates have a voice within the international arena, which will encourage further progress toward self-determination and Diné sustainability for younger generations to come.

“[The] Navajo Nation has been involved in international advocacy for several decades,” Gorman said. “Along the way, Navajo has had input in the adoption of UNDRIP, American Declaration, and now formulating procedures for indigenous peoples to participate in the UN systems as nations and governments. They need to have a seat at the UN table and speak out for our Navajo people.”