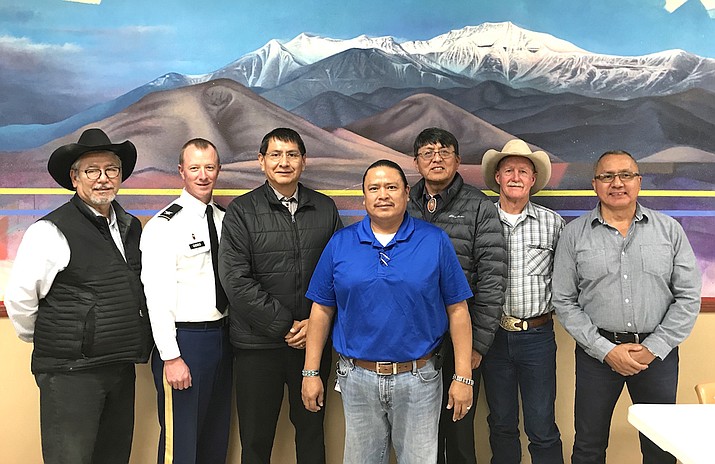 LEUPP, Ariz. — On Dec. 6, Resources and Development Committee (RDC) members welcomed the U.S. Army Corps of Engineers Colonel Kirk E. Gibbs and his regional staff to the community of Leupp, expressing their appreciation of initiating watershed studies across the Navajo Nation.

The studies resulted from a successful intergovernmental partnership between the Navajo Nation and the U.S. Army Corps of Engineers.

The Army Corps of Engineers plans, designs, constructs and manages projects for national, economic and environmental security. They are the world’s premier engineering organization, with more than 37,000 professionals in technical centers, and regional and field offices worldwide.

Additionally, the U.S. Army Corps of Engineers has a unique trust relationship with Native tribes based on the U.S. Constitution, treaties, statutes, court decisions and executive orders to protect and preserve tribal resources.

In September, the Navajo Nation and the Army Corps of Engineers signed a cost-share agreement, which allows the Army Corps of Engineers to conduct activities related to surveys and to provide technical planning and design assistance for watershed management, restoration and development on the Nation. The study areas include Window Rock, Ft. Defiance, Chinle, Many Farms, Kayenta and Tuba City.

Council Delegate Walter Phelps (Cameron, Coalmine Canyon, Leupp, Tolani Lake, Tsidi To ii) who played an instrumental role in working with the Army Corps of Engineers to initiate the watershed projects, expressed his appreciation and stated that the project would guide future investments in natural resources and infrastructure.

“This amazing project is the first of its kind and it would provide many opportunities and benefits for the people and livestock. Watershed is the key to maintaining, servicing, and preserving our Nation’s water resources. This is only the beginning to improve water quality, range management, land use planning and infrastructure development,” Phelps said.

According to Col. Gibbs, the final product of the watershed studies would help objectives such as reducing flood risk, improving natural sediment balance and conveyance, restoring native vegetation, improving range management and land use planning, removing and managing invasive species, and improving water quality in ground and surface waters.

“The Nation has been lacking comprehensive flood plain studies, but now we will have access to reliable data that would provide many opportunities for the local chapters. This could not have been possible without the support and assistance from the Army Corps of Engineers,” he said.

“Intergovernmental partnerships made this possible, which is a goal of the Navajo Nation Council. Without the enthusiasm from community members, chapters, and local leadership, this project would not have been possible or initiated,” Shepherd said.

“This project marks the first steps to future partnerships with the U.S. Army Corps of Engineers,” Phelps said, adding that the completion of the watershed studies is expected within three years.