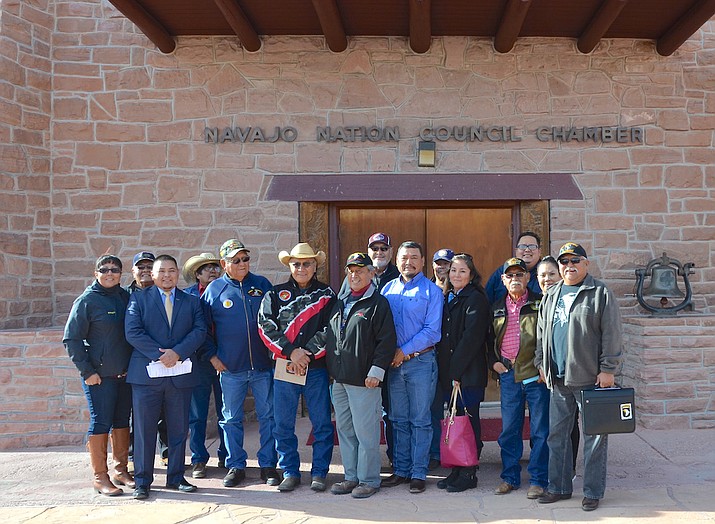 The vote by the Naabik’íyáti’ Committee was strongly supported by Navajo veterans, several of whom were in attendance to support the effort of the Council to override the president’s veto. Many of them have also expressed their disappointment with the Office of the President and Vice President’s (OPVP) failure to help Navajo veterans, which is one of the president’s “four pillars” that helped him get elected.

In several recent statements issued by the OPVP, Begaye and Vice President Jonathan Nez have indicated that the council is attempting to utilize the principal of the Veterans Trust Fund, which is completely inaccurate, according to Council Delegate Tom Chee (Shiprock), who is sponsoring the legislation to override the president’s veto.

“The bottom line is that we are trying to clarify the definitions that guide the administration of funds within the Veterans Trust Fund in order to provide more dollars for direct services for Navajo veterans,” Chee said, adding that the president’s veto misinterprets the legislation by stating that it uses the principal of the trust fund, which is completely incorrect.

Chee emphasized that the legislation does not cease funding for the veterans housing program, nor does it diminish the growth of the Veterans Trust Fund principal, as wrongfully stated by President Begaye in his veto message and in a letter addressed to the Council.

In the letter to the Council, Begaye requested a meeting to discuss the legislation, however, Council Delegate Seth Damon (Bááháálí, Chichiltah, Manuelito, Tsé Lichíí’, Rock Springs, Tsayatoh) pointed out that council members and veterans groups have invited the president and his staff to meetings as the legislation was being developed, but they did not receive responses to their numerous requests.

Delegate Damon said council members have met on many occasions with various veteran groups to develop the Veterans Trust Fund Income Act. He added that Legislation No. 0191-17, a separate bill that he is sponsoring, would increase the annual set-aside from four-percent of the Nation’s annual revenues to 10-percent.

During a recent meeting with veterans commanders, it was explained that in 2016 the OPVP utilized $800,000 above the interest income that was available for the Navajo Veterans Administration — an action that Speaker LoRenzo Bates (Nenahnezad, Newcomb, San Juan, Tiis Tsoh Sikaad, Tse’Daa’Kaan, Upper Fruitland) said would break Navajo law because the president is possibly utilizing the trust fund principal to make up for the funding shortage without approval.

Bates also said that as a former member of the council, Begaye and Nez, who previously served as the Budget and Finance Committee chair, should clearly understand the processes and the intent of council’s actions.

“The council has the support of Navajo veterans and today’s vote by the Naabik’íyáti’ Committee sends a strong message to the President and Vice President,” he said.

The Navajo Nation Veterans Advisory Council, which is comprised of Navajo veterans and tasked with directly advising Begaye on veteran’s issues, also passed a resolution supporting the proposed override. Veterans in attendance Dec. 4, said they anticipate more supporting resolutions to be passed.

The Naabik’íyáti’ Committee supported the legislation, 18-0. The Navajo Nation Council serves as the final authority for the bill.