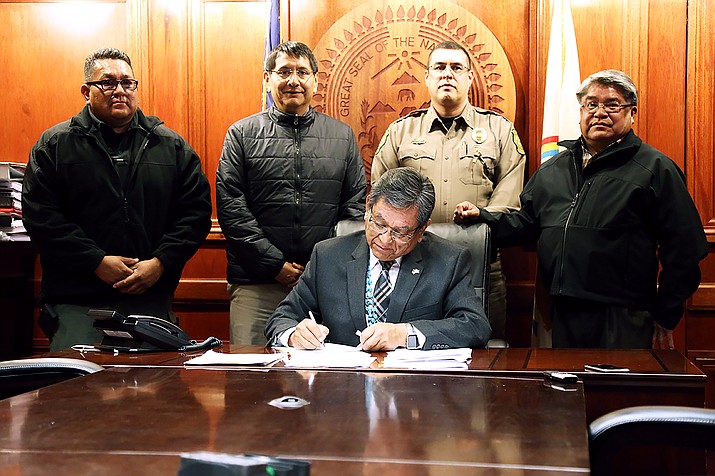 The Naabik’íyáti’ Committee’s Sexual Assault Prevention Subcommittee applauded the agreement for the mass notification software system that would send out emergency alerts, such as the AMBER Alert, to Navajo communities within the states of Arizona, New Mexico, and Utah.

“The SAP Subcommittee requested several reports and updates from the Navajo Nation Department of Emergency Management (NNDEM) and the Office of the President and Vice President regarding the implementation of the AMBER Alert system over the last year. We have been diligently tracking its progress since this issue was raised by Council in May 2016, and we will continue to do so until it has been fully implemented,” Crotty said.

The Navajo Nation had previously negotiated the use of New Mexico, Arizona and Utah’s AMBER Alert system. However, the extra steps to run through all three states delayed notifications.

“Back in May, Delegate Crotty provided testimony to the U.S. Senate Committee on Indian Affairs to advocate on behalf of S. 772, a bill that allows tribes access to AMBER Alert grants. Although the actual system is vital, subcommittee members have been working diligently to ensure the future and resources for our AMBER Alert system, and advocacy does not end once it is implemented,” Brown said.

He added that the AMBER Alert system would also provide protections against human trafficking, suicide prevention, and the overall safety of Navajo children. Delegate Brown said that training and education of the official protocol for the system needs to be provided to the Navajo public, programs, schools, and chapters.

Crotty said the tragic events of Ashlynne and Ian Mike spurred the council to create the Naabik’íyáti’ Committee’s Sexual Assault Prevention Subcommittee to develop safety initiatives and policy changes to amend the Nation’s laws and programs to prevent sexual assault and child abduction.

“I commend the efforts of Gary Mike and Pamela Foster, the parents of Ashlynne, for being the strong voices at the forefront to push for the implementation of the AMBER Alert system on the Navajo Nation. Their advocacy has been a critical resource in providing safety to our Navajo children,” Crotty said.

“We always pray that we will never have another abduction, but we need this in place so that the whole Nation can be alert and help make sure that a child is recovered safely and quickly,” Begaye said. “I appreciate the work of everyone that made this possible. This will make life safer here on the Navajo Nation.”

Vice President Jonathan Nez said that with the purchase, the Navajo Nation will have the ability to issue its own notifications immediately.

“We are proud to be the first tribe to have our own alert system now in place for the safety of our people,” he said.

Once installed, the emergency alert system will officially be under the Navajo Division of Public Safety (NDPS) and managed by the Navajo Department of Emergency Management (NDEM). NDEM expects to have the software deployed for use by the end of the year.

“We’re very interested in improving the efficiency of services to the Navajo people,” Jesse Delmar, director of DPS, said. “We’re glad to be a part of this and what we’re so proud of is never before has an independent tribe had this system to themselves.”

With the mass notification software, the department is able to issue alerts for a variety of emergencies — not only for AMBER Alerts, which was the only emergency alert situation covered in the agreement between the tribe and states.

In May 2016, Begaye gave the directive for the Navajo Nation to secure an AMBER Alert system. Before the end of the year, the Navajo Nation signed a memorandum of understanding with the Federal Emergency Management Agency (FEMA) to allow Navajo public safety officials the authority to access the Integrated Public Alert and Warning System (IPAWS).

With training and certification to use IPAWS, the next step in the process was to go through the procurement process and internal checks-and-balances of the Navajo Nation to purchase the software. The Navajo Nation chose Everbridge.

“In an emergency situation, time is of the essence to get information out to community members,” said Harland Cleveland, acting NDEM director. “Especially, in the instance of a child abduction, the public is our eyes and ears.”

According to Cleveland, with the president’s signing, the Navajo Nation will have the capability to push alerts over radio, television and text messaging to all 11 counties that fall within the Nation’s borders. In the future, efforts will be made to add a Blue Alert and Silver Alert to the system.