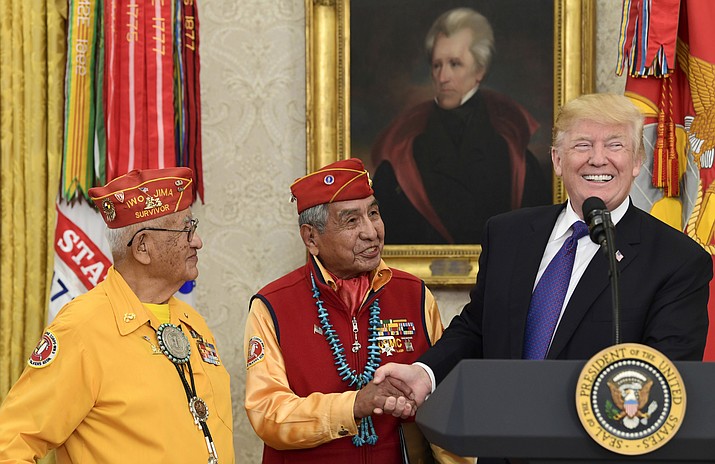 The comment came during an Oval Office event during which Trump largely heaped praise on the Code Talkers, Native American soldiers who used indigenous languages as the basis for codes that the Japanese were unable to break during World War II.

But as he was praising the three Code Talkers who were present for the event, Trump added that they were “here long before any of us were here, although we have a representative in Congress who, they say, was here a long time ago. They call her ‘Pocahontas.’”

It was an apparent reference to Sen. Elizabeth Warren, D-Massachusetts, who earned the nickname from Trump during last year’s campaign in response to her claim that she had Native American heritage. When the comment was met with silence Monday, the president quickly moved on, but advocates had already taken note.

“We regret that the president’s use of the name Pocahontas as a slur to insult a political adversary is overshadowing the true purpose of today’s White House ceremony,” said National Congress of American Indians President Jefferson Keel in a statement Monday.

NCAI in May condemned Trump’s use of the name Pocahontas and “other such terms that insult Native peoples and degrade their cultures in order to score political points.”

A statement from the Navajo Nation called the latest comment another example of the “unfortunate historical legacy” that has left Native Americans to “battle insensitive references to our people.”

“As Native Americans, we are proud people who have taken care of this land long before there was the United States of America and we will continue to fight for this nation,” Navajo Nation President Russell Begaye said in a prepared statement.

Trump’s offhand comment overshadowed the “honor and recognition that has been bestowed upon the Navajo Code Talkers,” Begaye’s statement said. “It was our Code Talkers that ensured the freedom of the United States and that’s what is important to remember here,”

Begaye said the Navajo do not want to “engage in this dialogue” between Warren and Trump, but Warren called the president’s comments “deeply unfortunate” at an event “to honor heroes, people who put it all on the line for our country.”

“The president of the United States cannot even make it through a ceremony honoring these heroes, without throwing out a racial slur,” Warren said in an interview on MSNBC.

That was echoed by Arizona Democrats, with Rep. Raul Grijalva, D-Tucson, tweeting that Trump’s comment “is offensive and shows his complete ignorance,” while Rep. Ruben Gallego, D-Phoenix, asked the president on Twitter, “Have you no shame?” Rep. Tom O’Halleran, D-Sedona, said in a statement that the comments were “callous and insulting.”

But when asked by reporters Monday whether the term was a slur, White House spokeswoman Sarah Huckabee Sanders said “I don’t think that it is, and I don’t think that was – certainly not the president’s intent,” according to a transcript of the briefing. She said reporters should focus on Warren’s heritage claims, and cited the president’s “extreme amount of value and respect” for the Code Talkers, which is why they were invited to the White House.

The president had nothing but praise for the veterans at Monday’s event, three of the 13 surviving Navajo Code Talkers from World War II. All three saw action in the Pacific and Trump called them “incredible” and “amazing.”

“Thank you so much for being here. You’re very special people,” Trump said. “And without you, maybe the results would have been a lot different.”

“America, we know, is composed of diverse community. We have different languages, different skills, different talents, and different religion,” MacDonald said. “But when our way of life is threatened, like the freedom and liberty that we all cherish, we come together as one.”

Trump, with giving specifics, said “we will help you.”

“So they’re working on building a Navajo Code Talkers Museum. And we will help you, OK?” the president said. “We have some pretty good strength. We will help you, and you deserve it.”