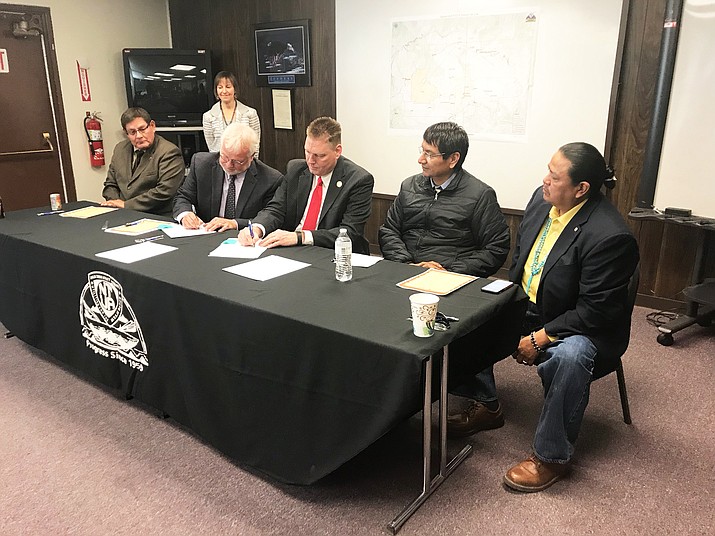 Delegates of the Navajo Nation congratulate officials with the Navjo Tribal Utility Authority after the transfer of ow. Submitted photo

FORT DEFIANCE, Ariz. — Leaders of the Navajo Nation congratulated officials with the Navajo Tribal Utility Authority (NTUA) during a signing ceremony held at the NTUA headquarters Nov. 27, to mark the official transfer of ownership of a large portion of the Southern Trails Pipeline.

Bates thanked NTUA officials and the board for pursuing the opportunity to acquire the pipeline, which he said fits in with the priorities that were established when the Navajo Nation Council took office in January 2015.

“On behalf of the Council, I thank all of the officials involved in the negotiations. It is important that our enterprises continue to pursue opportunities that further diversify our energy portfolio and this acquisition fits in with that vision,” Bates said.

Shepherd, who also serves on the NTUA board and as the chair of the Resources and Development Committee that oversees the Nation’s enterprises, said the process of acquiring the pipeline was always about helping Navajo people and families that rely on the resource to heat their homes and other necessities.

“I thank NTUA and their board for this great accomplishment. My role was to help move things through the bureaucratic process,” he said, adding that acquiring the pipeline helps strengthen the Nation’s infrastructure, which is also a top priority for the Resources and Development Committee.

“If this system shut down, so would the gas service to our communities. We could not let that happen so we sat down with Dominion Energy to see what options we had to continue providing gas service,” said NTUA general manager Walter Haase.

In 2016, negotiations began between NTUA and Dominion Energy. The acquisition of the pipeline also allows NTUA to expand its gas services to other Navajo communities located along the pipeline which runs east from Blanco Hub in northwest New Mexico west to Cameron, Arizona.

“We’re delighted that as a result of today’s agreement the Navajo Nation communities served by the NTUA will continue to benefit from safe and reliable natural gas service,” said Diane Leopold, CEO of Dominion Energy’s Gas Infrastructure Group.  “Today’s signing is an example of what can happen when two organizations work collaboratively to find common ground and achieve a solution that supports customers.”

The transfer is subject to regulatory approval, which is expected to be received in 2018.  For a period of one year following regulatory approval of the transaction, Dominion Energy will provide NTUA various services to facilitate NTUA’s operation of the acquired pipeline assets and integration into the NTUA distribution system, including helping to contribute to NTUA’s costs in complying with federal pipeline safety regulations.