How Trump’s Pocahontas remark can be offensive 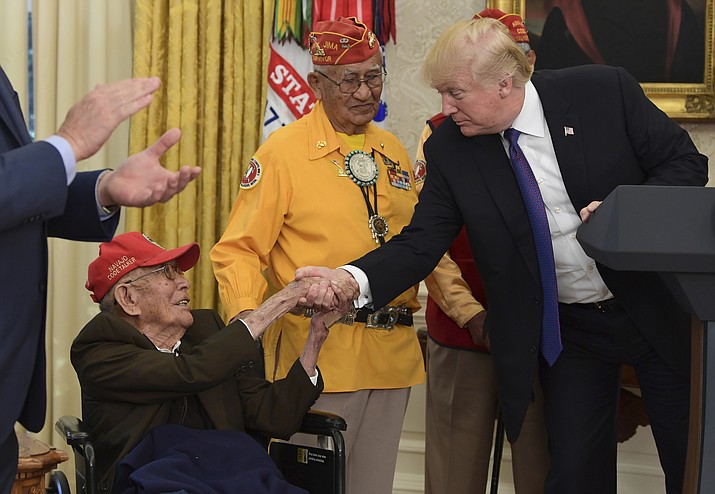 FLAGSTAFF, Ariz. (AP) — Members of Virginia tribes that count Pocahontas among their ancestors said Tuesday that President Donald Trump should not use her name for political gain.

The historical figure is well-known through a Disney movie and Halloween costumes but less so for her sacrifices to protect her people from British forces, historians say.

The White House invited Navajo war veterans to Washington, D.C., on Monday to honor them for using a code based on their native language in World War II that the Japanese could not crack.

But the story became less about the Navajo Code Talkers and more about Pocahontas when Trump said, “We have a representative in Congress who they say was here a long time ago. They call her Pocahontas,” referring to U.S. Sen. Elizabeth Warren of Massachusetts in a bid to mock her claims about being part Native American.

Anne Richardson, chief of the Rappahannock Tribe in Virginia, said Trump showed he knows little about the role Pocahontas played in establishing the United States and disrespected Pocahontas and the Code Talkers in taking aim at Warren.

“He shouldn’t use us to make his point about her,” Richardson said. “Haven’t we been used enough?”

Here’s a look at Pocahontas and how people viewed the remark:

Pocahontas is universally known as the main character in the 1995 Disney movie of the same name, characterized as a young girl who fell in love with an Englishman despite her father’s disapproval. Unlike other Disney princesses, Pocahontas was a real person who lived in present-day Virginia in the 1600s.

Rutgers University historian Camilla Townsend said Pocahontas wasn’t a sexualized girl who turned her back on her people. Rather, Pocahontas was taken prisoner and agreed to marry colonist John Rolfe, not John Smith, in a diplomatic move to save her people from invading forces, Townsend said.

“All the existing evidence unites to show she did it because her father wanted her to,” Townsend said. “They needed the peace.”

Pocahontas was baptized as a Christian shortly after marriage and died in her late teens in England. The country marked the 400th anniversary of her death this year with festivals, exhibits and lectures.

Pocahontas as a racial slur?

Warren, whom Trump referred to as “Pocahontas” repeatedly during the 2016 presidential campaign, called his remark Monday a racial slur. White House spokeswoman Sarah Huckabee Sanders said it wasn’t and that the president didn’t intend it as one.

While the name Pocahontas itself isn’t considered a racial slur, some say it turned into one because of the way Trump used it.

“When the president uses the name of Pocahontas as a pejorative with the intent to insult, it becomes a racial slur,” the Native American Journalists Association said.

Jacqueline Pata, executive director of the National Congress of American Indians, says she would not characterize it as a racial slur but that it was used inappropriately.

“When I hear people use it in a manner that’s not respectful of who she was as a person, that’s a different story,” she said.

The three Navajo Code Talkers at the White House event didn’t visibly react to Trump’s comment. But families of other Code Talkers say it was disrespectful to the men.

Robert Gray is the chief of the Pamunkey Tribe, a community that once included Pocahontas. The tribe is Virginia’s only federally recognized tribe with 200 members, a designation it received last year.

Gray said Tuesday that Trump’s comment was inappropriate and that he was hopeful people would seek out valid sources of information on Pocahontas.

“We don’t have the time or the resources to get involved every time President Trump uses nicknames for various people,” he said.

Kent Adams, chief emeritus of the neighboring Upper Mattaponi Indian Tribe, says Pocahontas is an icon of American Indian people and Trump should not use her name in a disparaging way or for political gain.

“He should leave her out of it,” Adams said. “She should not be included in this conversation.”