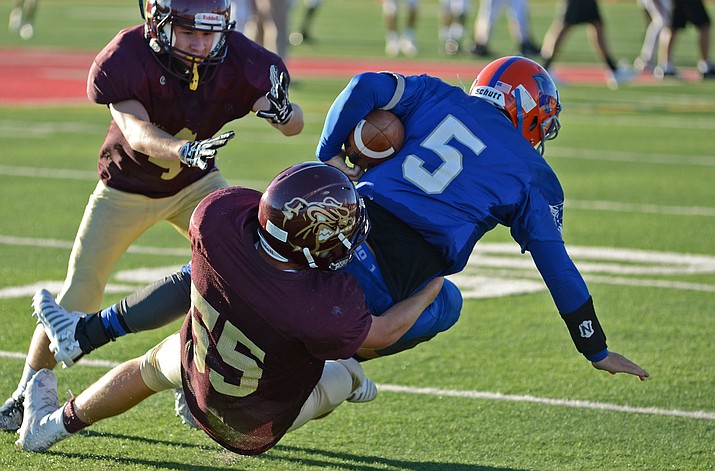 Winslow, Central (Phoenix), Mingus and Chino Valley get ready for football season by practicing against each other at Mingus High School in Cottonwood, Arizona. Winslow Bulldog defense on the move. Photo/Todd Roth 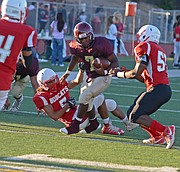 Winslow offense takes the ball up the field. Photos/Todd Roth

WINSLOW, Ariz. — The Winslow Bulldogs defeated the Monument Valley Mustangs 35-6 in their opening game in Winslow Aug. 25 with the Bulldog defense completely controlling the Mustangs in a sloppy game with many turnovers and penalties.

The Mustangs and Bulldogs split a pair of games last year, with the Mustangs nipping the Bulldogs 24-23 in the season opener at Kayenta on their way to a superb 10-0 regular season only to lose to the Bulldogs 40-6 in a first round playoff game. Last year, Winslow finished its season 12-5, losing to Sabino 48-0 in the next playoff game.

In the season opener, Monument Valley recovered a Winslow fumble on the opening kickoff and the Mustangs got a first down but then lost yardage and were forced to punt.

Winslow hit a long pass from Junior Villanueva to Yoann Djassa to the Monument Valley 10-yard line. The Bulldogs lost a fumble but got one back when the Mustangs fumbled in a game filled with early mistakes.

A fourth down pass to Djassa got the Bulldogs to a shadow of the Monument Valley goal and Damon Avalar scored on a one-yard run. A two-point conversion pass to Jason Lyons gave the Bulldogs an 8-0 lead, with the first quarter more than half over. Winslow scored on a 30-yard pass from Villanueva to Darrien “Peanut” Brown. The pair combined for a two-point conversion pass on the last play of the first quarter, which ended with Winslow leading 16-0.

Monument Valley drove to near the Bulldog 30-yard line, where they lost a fumble but once again Winslow lost a fumble on the next play. The Mustangs could not move the ball and turned it over to Winslow on downs.

Winslow moved the ball quickly with a long pass to Djassa and a series of running plays. Brown ran into the end zone but that score was negated by a holding penalty. Winslow got a first down on a penalty on a fourth down play and Brown scored on a two-yard run. The conversion pass failed and the Bulldogs led 22-0 with two minutes left in the half.

One of Monument Valley’ best plays of the half, a 40-yard run by quarterback Jonah Hale, was negated by a penalty with just seconds left in the half. The half ended with Winslow leading 22-0.

Winslow recovered another Mustang fumble to end their first drive of the second half. The Bulldogs moved in a threatening position and scored on an 11-yard run by quarterback Villanueva on a fourth down play. Avalar booted the conversion for a 29-0 Winslow lead.

Monument Valley could not move the ball, but after their punt they recovered another Winslow fumble. As had happened before, the Mustangs fumbled the ball back to the Bulldogs on the next play. The third quarter ended with Winslow leading 29-0.

Noah Upchurch scored for Winslow on a five-yard run and the conversion run failed and Winslow led 35-0 with most of the fourth quarter left to play.

The Mustangs scored on a 38-yard pass from Stanford Staley to Stan John with just 13 seconds remaining to play. The conversion failed and the game ended on the next play with Winslow winning 35-6.

The Bulldogs will have their Homecoming game Sept. 1 at Emil Nasser Stadium against the Page Sand Devils. That game will start at 6 p.m. because of homecoming ceremonies. Page beat the Blue Ridge Yellowjackets 40-6 in their season opener and met Coconino Aug. 25.

Monument Valley will stay on the road and play the Holbrook Roadrunners Sept. 1. The Roadrunners opened their season Aug. 26 in Flagstaff against Wickenburg in the Kickoff Classic.