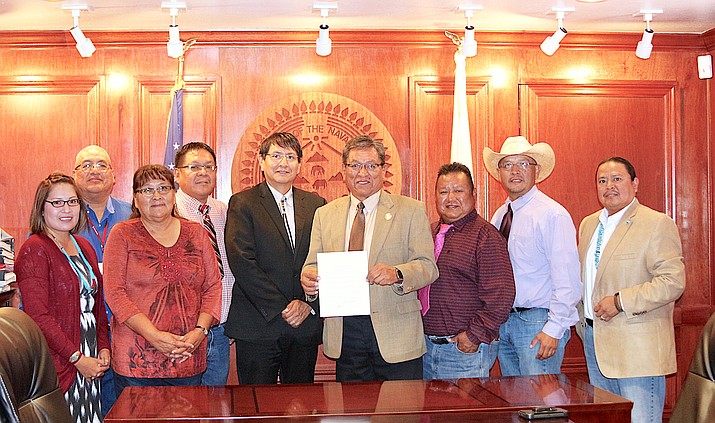 Shepherd and GUSD bus drivers and staff met with Begaye and Nez to discuss the importance of school bus safety throughout the Navajo Nation.

Shepherd, who also serves as the Apache County Supervisor for Dist. 2, stated that the GUSD bus drivers have consistently coordinated school bus safety initiatives and community outreach, and encouraged other school districts to implement a similar safety initiative and to report problematic areas to their school boards.

“I want to thank President Begaye and Vice President Nez for supporting this issue and taking the time to declare this proclamation. When we proclaim a month for school bus safety, I think that gives other school boards across the Navajo Nation a chance to interact with their local communities, and Ganado has been doing that for several years now,” Shepherd said.

He added that he would also establish a similar proclamation for Apache County, as well as advocate to improve road infrastructure such as widening, paving, and maintaining roads to allow school buses to pick up students and avoid road and traffic issues due to inclement weather.

“[Bus driver] Jackson Curtis, you hear him on the radio telling people to slow down around the bus stop areas. We want to take that to the next level. I am very proud of all the bus drivers that are here and how they continue to keep Navajo students safe when traveling to and from school,” he said.

Begaye thanked the bus drivers for their efforts and said the Navajo Nation will do more to promote bus safety during the month of October.

“Parents place their kids in the hands of the bus drivers, to make sure that they get picked up safely, delivered to the school safely, and then returned home. So I know, as a parent, I would really say ‘let’s praise the bus drivers’ because they are one of the most important employees at the school. The students’ lives are in their hands,” Begaye said.