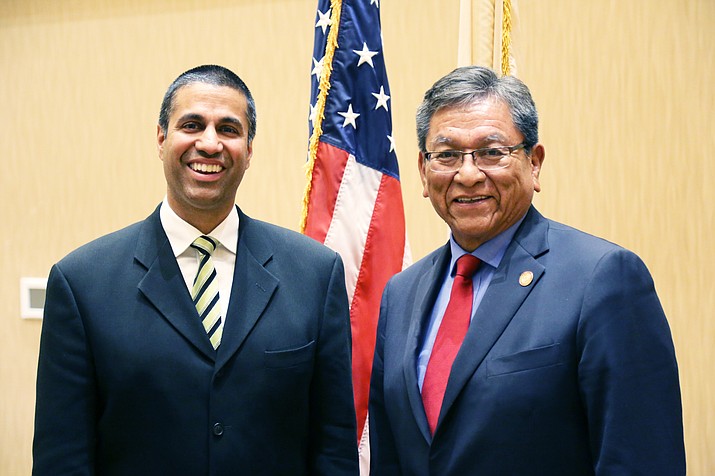 TWIN ARROWS, Ariz. — On Aug. 22, Navajo Nation President Russell Begaye and tribal leaders consulted with the Federal Communications Commission (FCC) on how to close the digital divide between those with access to modern information and communication technologies and those without.

“The Navajo have vast regions without fast and reliable wireless coverage,” Begaye said. “We are on the wrong side of the digital divide. This needs to be addressed in a way that maintains the integrity of our Nation.”

Vice President Jonathan Nez thanked the FCC for coming to the Navajo Nation and said he hopes the Nation and the FCC can work together to bring these services to the people.

“Increasingly, access to wireless coverage is necessary to be successful in the world, especially for our young people,” Nez said.

In order to develop wireless infrastructure, coverage maps are required to determine areas with subpar coverage and to plan for the construction of new cell towers. However, the president is concerned that cell phone carriers, such as Verizon and AT&T, create maps that do not take into account the diversity of the local terrain, thereby overstating their coverage.

“The geography of the Navajo Nation is unique and includes desert flatlands, mountains, mesas, arroyos, canyons, and valleys,” Begaye said. “The harsh topography must be considered to determine the accuracy of coverage data.”

FCC Chairman Ajit Pai said the digital divide is one of the biggest issues facing the commission and responded to these concerns with information about the Mobility Fund Phase II challenge process, in which tribes can contest data provided by the cell phone carriers.

Begaye criticized the challenge process because many underserved areas, including the Navajo Nation, do not have the technical or personnel capabilities to conduct the tests required by the commission to challenge carrier data.

If the commission assists the Navajo Nation with the challenge process it will take an important step to accurately assess coverage. The accuracy of coverage is vital in emergencies considering the obligations of FirstNet to provide reliable coverage for first responders and to develop AMBER Alert on the Navajo Nation.

Mobility Fund Phase II, which was discussed in detail during the tribal consultation, will provide underserved areas with $4.53 billion over a 10-year period to develop 4G LTE coverage for all areas of the United States.

The fund has reserved $34 million for eligible tribal lands to build cell towers. This money is designed to address concerns with the reverse-auction process that benefits areas that require less funding at the expense of many Native American communities that lack infrastructure and thus require more funding. However, it is uncertain whether the $34 million will be enough to assist all underserved tribal communities, many of whom are among the poorest in the country.

Begaye voiced concerns about the Lifeline Program, which provides support for low-income customers to receive discounts for phone services. The program is scheduled to eliminate voice-only services by 2020. This will make it difficult for elders using Lifeline who rely on flip phones and are unable to use smartphones.

“Many of our older Navajos aren’t interested in smartphones and they just want a simple phone to make important calls,” Begaye said. “What happens to them if they need to make an emergency call?”

In addition, Lifeline’s annual recertification process uses third party callers who do not understand Diné Bizaad or the culture. The result is many Navajo subscribers are removed from the network without due diligence.

The commission is examining regulatory requirements that may slow the development of wireless network infrastructure and questioned Section 106 of the National Historic Preservation Act (NHPA), which requires federal agencies to go through a tribal review process to protect tribal properties.

The commission asked how to best go about removing barriers to wireless infrastructure while preserving each tribal nation’s opportunity to participate and inquired about the importance of tribal fees, exclusion for review of sites that have already gone through the process, batching of proposals and more.

At the consultation, it was brought up by tribal leadership that while State Historic Preservation Offices are funded to implement their review process, tribes are not funded. Therefore, in order to implement a review process, many tribes establish a fee to cover their costs. In addition, a build once policy to streamline the process was discussed.

Begaye listened to the concerns brought up by the FCC and said that he maintains support for Section 106 because it protects the land and culture by allowing the Nation to identify locations where cell towers should not be built.

He also brought up concerns with Twilight Towers, which are cell towers built from 2001 to 2005 without tribal consultation. He told the commission that the Navajo Nation does not know where these are and, in order begin to right this wrong, information about their location is required.

“I’m deeply grateful to President Begaye, the Navajo Nation and all the tribal leaders who attended.” Pai said. “I’m excited about the opportunity that the FCC has to work with tribal nations to ensure that everybody, everywhere can get the connectivity they need to get better health care, educate their kids, to get jobs and to otherwise improve the lives of tribal members going forward.”