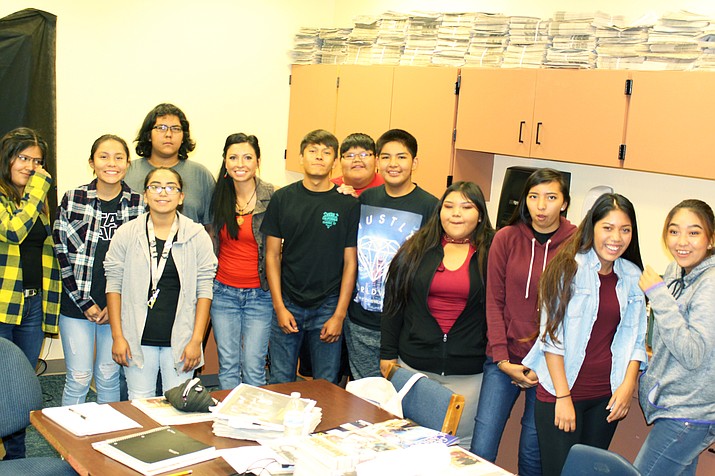 “I love hearing about you,” she told the journalism students.

Yerian began working at NHO about four years ago as a freelance writer and became a reporter before stepping up to the editor’s post.

Yerian knew she wanted to become a writer since she was nine years old. She majored in journalism at College of the Ozarks in Missouri. She also interned at a radio station in Springfield, Missouri, before earning her degree in print journalism with a minor in history.

Yerian said NHO has an archive with all NHO papers printed from past years.

“This is so you can see where you were in the past and where you’re going,” she said.

Yerian also worked for a radio station in Grand Junction. She has traveled extensively with treks to Costa Rica and Alaska among her favorites.

She was working at a Farmer’s Market in Flagstaff when she spoke with then NHO Editor Ryan Williams and became a freelance reporter for NHO. Her first story was covering a reggae concert on the Hopi reservation. When the job opened for reporter, she jumped at the chance. Last year, she became managing editor and in May she became editor.

Yerian emphasized to the students that in journalism deadlines are important, although sometimes they have to wait to run a story if they don’t have all the information needed.

Yerian said reporters are out in the community, while editors spend much of the time in the office designing the newspaper and editing stories.

As editor, Yerian said she is concerned about fairness and accuracy. She has two recorders with her when interviewing in case one doesn’t work. She also takes notes to back up the recorders. She reviews her reporters stories for accuracy and timeliness.

Yerian said if students hear a quote when interviewing they should write down the time on the recorder so they know where to play it back.

“Accuracy is important. You have to pay attention to what is being said,” she said.

Yerian said she makes the recorders obvious so the people she’s interviewing know they are being recorded.

She also carries two cameras: Her personal camera and the camera NHO provides for her.

She said journalism is fun because of the people they meet and said the perks are good because journalists get into some events and get to talk to a wide variety of interesting people.

“Most people like to be in the newspaper,” she said about interviewing people.

Yerian said journalism is not just about hard news because there are also stories about education, sports, lifestyles and music just to name a few.

Yerian rebuffed the notion that journalism is dying.

“People still like to pick up the newspaper,” she said.

Yerian said there is a difference between professional journalists and those who like to write blogs.

“Make sure you’re accurate, but have fun with it,” she said.

Yerian said journalists don’t go into the career because of money. She said the pay is low except for in large markets.

She encouraged students to apply to NHO for jobs when there are openings.

“We want a Native who understands Native issues,” she said.

Born in Gallup, New Mexico, Yerian was raised in Flagstaff. She is half Navajo and half white.

“You do it for yourself and the community,” she said about being a journalist.