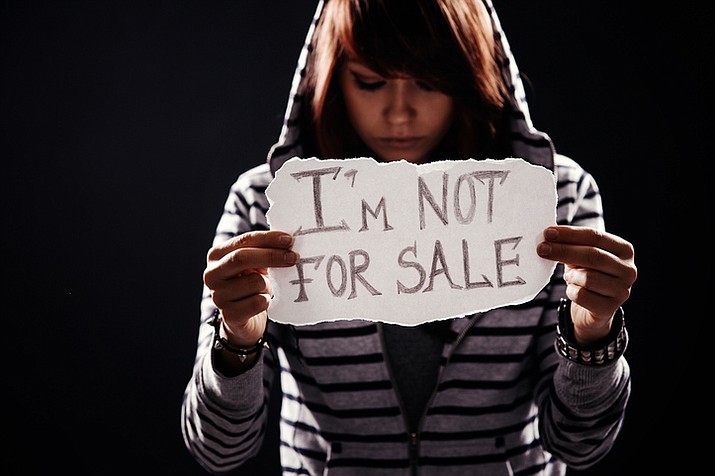 Passage of the Navajo law came as Sen. Tom Udall, a New Mexico Democrat, hosted a listening session on trafficking in Indian country.

Council Delegate Nathaniel Brown (Chilchinbeto, Dennehotso, Kayenta) serving on the Health, Education, and Human Services Committee and the Naabik’íyáti’ Sexual Assault Prevention Subcommittee, met with representatives from the Casey Family Programs and the University of Colorado Boulder to discuss a proposed plan to evaluate sex trafficking on the Navajo Nation and ultimately develop a plan to combat the problem July 13.

Navajo President Russell Begaye on August 7 signed the Navajo Nation Law against Human Trafficking, signaling his commitment to take a stance against an international crime that targets some of the world’s most vulnerable populations. The law, which amends the tribe’s criminal code, also calls for cooperation among government and civil institutions to define, prevent and combat the illegal “transporting, trading or dealing” of people.

“This is about strengthening our laws and collaborating with county, state and federal officials to stop the trafficking of our people,” Begaye said in a phone interview. “We are starting to see more missing children and teens, especially on the major corridors. We need to put families on alert so they know the issues, and we need to make sure all our people are protected.”

The Navajo Nation Council on July 19 unanimously approved the law, which defines trafficking as “the illegal recruitment, transportation, transfer, harboring or receipt of a person, especially one from another country, with the intent to hold the person captive or exploit the person for labor, services or body parts.” Such offenses include forcing people into prostitution or marriage, slavery, sweat-shop labor or the harvesting of organs.

The Navajo Nation condemns these actions, which constitute “a serious offense and a violation of human rights,” the law states. Yet trafficking — especially on or around Indian reservations—remains largely invisible, said Council Delegate Nathaniel Brown, who sponsored the legislation in March.

“Two years ago, I didn’t think we really had a problem,” Brown told ICMN. “But then I started looking into it. When you really see this, you can’t un-see it. I have a permanent lump in my throat.”

Brown attended training sessions with leaders of other Arizona tribes, along with the Arizona Human Trafficking Council. He learned that trafficking is a problem on tribal land — but because federal agencies are not required to report ethnicity of victims, it is unknown just how widespread it is.

On a global scale, human trafficking is the third most profitable crime, after drugs and arms dealing, the United Nations reported in 2014. More than 2.5 million people worldwide have fallen victim to the crime, which is considered a $36 billion industry.

Indigenous people are especially vulnerable, Brown said. Traffickers target runaways or children from broken homes. They use social media or online advertising to lure children or teens to metro areas where they are often forced into prostitution.

“The breeding ground for trafficking is poverty, alcohol, drugs and gambling,” Brown said. “On the Navajo Nation, we have all of these.”

Brown said the reality of trafficking is “sickening.” As opposed to drug or gun dealing, sex can be sold “over and over again,” with victims having an average of 12 sexual partners per day, he said.

“Pimps can make their money over and over again with trafficking,” Brown said. “People who are trafficked become empty shells. They have no hope. They have hit bottom and they don’t trust anyone at all: not the police or the laws or the system.”

The new law acknowledges the jurisdictional limitations on tribal land and calls on the Navajo Nation to cooperate “bilaterally and multilaterally” with other organizations to suppress the crime. It also seeks coordination with think tanks to analyze trafficking on the reservation and take measures to curb it — including advocacy, education, counseling and training to prevent trafficking and protect victims.

The first step to combat trafficking is awareness, said Council Delegate Amber Crotty, who serves as chairwoman of the Sexual Assault Prevention Subcommittee. She wants to see immediate efforts to raise awareness and educate the public.

“We know we have major corridors where there is national traffic coming through the reservation,” she said. “We know these corridors are prime gateways for traffickers to come in and prey on the vulnerable. We also know they’re using social media or other means to promise work, movie careers, things like that to lure people in. This is happening in Indian country. As we learn more about it, people can be educated on it. We can prevent individuals from being trafficked into the sex trade.”

The new law is the first on the Navajo Nation to address human trafficking, Crotty said. It adds a specific, sex-related crime to the criminal code and allows law enforcement officers to make arrests. A human trafficking conviction will carry a fine and a minimal prison sentence.

Passage of the Navajo law came as Sen. Tom Udall, a New Mexico Democrat, hosted a listening session on trafficking in Indian country. During the July 26 hearing, held in Washington, Udall called on the federal government to do more to keep Indian country safe.

Udall also called for improved data collection on human trafficking on tribal lands. He asked the Government Accountability Office to research the prevalence of trafficking in Native communities, the frequency with which law enforcement agencies encounter it, victims’ services and efforts to increase prosecution.

“Like with other crimes in Indian country, addressing human trafficking will require Congress to look at and pass legislation that addresses issues of jurisdiction and inter-agency cooperation,” he said. “I’m hopeful that we can work together to provide tribes with more resources to combat human trafficking and ensure that all Native victims of crime get the support they so desperately need.”