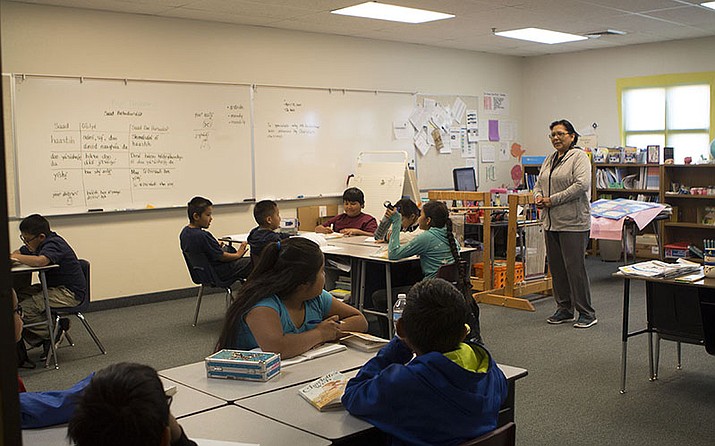 Gwendolyn Begaye, a fourth-grade teacher at Diné Bi’ Olta’ school, discusses the book “Charlotte’s Web” with her class. Instructors at the school are encouraged to speak Navajo to students in every subject every day.

WASHINGTON — Families in more than half of Native American homes in Arizona now speak only English at home, according to new numbers from the U.S. Census Bureau.

American Community Survey data covering 2011-2015 showed that 53 percent of people who identified as American Indian in the state said they speak only English at home, up from 49 percent in the previous five-year survey.

The increase comes despite efforts by tribes to keep their cultures and their languages alive through immersion schools and tribal programs. But people involved in those programs said were not surprised by the numbers, which follow generations of government antagonism toward native culture and language.

“We see students that come in with little or no language skills. So that obviously tells us that there is little or no Navajo spoken in the home,” said Audra Platero, principal of Tsehootsooi Diné Bi’ Olta’, a language-immersion school in Fort Defiance.

Navajo Schools Superintendent Tommy Lewis said while some believe the language should be taught at home, schools have little choice.

“The problem is that our parents are young, many of them are young, they themselves don’t know the language,” Lewis said. “It seems that schools are beginning to be the only outlet through which we can assist and revitalize the language.”

Lewis said if something doesn’t change, “we can lose it (the language) in 25 years and that’s a real concern.” He blames “the media, through music, through many other things that I think has affected our children from not learning Navajo as their primary language.”

“This goes back to many years of failures though federal policy, where the intent of the federal government was to colonize us, to get us away from our language and culture so that we can be a part of the melting pot and they’ve done that through many avenues: through funding, through policy, through programs and so forth,” Lewis said.

Anthony Gray, a culture coordinator for the Gila River Indian Community Tribal Education Department, agreed that many of the problems can be blamed on what he calls the “boarding school effect.”

“The boarding schools were founded, basically, to assimilate Native Americans,” Gray said. “We see a lot of cultural loss, we see a lot of pictures of young children with their hair cut, dressed in full clothing and just everything about their tribal culture is basically erased and taken off of them.”

That push by the government led, in turn, to Native American parents who “didn’t want to teach their children the Navajo language because of what they experienced,” Platero said.

Gray points to a 19th-century quote, “Kill the Indian, save the man,” that he said was a “reference to the mentality that the American, white society was more important than the tribal society.”

Platero said there is, “This whole idea that English is better, the whole concept of ‘Western education provides more opportunities.’”

For many, it did. And still does. Gray said in an effort to help communities advance, many tribes will send members off the reservation to live, work and learn in metropolitan areas.

“The idea was for them to learn the trades of modern industry… and come back and try to implement them here,” he said.

Gray said in the Gila River community that since the 1970s there has been a “resurgence to revitalize the language or to re-maintain the language.”

That desire for the culture is also seen in parents who were denied the language when they were children.

“As a people, we are aware that there is a language shift,” Platero said of the Navajo. “We understand that measures need to be taken, for there is a state of urgency when it comes to the Navajo language and culture.”

Lewis agreed, saying, “Schools can only do so much … it is a tribal problem.”

“If a child is exposed to their language and culture and their identity early on, they have a stronger perseverance in dealing with life situations, they know who they are, they have confidence in themselves,” Lewis said. “If you take that away, the child is vulnerable.”

Lewis lamented that as native languages are lost, the culture can no longer be passed on to future generations.

“We don’t want to be faced with that situation. We want to say that we can still be Diné, we can still speak the language, we still know who we are 100 years from now,” he said.