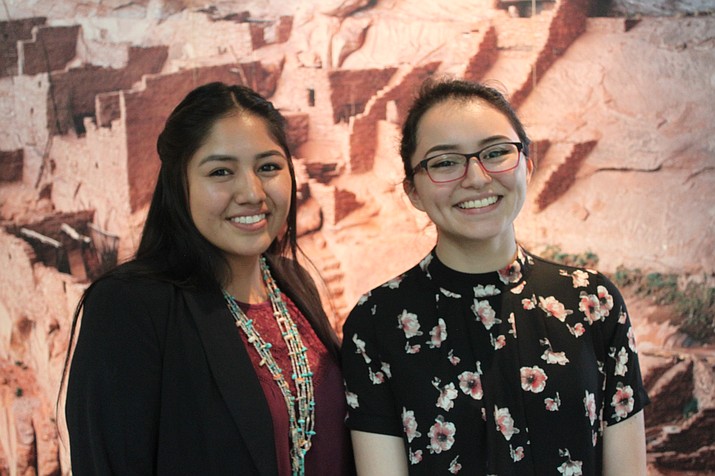 Zuch is a registered Navajo and part Tewa/Hopi, but not enough to be registered. She graduated from Flagstaff High School where she painted large eagle soldiers for the school when she was a freshman. She joined and competed in Quiz Bowl from her sophomore year to her senior year. Zuch played in the marching band’s drum line her junior and senior year. Her senior capstone project was on bee pollination with local fauna.

“I wanted to do my best at Flagstaff High School,” Zuch said. “And, I’m proud to say that I graduated with a 4.24 GPA as one of the top five in my class.”

Zuch was born and raised in Flagstaff. Her mother is a teacher who has taught on the reservation for a couple years now. Zuch said there was a time she lived on the reservation in Tuba City for about a year and a half and went to Moencopi Day School.

Zuch said her father had some roots in D.C. Reconnecting with family in Virginia was one reason to go there, but another reason was Georgetown’s programs and location, which was closer to political events, history and influence.

“I thought this was a great opportunity or a chance to get more politically involved,” Zuch said. “I was drawn to that. I thought it was a perfect way to speak my mind.”

She is majoring in human science — a human biology major, a lot of anatomy and physiology. She is currently pre-med and part of the Nursing and Health Studies School at Georgetown.

“I definitely want to go into the medical field when I graduate,” Zuch said.

While the future is a ways off, Zuch said she would like to take a year or two off after she graduates from college and come back to Flagstaff to volunteer and work with the Flagstaff Medical Center to get more experience. Eventually, her main goal, though, is to be a cardiovascular surgeon.

“That’s going to take a really long time and I might change my mind, but, today, that is my goal,” Zuch said.

Her advice to students still in high school is to make sure to talk to the high school counselors because it is their job to help students make the transition from high school to college or university.

She also suggests getting to know the counselors by going to their office often — and then researching schools to see which fit into a students’ interest and which have a list of scholarships students can apply for.

“Really getting to know them, really getting to talk to them, you can really figure out a lot about yourself by just talking to your counselor,” Zuch said. “Once the two of you are really able to flesh that out … that’s when you really get to harvest what kind of specialties you’d like, what your actual talents are and generally what your interests are.”

Zuch acknowledges that moving from Flagstaff to Georgetown in Washington D.C. initially was a little depressing because back home she had an instant connection with any Native person she met.

“We had similar struggles, similar identities, history,” she said. “It was just something you can automatically relate to.”

She said coming to the east coast, she encountered people who asked her if she had electricity, if she had running water and if she lived in a teepee.

“It’s a little discouraging to have this blanket of misunderstanding about something you were so comfortable with only to have people get it wrong right in front of your face,” Zuch said. “That’s not necessarily their fault.”

To address some of the lack of understanding, Zuch has been talking to her dean about starting a Native American Heritage club on campus. While other groups are represented with clubs, Zuch said there are maybe two clubs that are related to Native American heritage.

“What I’d really like to do is enlighten other students not just about the cultural aspects of the Navajo and Hopi, but just in general about the struggle all Native Americans have faced throughout this country’s history,” she said. “The reservations, the boarding schools, the genocide. I feel like a lot of that is washed away with other movements. By starting a club, at least it’s a start to telling people about a group of people, Native Americans, who I think get neglected a lot of the time.”

Zuch, who will be a sophomore in the fall, said she tries to preserve some sense of cultural identity while there — saying her morning prayers and running before the sun comes up. But personally, she tries to bring up her identity to people.

“I say, ‘hey, I’m Native American and this is something I’m really passionate about and I’d like to tell you more,’” Zuch said. “If they are open, that’s great … I’ll go into the history. I have a few friends who are majoring in linguistics, so I’ll talk to them about the language, Navajo and Hopi. A lot of people are interested in the art and the culture, and it takes off naturally.”

She also said it helps that a lot of the students who attend Georgetown are bright and open to new things, so she takes advantage of that and tries to enlighten them to a group of people with cultures that are dying out.

“I’d like to preserve some amount of that, at least with my peers,” Zuch said. “I see it paying off because some of my friends will see a snippet of a news article that talks about some of the things I have talked about and they will say, ‘hey, I remember you talking about it.’ It’s really nice to see the things I have told them have stuck with them enough for them to recognize it.”

The first step, along with wanting to start a club, is talking to people, she said.

“Talking to people about culture and language and the traditions that follow everything,” Zuch said.