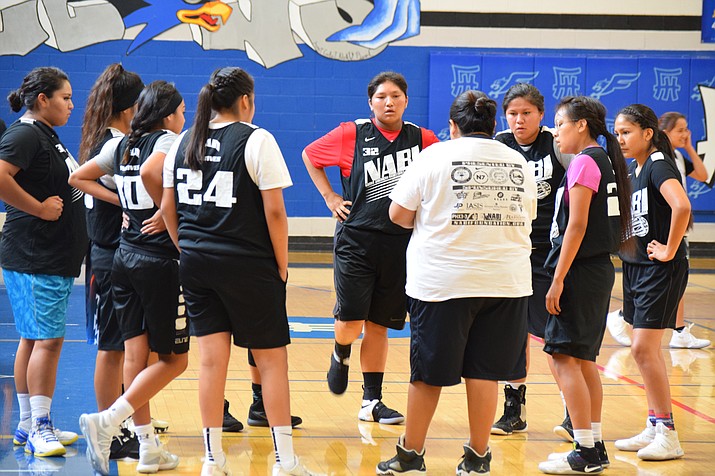 SCOTTSDALE — To appreciate the spirit of the Lori Piestewa National Native American Games is to understand what occurs beyond the competition.

Last year, when an accomplished club basketball team from Scottsdale prepared to face a group from Chinle, a community in northeastern Arizona that is the heart of the Navajo Nation, it noticed its opponent had no equipment, no jerseys and no basketballs.

“They had to take magic marker and write numbers on the back of their shirts,” said Gary Nees, senior director of events and operations for the Arizona Sports and Entertainment Commission.

When the group from Scottsdale saw this, they went to the opposite end of the court and shared their basketballs with them.

That random act of kindness is typical of the games that honor the late Lori Piestewa, the U.S. Army soldier killed during the Iraq War. This is the 16th year of the event that brings together basketball teams from all over the state. The three-day tournament was recently held at sites around the Valley. The idea started when Nees and his staff were searching for a new event to put together. They wanted something that fit their mission to reach out to a new demographic.

“Our executive director at the time, Erik Widmark, thought, ‘Who knows, maybe we can do something to honor her, not so much from the game standpoint but from a personal standpoint,’” Nees said.

From there, Widmark met with Piestawa’s family and learned many of them were athletes. Her cousins, nephews, brothers and sisters all played sports, and Lori was a three-sport athlete in track, basketball and softball. The tournament was formed and began its games in Flagstaff with venues in surrounding cities like Page and Winslow.

“At that time we were wondering if this was going to work or not because you just never know when you launch an event with a demographic we hadn’t worked with before,” Nees said. “But we were steadfast in our passion because of who Lori Piestewa was so we were going to ride it out no matter what happened.”

Things were not easy at the beginning because of the distance of venues and the challenge of spreading the word. The first year of the games featured 65 athletes. It didn’t take long before the attendance and participation would skyrocket.

One of the reasons the tournament has continued to grow is because of the passion behind the cause and how the athletes view it as a time to play with the best.

Percy Piestewa, Lori’s mother, said this tournament represents everything that Lori did.

“We all have a purpose in life I’m sure, but sometimes some of us never figure out what that purpose is,” she said. “But we figured that her purpose in life was to bring everybody together in peace and unity.”

Percy said that Lori was always a good athlete, but she never wanted to be recognized for her accomplishments. Lori would go as far as scratching out her photos in the yearbooks and standing in the back of photos to make sure that she wasn’t in the spotlight.

“It was just her nature. She just wanted to be a part of the team and not anything special,” Piestewa said.

She believes that events like this are important for youth. After spending 40 years in the educational system, she saw many kids having to deal with the idea that they wouldn’t be able to succeed, whether it was because of their background or their heritage, but the National Games gives them an opportunity and the encouragement to move forward in a positive way.

Along with the encouragement that is seen throughout the tournament, the games also often show compassion and kindness.

“It’s brought the whole world together, she said. “We’ve met so many people from all over the world and there are so many caring people and so many different ethnic backgrounds that care and love and we need to remember that there’s a lot of love in the world.”

Justin Peterson, the commissioner of the tournament, believes the importance of the event is that it allows for the legacy of Lori to live on.

“I think the biggest thing is that it brings all of the communities together and gives these kids the opportunity to compete against other teams in the region,” Peterson said

With the challenges going on in the world, Piestewa says that this event continues to reach out to young men and women in a positive way. While the void of Lori is always there, Piestewa said that the amount of support they have received is a blessing.

“Some days are good, some days are bad, some days are more tolerable than others, but the fact that we have all these people that are willing to be there for us, to support us in so many different ways, with a hug or even just a phone call to say, ‘How are you doing today’ is a godsend,” Piestewa said.

From 65 athletes to 3,300 and thousands of spectators, the Lori Piestewa National Games have come a long way.