Begaye calls for improved healthcare and facilities on Navajo Nation 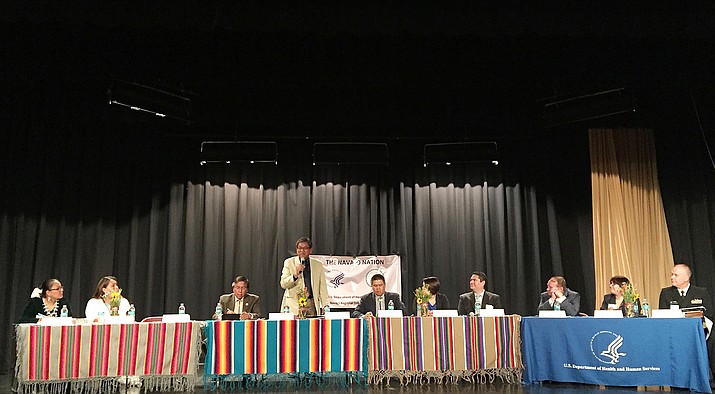 In addressing the VA Reimbursement Agreement between the VA and both IHS and Tribal Health Providers (THP), President Begaye said the Navajo Nation opposes any consolidation of the current MOA into a larger Community Care Program or any standardization of IHS/THP agreement. Submitted photos

WINDOW ROCK, Ariz. — During a consultation held July 18 with representatives from the U.S. Department of Health and Human Services (DHHS), President Russell Begaye called for improved healthcare services and specialized facilities on the Navajo Nation.

The consultation took place at the Navajo Nation Museum in Window Rock, Arizona.

Begaye spoke about the reimbursement agreement between the Veterans Administration (VA) and Indian Health Services (IHS), calling it slow and cumbersome.

During a recent VA round table held at the Heard Museum, Begaye advocated against altering the reimbursement rates between the VA and IHS. He also opposed any standardization of services where the Navajo Nation would be put under a certain region as opposed to having a specific Navajo region.

“In proposing to continue the current VA Reimbursement Agreement with IHS and Tribal Health Providers (THP), the VA shouldn’t consolidate the current memorandum of understanding into a larger Community Care Program or standardize IHS/THP agreements,” Begaye said. “We oppose the standardization of services as we have always had our own Bureau of Indian Affairs and IHS regions.”

Vice President Jonathan Nez mentioned the Navajo Nation supports the reauthorization of the Special Diabetes Prevention Initiative with health and wellness being demonstrated throughout the Navajo Nation.  He said key health care bills are being monitored and the Navajo Nation is working collaboratively with state senators and representatives.

The reauthorization of the Special Diabetes Program for Indians is a major area of concern for the administration, Nez said.

“Our people are giving up on life and we can no longer stand in silence. We have shared our message of hope and the beauty of life with over 50 schools,” Nez said.

The Navajo Nation Wellness Policy is an initiative allows tribal employees up to an hour to exercise.

“Our employees will be able to exercise, which will increase productivity and decrease healthcare costs,” Nez said.

The Dine’ Bich’iiya Summit was another Begaye-Nez initiative aimed at addressing the food system on the Navajo Nation.

“We must exercise our tribal sovereignty to regain control of our food system. Returning to farming and self-sufficiency is the key,” Nez said.

Along those lines, Begaye also advocated for the federal food distribution program to use Navajo Beef products and support tribal businesses/enterprises.

Begaye encouraged the Navajo people to remain active in taking care of their health.

“Historically, our people have always worked outdoors and been able to subsist off the lands they farmed and ranched,” Begaye said. “We need to return to this lifestyle of being active and eating what we farm. The way our ancestors lived made them strong and healthy.”

With larger populations of Navajo spread across all agencies of the Navajo Nation, Begaye said there is a need for federal assistance in developing more health facilities in places like Bodaway Gap and Pueblo Pintado. Begaye said he will continue to advocate that the new Gallup Indian Medical Center (GIMC) be placed on Indian land.

“The Navajo Nation has 80 acres of land adjacent to Miyamura High School in Gallup and we are looking to develop the new GIMC on this acreage,” he said.

At the consultation, representatives from the Navajo Agency IHS noted increases in the final FY2017 budget that was approved by President Donald Trump. The IHS service budget was increased by $6.1 million dollars to help programs partially fund pay raises while minimizing the impact to base budget of providing health care services. There was also an increase of $1.5 million to provide alcohol and drug treatment services.  The third party collection increased by 11.58 percent compared to FY2016.

“NDOH (Navajo Department of Health) is confident that DHHS will present and prescribe Navajo Nation health matters to the Trump administration for conclusive change that is favorable to the Navajo Nation,” said Dr. Glorinda Segay, executive director of the NDOH.

Begaye said they would continue to advocate to Price on behalf of Navajo Nation health care service issues.

“We will make sure that our requests stay in place and are prioritized,” he said.