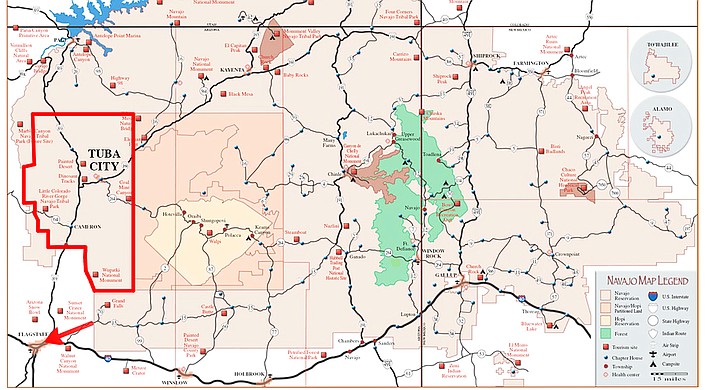 The Bennett Freeze area, highlighted in red, shows the area that was affected by the 1966 freeze on the Navajo Nation. Map from report given to the U.S. General Accounting Office’s Navajo-Hopi Resettlement Program

“This is going to right some of the wrong that’s been imposed on our people in the FBFA,” Begaye said. “Our administration is committed to helping those that live in this area and that’s what we intend to do with the $3 million.”

The money will be used to construct 36 new homes, renovate 45 existing homes and assist with processing 54 home site leases for residents still living within the former boundaries of the Bennett Freeze.

In 1966, Robert Bennett, the commissioner of the Bureau of Indian Affairs issued a hold on development for the roughly 1.6 million acres of land inhabited by Navajo and Hopi people.

Because of that decision, the tribal government and families in the wide area were not permitted by law to work on infrastructure, construct new buildings and renovate homes within Bennett Freeze area.

President Barack Obama lifted the freeze in 2009. Since then, the Navajo Nation has started to take action to rehabilitate those communities that have fallen into disrepair because of federal policy.

Begaye said the agreement will move forward those efforts.

“Unfortunately, the government caused this and they should be responsible for it,” Begaye said. “Since they’re opting not to be responsible, we are using Navajo Nation funds to at least address some of the homelessness, some of the dilapidated structures and help our people move on with their lives.”

The $3 million will be allocated to NHA and eligible recipients will be required to qualify under existing NHA and Housing and Urban Development (HUD) eligibility guidelines.

“In signing this agreement, we are designating the NHLC and NHA as lead agencies who will ensure the funds are spent according to the federal guidelines set forth and that houses are constructed in a timely manner,” Begaye said.