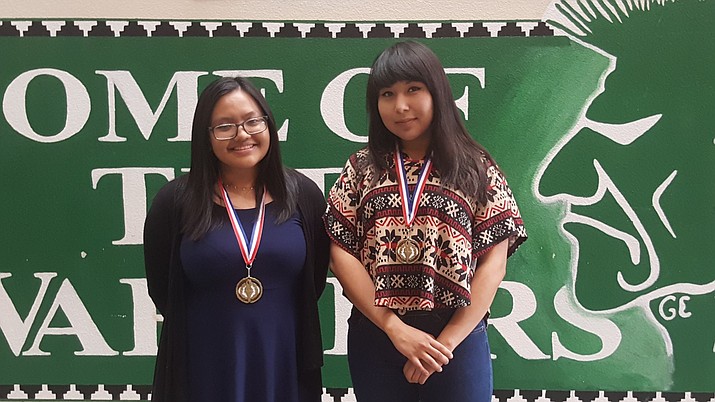 Two of the students are under the direct mentorship of Maria Goatcher, director of the Tuba City High School ‘s dual enrollment program partnership with Coconino Community College in Flagstaff, Arizona, for early childhood development.

Pesodas and Blackhair had to prepare and present job applications, resumes, cover letters, present themselves in a mock interview and demonstrate job skills in front of a three-judge panel.

The ECE competition was based on promoting Native culture, Native language and diversity at the pre-school level.

Pesodas and Blackhair wrote, illustrated and presented pre-school story books in Hopi, Navajo and the Filipino languages. They also presented puppets and pre-school props that were handmade and designed to complement the Native based story lines for the pre-school age audience.

Tuba City High School brought home first place wins in the ECE area for five straight years and Pesodas and Blackhair did not disappoint with their recent first place sweep in Chinle.

Both Goatcher and Begay were extremely pleased with their school’s fifth consecutive win.

Goatcher also acknowledged the mentorship of Susie Robbins, Navajo language instructor at TCUSD, and Catrina Herbert, Pre-K program teacher at TCHS for motivating Pesodas and Blackhair to use their own Native languages in the pre-school educational materials and tools that helped them win this year.

Blackhair said the experience was helpful to her.

“This competition helped me better understand job interviews and encouraged me to demonstrate my ECE skills in front of others,” Blackhair said. “It also gave me an opportunity to meet new people and learn about other kinds of jobs.”

Pesodas said the competition gave him a sneak peak of what it is like to apply for a real job.

“It gave me the opportunity to demonstrate some of the skills I have learned at Tuba City High’s ECE program and to be able to share my own culture and language,” Pesodas said.

Begay said all the students did an awesome job representing Tuba City High School and the surrounding communities.

“These skills that they have learned will be used for a lifetime,” he said. “ It will take them places. I’m really just so proud of each and every single one of them.”

Tuba City High School is able to enroll students who qualify after testing in their sophomore year to be in an early childhood development program at CCC, which allows them to earn college level credits before graduating from high school.


The program around the state and on the Hopi and Navajo reservations as a successful program and has been the starting point for many young students at Tuba City High School who want to become early childhood development teachers or child care center directors.

In 1990, the Arizona State Legislature approved by statute that Arizona public schools could join together to combine efforts to offer CTE state approved programs in their high schools.

Tuba City High took the initiative along with six other reservation area high schools to form Native Joint Vocational District and those seven high schools together became satellite sites for Native to operate.

Currently, there are 14 Joint Technological Education districts in the Arizona public school network that assist with getting their high school students ready with career training before they graduate.

From culinary arts to welding, Native — CTE prepares students to enter a professional workforce immediately after high school or helps them transition to a community college or university should they so choose.

The vision for Native is that “while supporting cultural identity, Native will also provide high quality learning experiences to succeed in tomorrow’s workforce.”

Through specific chosen focused technical courses, Native helps give students a solid foundation they need to pursue the careers they would like to make their future living on. Partnerships with both universities and community colleges in Arizona and outside, allow students concurrent enrollment in dual credit classes during their high school career.