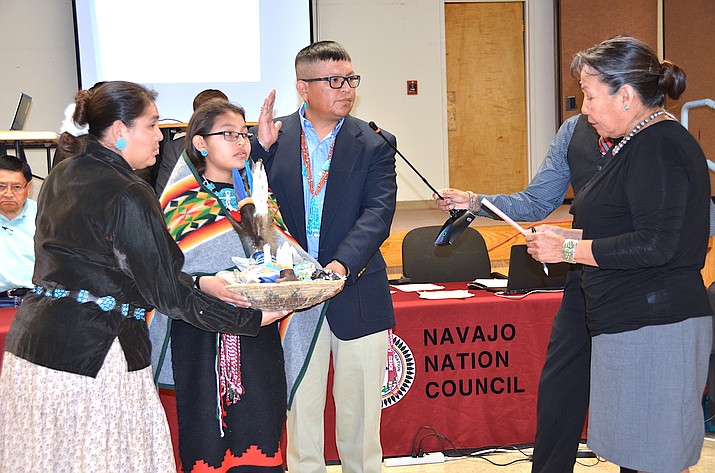 “My heart is full of pride, respect, and compassion as I humbly address you today my relatives, friends, neighbors, and constituents. I want to thank my communities because they believe I can stabilize our district and reaffirm their voice on the Navajo Nation Council,” Begay said.

He added that his communities urged him to fill the vacancy and expressed his gratitude for their support, and said he would do his best to represent his constituents because his communities now look to him for guidance on critical issues affecting their areas, as well as Navajo Nation issues as a whole.

“My colleagues and I are eager to begin working with Delegate Begay, and we now have a permanent and consistent full membership of Council that can move issues forward. With a myriad of issues the Nation is facing, I have full confidence that Delegate Begay is up to the challenge,” Bates said.

Bates and the Council also expressed their appreciation to outgoing interim delegate Peterson Yazzie, who filled the vacancy for the last eight months. Yazzie is originally from Tohatchi, and served as a member of the Health, Education, and Human Services Committee during his time on Council.

“It has not only been a privilege and an experience, but also a personal honor to work with Delegate Yazzie. You encouraged me and the rest of my colleagues in New Mexico to save the capitol outlay funds. Thank you for sticking by my side, Delegate Yazzie,” Damon said. “The $800,000 that went to Johnson Road in Twin Lakes and Coyote Canyon area could have been lost if it wasn’t for honorable Peterson Yazzie and his due diligence.”

Begay also thanked Yazzie for serving their communities, and presented a blanket on behalf of himself and his family for representing their chapters on the 23rd Navajo Nation Council.

“I want to thank you for the significant amount of work you did for our communities. I look forward to picking up where you left off,” Begay said. “As our five communities move forward, we must cooperate and help each other succeed through the promotion of local governance to help our chapters thrive and become successful.”