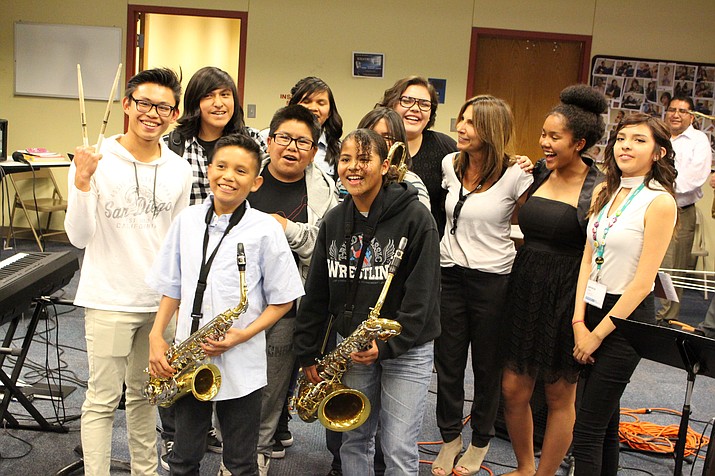 Hopi High music students pose with internationally acclaimed blues musician Deanna Bogart, who spent a week working with students before wrapping up with a concert at the school. Photo/Stan Bindell

The work paid off with an impressive, emotional performance by the Hopi High music students and Bogart in the band room as about 65 spectators gave thunderous applause at the concert’s end.

The magnitude of the event and the week was not lost on Hopi High music teacher Thomas Irwin as he called Bogart the ultimate professional. Bogart said her week at Hopi High was amazing. Bogart plays saxophone, keyboards and sings.

Irwin said he was glad they were playing blues because of its longstanding tradition in American music.

The Hopi High music students and Bogart started the concert with “I Just Want to Be With You,” “Do It Now,” “Peter Gunn” and “James Bond.”

Irwin praised Hopi High drummer Nicholai Bolus, a senior, who will be graduating this year.

“Nicholai is leaving us to take his phenomenal performances to NAU,” Irwin said. “But he will come back to do clinics. I want to recognize him and thank him.”

Hopi High student Stacy Charlie sang an emotionally charged solo of “Georgia” before Bogart performed a song she hadn’t played before: “I Can’t Help Falling in Love with You.”

The Hopi High music students then rocked the house with “Johnny B. Goode” before Hopi High student Greta Quotskuyva performed “Everywhere We Go,” a tune written by the Hopi High video class, now known as the Video Dawgz.

Bogart said working with the Hopi High music students was herhonor and privilege.

“The kids here are awesome,” she said.

Bogart, who performs in Europe and runs a jazz festival in Panama, performed on Nevis Island the week before coming to Hopi. She also performs throughout the states.

“Working with the Hopi High music students was unforgettable. This was life changing. I think I got more from this experience than they got from me. I’ll take a little bit of them with me wherever I go, and I’m leaving a part of me here,” she said.

“We came together and let the good seeds grow,” she said. “It doesn’t get any better than that. We were all able to just be ourselves.”

Bogart said the Hopi High music students’ performance was impressive despite their lack of experience.

“This was the first gig for some of them. It was safe and scary at the same time, but we trusted each other so there were no negatives. If we made mistakes it was a chance to learn. It was a shared experience,” she said.

Bogart said the music students were more excited than nervous before the concert.

“I shared the nervousness because I still get stage fright,” she said. “We did the best we could and many groups of kids would not have had that grit. The students strived to get better on the instruments and they reached that goal. The students were beyond great because they were honest and showed passion.”

Bogart said the audience seemed to be impressed with the music as they hooted and hollered in response to the tunes.

“We respected the strengths of each other. It was a balance of two dialects of music. We were equally inspired by each other. Our intentions were in tandem. The students learned that they can do a lot of things they didn’t know they could do, and now they know they are capable,” she said.

Bogart said the can-do spirit that the students learned should transfer to all areas of their lives. She said as a kid, she remembers people telling her what she couldn’t do and she always worked hard to prove them wrong.

“I want to wipe that out wherever I go, whether I’m talking to somebody nine or 90,” she said. “I want to erase that from as many souls as possible.”

Bogart hopes to return for classes on piano or songwriting.

Bogart said her week on the Hopi Reservation was beautiful and amazing because she was trying to navigate and understand it each day.

“It was great because people welcomed me into their homes,” she said. “Everywhere I go feels like home. Home is where I am. I became part of the tapestry here. Seeing the villages and being with the people in the villages made it special.”

Bogart said she would come back with a smile, but while she’s gone she will miss the people and wonder how they are doing.