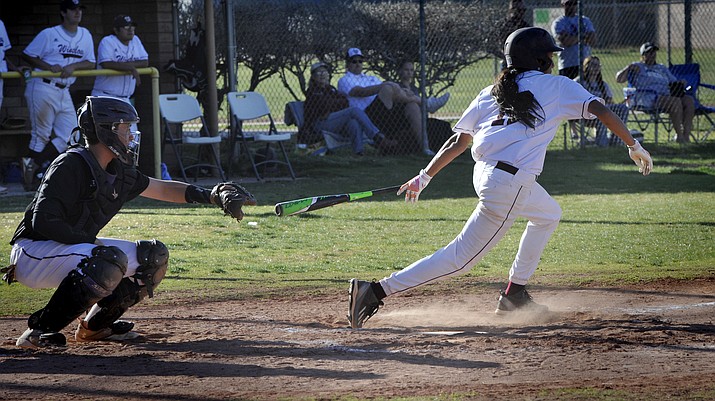 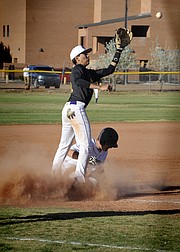 A Bulldog is safe at second base. Todd Roth/NHO 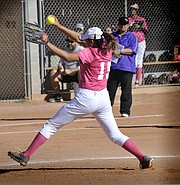 WINSLOW, Ariz. — The Winslow Bulldogs got revenge on Snowflake with a 12-8 victory over the Lobos April 11, after a 9-11 loss to them in the last game of the Wolves Classic Tournament.

In the 12-8 win over Snowflake K. C. Clay and Daniel Vizcaya were hitting stars, each driving in four runs. Clay was three for three with a double and Vizcaya was three for four with a home run. Nolan Robertson and Alec Williams were two for four. Jalen Lyons and A. J. Huerta were two for five. Brennan Sawyer was one for four. Junior Villanueva was one for five. Villanueva was the winning pitcher with Jacob Guerrero getting the save.

In the 9-6 win over Page, Vizcaya was again the batting star with 6 RBIs to his credit He was three for four with a triple and a home run. Robertson was the winning pitcher with Alec Williams getting the save.

The Bulldogs had nine hits. Guerrero was two for three. Huerta was two for four. Sawyer was tow for five. Lyons was one for three. Vizcaya and Villanueva were one for four.

The Winslow Lady Bulldogs continued their march toward the state playoffs in recent games despite a loss to a no-hit pitcher early in the week.

The Lady Bulldogs lost to the Snowflake Lady Lobos 5-0 April 11 in Snowflake and beat the Page Lady Sand Devils 9-8 in Page April 13. They completed the busy week by defeating the Blue Ridge lady Yellowjackets 16-0 at Winslow April 14. The results left the Lady Bulldogs with an 18-7 record for the season.

In the 5-0 loss to the Snowflake Lady Lobos, the Lady Bulldogs did not get a hit off Snowflake pitcher Breklee Tanner. Snowflake was led by Hailee McCray who was three for three with a home run, a double and four RBIs. Justine Butterfield took the loss giving up five runs, four of which were earned, on six hits and a walk.

In the 9-8 win over the Page Lady Sand Devils, the Lady Bulldogs had to come from well behind and win the game on a four run seventh inning rally. Page scored three runs in each of the first two innings and one in the top of the third for a 7-1 lead. Winslow cut the margin to 7-5 with a four run fifth inning and after the Lady Sand Devils had scored their last run in the top of the sixth put together their game winning rally to claim the victory.

Both Bulldog teams will play Payson at Payson April 18 and host Holbrook April 21. Show Low will come to April 24 and the Flagstaff Eagles will be at Winslow for the last game of the regular season April 26.