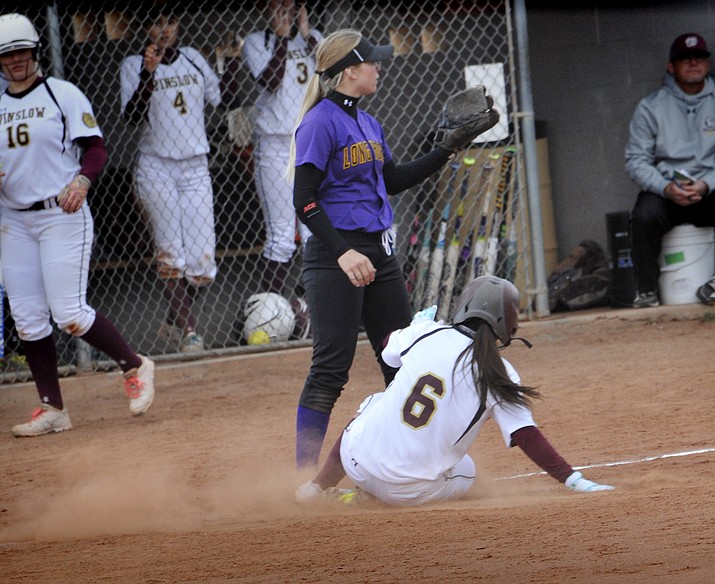 Sierra Wilcox slides into third base ahead of the ball in a previous game played against Payson March 31. The Lady Bulldogs racked up wins against Holbrook and Showlow last week. Photo/Todd Roth

WINSLOW, Ariz. — The Winslow Lady Bulldogs got a couple of important wins last week and improved their chances of favorable seeding in the state tournament that will follow regular season play.

The Lady Bulldogs defeated the Holbrook Lady Roadrunners 12-0 in Holbrook April 4, then topped the Show Low Lady Cougars 5-2 in Winslow April 7. The wins improved Winslow’s record to 16-6 for the season.

In the game at Holbrook, the Lady Bulldogs scored three runs in the second, third, fourth and fifth innings while holding Holbrook scoreless and allowing the game to end because of the 10-run lead rule. Sherreise Beaty worked all five innings for the shutout victory allowing just two hits and two walks while fanning seven.

The Lady Bulldogs had eight hits. Alyssa Barton and Ariana Quinonez were one for one. Gabrielle Gonzalez, Brooke Williams, Harleigh Scott, Alicia O’Haco and Jordan Johnson were one for three. Morgan Thomas was one for four. Williams and Quinonez had doubles.

Justine Butterfield went the distance for the win, allowing two runs, only one of which was earned, on five hits and no walks while fanning seven. Thomas was two for two at the plate. Johnson was two for three. Sierra Wilcox was one for two. Gonzalez, Scott and O’Haco were one for three. Thomas had a triple and Johnson had a double.