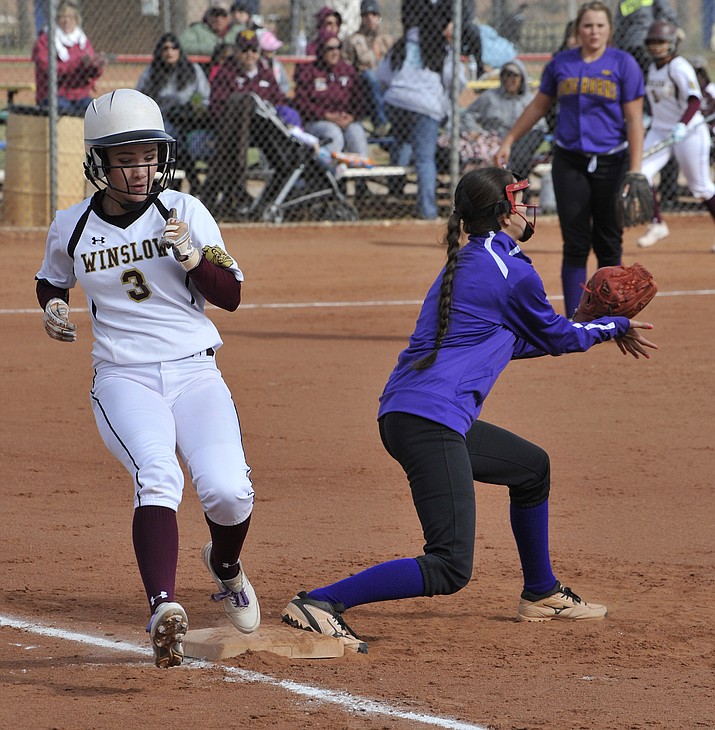 A Lady Bulldog beats the throw to first base. Todd Roth/NHO

WINSLOW, Ariz. — The Winslow Bulldogs baseball team lost a pair of games last week to Blue Ridge 9-5 in Pinetop March 27 and to Payson 6-4 in Winslow March 31. The result left the Bulldogs with a 6-6-1 record for the season.

Ricardo Villanueva and Ale Williams worked on the mound for the Bulldogs. Winslow only had six hits with Jason Lyons leading the way with two for four. Brennan Sawyer and Villanueva were one for three. Russell Foy and Daniel Vizcaya were one for four. Lyons had Winslow’s only extra base hit, a triple.

The Bulldogs were to meet the Holbrook Roadrunners at Holbrook April 4 and host the Estrella Foothills Wolves April 6 and the Maryvale Panthers April 7.

In softball, the Lady Bulldogs defeated the Blue Ridge Lady Yellowjackets 8-4 in Pinetop March 27. The win left the Lady Bulldogs with a 13-5 record for the season. The Lady Bulldogs had a game with the Payson Lady Longhorns at Winslow April 1, but no score sheet or results were available at press time.

Justine Butterfield worked the full seven innings and gave up four runs, all of which were unearned, on seven hits. She struck out seven and did not allow a walk. Winslow had 11 hits led by Butterfield and Tera Wilson who were two for three. Morgan Thomas and Alyssa Barton were two for four. Sierra Wilcox was one for two. Alicia O’Haco was one for three. Gabrielle Gonzalez was one for four. Butterfield had two doubles. Thomas, Barton, O’Haco and Wilson each had a double.

The lady Bulldogs were slated to meet the Holbrook lady Roadrunners April 4 in Holbrook and host the Show Low Lady Cougars April 7. They will meet the Snowflake Lady Lobos in Snowflake April 11 and host the Page Lady Sand Devils April 13 and the Blue Ridge Lady Yellowjackets April 14.