Tradition with a twist: after following in his father's footsteps, Navajo artist Bahe Whitethorne Jr. forges his own path forward 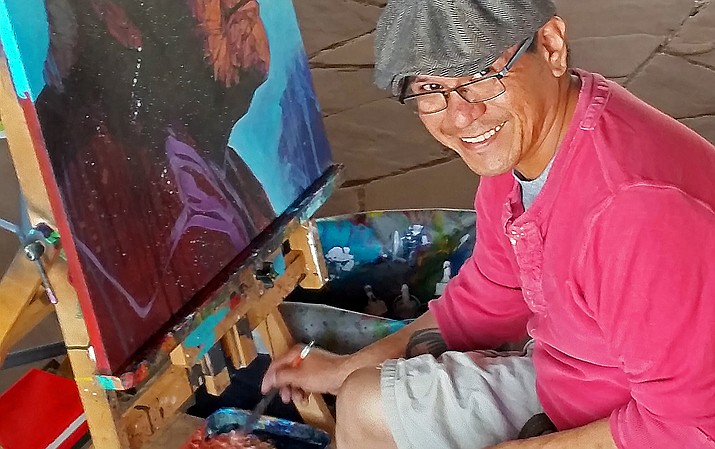 Whitethorne integrates Navajo mythology into his work and uses a variety of color techniques.

GRAND CANYON, Ariz. — Growing up in a family of artists — painters, jewelers, weavers and potters — Bahe Whitethorne Jr. grew up with an appreciation and a talent for painting. After spending a decade in the world of computer graphics and the publishing industry, Whitethorne made his way back to the art he grew up with, embracing new mediums and a new way of looking at traditional Navajo painting.

Whitethorne, a native of Flagstaff, grew up on the Navajo Nation watching his father, Bahe Whitethorne Sr., paint and draw. He worked with watercolors and pencils throughout his childhood, and didn’t realize until later on that he had a knack for one of the most difficult mediums to work with.

“I didn’t realize that I was learning the hardest medium out there … people were always telling me that watercolor was hard,” he said. “And I just thought ‘No, it’s not’ because that was all I knew.”

Whitethorne said it was his foray into the world of computers and technology that eventually brought him back to art, something he said he didn’t realize was a viable career.

“I told my dad, you know, you’re the painter, I’m going to go do computers,” he said.

But then he found out about computer graphics and design — programs like Adobe Photoshop and InDesign became widely available and Whitethorne began experimenting with vector art. After working as an art director for a publishing company for nine years, Whitethorne made his way back to painting.

Once Whitethorne settled back into his artistic roots, he began to explore with new mediums, including a new-found love of acrylic paints, which he now works with for the majority of his projects. But like all of his work, Whitethorne adds a twist — he uses techniques designed for oil, airbrush and watercolor paints to give his acrylic works depth and movement.

Whitethorne isn’t only a painter, though. He handles all of the major aspects of his career, thanks to his experience in the publishing and computer industries.

“I’m a painter, but I can also program my own website,” he explained. “I can print my own brochures, and I don’t need a gallery, because I have my own website.”

Art is more than a commercial venture for Whitethorne, who takes advantage of opportunities to give presentations and talks at schools on the Navajo Nation about the importance of the arts and how to turn artistic talent into a career. He also contributes art to the communities he grew up in, including an 8x18 foot mural at the Tuba City Boarding School, which he completed in about three days.

He also joined a Grand Canyon Youth river trip, where he taught students to work with watercolors along the side of the river.

“That experience, sitting on a rock, painting the cliffs — I’d never done that before,” he said. “So while I was down there, I got all these sketches of the river and the whole thing, and I gave them to the kids at the end of the trip.”

Working fast is one of the things that Whitethorne has embraced during his career.

“I work outside a lot, and acrylics dry so fast that I’ve kind of conditioned myself to work fast,” he said. “And the more quickly I work, the more I find the major characteristics and work from there.”

As he carries on the family tradition — his father has been an artist for more than 40 years and his brother and sister are also artists — Whitethorne has strived to add his own influences and experiences to his work.

“My father is really well-known, those are some pretty big shoes to fill,” he said. “But one thing I am so glad he told me is ‘Look, I took the art here. You don’t have to do what I do.’”

Because of his father’s advice, Whitethorne has been able to take his art in a unique direction.

While working as art director for the publishing company, Whitethorne said he didn’t know much about picture books, so he began exploring the drawings and depictions in mythology books. That, he said, led him to Jung’s work on personality archetypes. He also began to delve into color theory.

“I took this marketing class, and I learned all of the ways that marketers use images, symbology and colors to create a brand for themselves,” he said. “So I’ve taken all of those tools and applied them to my paintings, but in a way that’s positive.”

Whitethorne said he wants people who look at his paintings to remember a part of themselves — that’s why he uses archetypes and symbolic colors that everyone can connect to.

“I use my Navajo mythology, but I also tie in Greek mythology, because many of the archetypes are the same,” he said. “For example, the Greek Hermes and Roman Mercury are the same character, and in Navajo, that character is the coyote, because the coyote can go up to the heavens and also stay down here with us. They’re all messengers.”

Whitethorne’s style has changed and evolved, even from a year ago until now, he said. He was inspired to learn how to better paint people after seeing a woman’s face in a street art mural.

“I painted the woman’s profile, and it didn’t look much like a person,” he said. “So I needed to learn how to get better at painting people.”

After sitting down in his studio, Whitethorne said he put himself through ‘art school,’ teaching himself about symmetry, balance and composition — all present in his current works.

As for his style, Whitethorne describes it as having a ‘Renaissance type of quality’ blended with a ‘kind of street art, comic-y style.’ All are portraits, mostly from old photographs.

He has great respect and appreciation for traditional Navajo painting, he said, but he feels like it’s been done enough in the past.

“There’s a lot of people painting traditional stuff, and you know, I just want to paint the kind of stuff that I would like to see,” he said. “It’s cool, but I want to twist it up a little. I want to go back, learn old techniques, but then use them in a way that is me.”

For more examples of Whitethorne's work, visit his Facebook page.