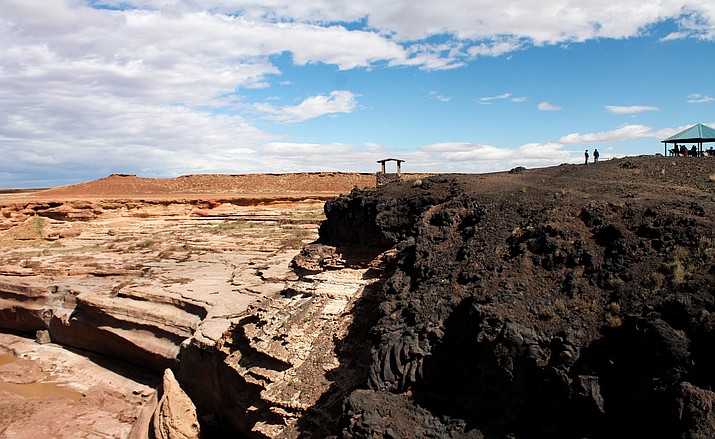 VIsitors to Grand Falls can enjoy a new interpretive site featuring a covered ramada with picnic tables and a restroom facility. The site features panels sharing the history of the falls and the legacy of Navajo Code Talkers. The site was dedicated in a ceremony Sept. 22.

GRAND FALLS, Ariz. — The name does it no justice. On days when the classic red rocks, cliffs and earth of the Navajo Nation stand out against the clear blue western sky and puffy white clouds create shadows and images on the landscape, Grand Falls is breathtaking.

Which is one reason Coconino County Parks and Recreation and the Leupp Chapter of the Navajo Nation decided to construct a new interpretive site at the increasingly popular site.

On Sept. 22, a dedication ceremony was held at the dry falls with members of the Navajo Nation, Coconino County Parks and Rec., local ranchers and the public in attendance.

“We worked with the chapter and the stakeholders to come up with a theme,” said Jeff Stein, construction manager for Coconino County Parks and Recreation.

Stein said preserving Navajo culture was an important factor in designing the interpretive site. Parks and Recreation worked with members of the Leupp Chapter House to incorporate Native features and architectural designs. The ramada is shaped like a hogan (oriented to the east) and the floor features a concrete stamp that includes the four sacred Navajo plants of maize, beans, tobacco and squash. The construction was also preceded by a traditional Navajo blessing ceremony.

According to Luke Ray, a local cattle rancher, whose ranch borders Grand Falls, the area has had a noticeable increase in tourism over the last several years.

“Tourism is getting big out here,” he said. “Since the weather got nice, people have been out here – camping too.”

Ray and his family have a legacy with the land surrounding the falls. Ray’s family has ranched the area since before Ray was born. His grandfather’s name is Grand Falls, after the waterfall. Ray and other local ranchers run approximately 300 head of cattle on the surrounding land. The cattle are then sold to Twin Arrows Casino.

With the new interpretive site Ray is concerned there will be more tourists. Ray said in the past visitors have crossed onto the grasslands where his cattle graze and have driven on unmarked roads or created new roads. During the dedication, Ray brought up the issue, asking whether or not signs could be posted to clearly mark where the grazing land begins.

“I asked if we could get a boundary so we know where the park is and where it’s not. Because this is where we live and where we ranch,” he said. “We don’t want people driving everywhere. We don’t appreciate that at all. There are so many people now and there are going to be more people.”

District Four’s Coconino County Board of Supervisor, Mandy Metzger said as a rancher herself, she understood the concern that disturbing of grazing lands could have for ranchers.

“We’ve been able to do a lot with signage and explaining exactly what you are saying,” she said. “It is a community issue but we have been successful with signage.”

Ray said he thought a distinct boundary line or a public announcement would help clarify for visitors and ranchers what areas are considered part of Grand Falls. Ray was referred to a local land use planning committee and Navajo Council Delegate Walter Phelps, who was in attendance.

“The thing is, if you invite more tourists, you have to take responsibility for it,” Ray said.

The project is now complete and the county has turned the site over to the Navajo Nation. The Nation is responsible for the maintenance and care of the facility.

Grand Falls was formed by the eruption of Merriam Crater. When it erupted, the small cinder cone volcano created a lava flow that traveled seven miles to Grand Falls where it flowed 200 feet down into the Little Colorado River. The lava flow then diverted the river to the northeast. Today, the river continues in it channel before connecting with the Colorado River in the Grand Canyon. The area where the two rivers meet is called the confluence. Grand Falls typically flows only during snow melt, in the spring, or during monsoon season.

In addition to Grand Falls, two other Navajo Nation sites, Antelope Canyon near Page and the Little Colorado Overlook near Cameron, have also been upgraded with new interpretive panels and ramadas. The three sites are part of the 2002 Coconino Parks and Open Space initiative. Through the initiative, voters approved a 1/8 cent sales tax for open space acquisition and park development. The tax expired in Sept. 2014. The total budget for the Navajo Nation interpretive sites is $325,000.

More information about Grand Falls and directions to the site are available at http://navajonationparks.org/htm/grandfalls.htm