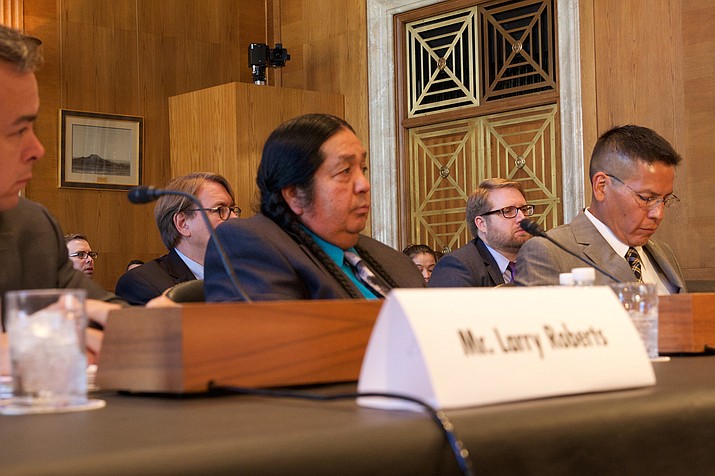 Hualapai Tribe Chairman Damon Clarke said a bill allocating water is necessary for his tribe’s welfare – but it will also benefit the state through greater tourism. Photo/Jessica Suerth/Cronkite News

WASHINGTON — The chairman of the Hualapai Tribe told a Senate committee Wednesday that a proposed 70-mile, $173 million water project would lay the groundwork for expansion of Grand Canyon West and increased tourism in the state.

Damon Clarke told the Senate Indian Affairs Committee that the Hualapai Tribe Water Rights Settlement Act of 2016 will also preserve the tribe’s dwindling source of groundwater by allocating 4,000 acre-feet of Colorado River water per year to the tribe.

“The nearest groundwater to Grand Canyon West is 35 miles away, and that supply is barely adequate for current operations, and completely inadequate for growth,” Clarke said. “With additional water, the tribe could take advantage of the potential for further development that would provide additional jobs for tribal members and non-Indians, as well as revenues for our tribal government.”

But the Interior Department expressed “significant concerns” at Wednesday’s hearing about the cost of the project and the “relatively small amount of water to be delivered” under the project. In prepared testimony for the hearing, acting Assistant Secretary Larry Roberts said the true cost of the project could be even higher than anticipated.

“We believe the cost to construct a 70-mile pipeline from the Colorado River … will be significantly higher than the amount authorized,” Roberts’ statement said.

The department also raised concerns that language in the bill could generate “substantial litigation.”

Roberts’ statement said the department supports efforts to settle water-rights claims and looks to “reach a fair and final settlement … that we can fully support.”

But Sen. Jeff Flake, R-Arizona, said the legislation provides “significant but fair” benefits to the tribe, while ensuring that communities outside the region are not shortchanged on their water needs.

“It (the Colorado River) provides roughly 40 percent of our water supply,” Flake said. “And because of the priority the tribes claim, there’s a possibility that future development and other water rights could displace current water users in Arizona.”

Flake, who introduced the bill last week with fellow Arizona Republican Sen. John McCain, said the agreement would also bring essential tourism revenue to the state by boosting business at the tribe-owned Grand Canyon West, which he said currently has about 1 million visitors a year.

“Without access to additional, reliable water supplies, we are unable to realize its full potential, which includes a residential community of Grand Canyon West for the tribal members who work there,” Flake said.

Under the 92-page bill, the Hualapai would get 4,000 acre-feet of water per year for use at Grand Canyon West and the tribe’s main residential community in Peach Springs. It would allocate $134.5 million in federal funds to build the project and put $39 million in trust – $32 million in a tribal trust and $7 million to Interior – for maintenance and “technical assistance” from the department.

Peach Springs, home to most of the tribe’s members, is a two-hour, dirt-road drive from the Grand Canyon West, a tribally maintained section of the canyon that is best known for the Grand Canyon Skywalk, a glass-bottomed walkway extending from the canyon rim to a point 4,000 feet above the river below.

There was no committee vote on the bill Wednesday and there are only a few workweeks left in this Congress to approve the measure. The House and Senate are scheduled to go on recess at the end of this month, if not sooner, and not return until after the Nov. 8 election.

Clarke said that it the act does not pass, the tribe could soon face dangerously low levels of groundwater, its current main source for water.

“Our tribe needs delivery of Colorado River water, both to provide a permanent and secure water supply to our future population in Peach Springs and elsewhere on our reservation,” he testified.

Flake said Arizona needs to approve the act to support the Hualapai and others who rely on Colorado River water.

“Arizona has a history of forward-looking water planning,” he said. “We need to continue this kind of planning and do more.”