Bulldogs continue pounding competition with a win over Tuba City 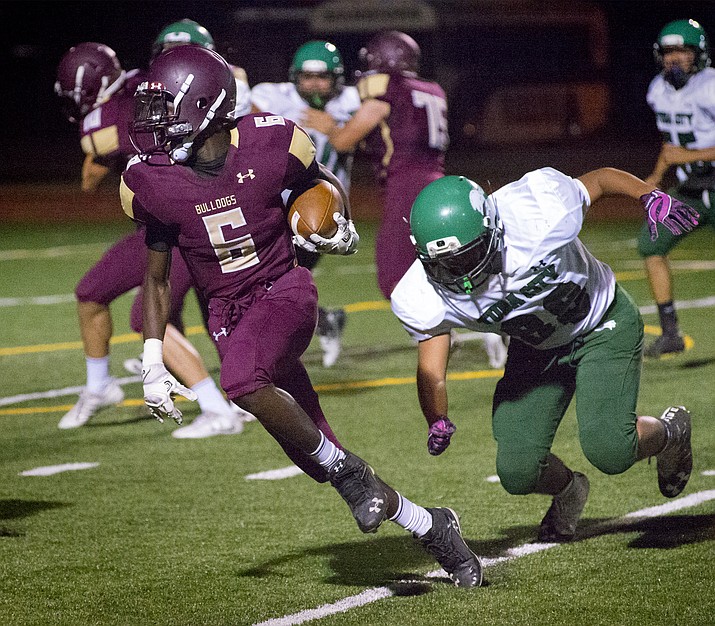 WINSLOW, Ariz. — The Winslow Bulldogs defeated the Tuba City Warriors 46-0 in Winslow Sept. 16. The win improved Winslow’s record to 3-1 for the season and dropped Tuba City’s to 3-2. The win was Winslow’s third consecutive after an opening season loss to Monument Valley at Kayenta.

Winslow scored on its first possession on a seven yard run by Nick Reyes. Damon Avelar booted the conversion for a 7-0 lead with 8:51left in the first quarter.

The Bulldogs increased their lead on a 54-yard pass from Junior Villanueva to Mikel Bonner. The conversion failed and Winslow led 13-0 with 3:35 left in the quarter.

Villanueva intercepted a Tuba City pass to set up Winslow’s next score. Nick Reyes ran 34 yards to score with just 29 second left in the quarter. The conversion run failed and Winslow led 19-0 going into the second quarter.

Tuba City threatened but Villanueva intercepted a pass in the end zone to end that drive.

Winslow blocked a Tuba City punt that set up the nest score on a 14 yard run by freshman Yoann Diassa. The two-point conversion run by Danny Bourque gave Winslow a 27-0 lead with 4:30 left in the half.

After a Tuba City fumble Bonner ran 26 yard for a touchdown. The conversion run failed and Winslow led 33-0.

The final score of the first half came with just seconds remaining when Preston Betoney picked up Tuba City fumble and ran 25 yards for the touchdown. Avelar converted to give the Bulldogs a 40-0 halftime lead.

The Bulldogs host the Coconino Panthers in their Homecoming game Sept. 23 with a 6 p.m. kickoff. The Panthers won a high scoring 54-48 game over Mohave at Flagstaff Sept. 16. Winslow and Coconino were fierce rivals many years ago and this could be an important renewal of that rivalry.