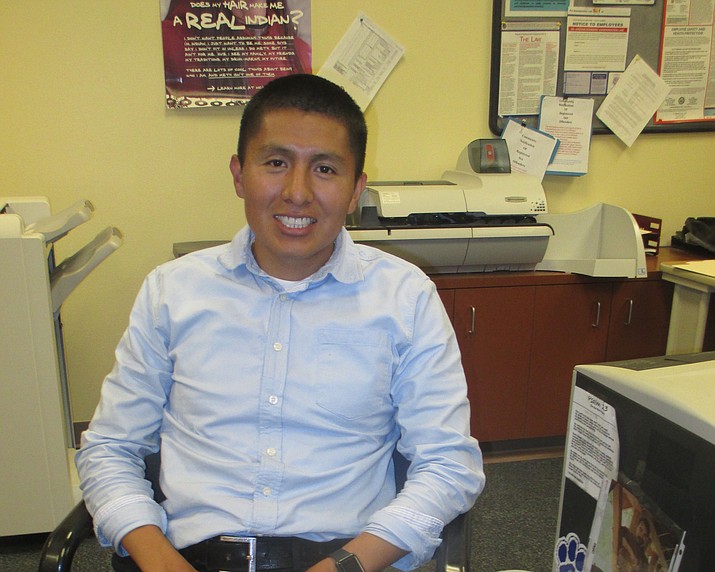 Adams said the Bruin Manifesto is a product that gives the students and staff a clear vision.

“It’s taken from the community and it’s a vision of the tradition of Hopi. The goal is to adopt the community into our school,” he said.

Adams said the Bruin Manifesto is not only about academics and career skills, but about building character. He said it’s also about building a common language for positive languages for every student every day in every classroom.

Adams said he has studied successful people and one of the keys to their success is their positive habits, including daily affirmations.

“This can systematically serve every student in one minute,” he said. “They can think about a positive message within themselves. The opposite of anger and sadness is thankfulness and gratitude. You can’t have both at the same time. This will combat anger and sadness.”

Adams is in the process of putting together a new discipline policy at the school with the emphasis on self-reflection by the students who commit the infractions. He said that drug and alcohol cases are immediately turned over to the police.

“Discipline is more effective when kids take responsibility,” he said.

Adams said the logistics for this plan have not yet been completed.

“We’re more in a year of the planning process now so there are very little changes for this year,” he said. “This will be about strengthening our prevention efforts.”

Adams said the staff needs to be more involved in the hallways reinforcing what they want to see in terms of student behavior.

“I would love to see every teacher outside their door where students hang out,” he said.

Adams said every teacher should be mentoring five to six students on a regular basis.

Adams said many of the students deal with problems at home.

“We want the students to take responsibility for their actions,” he said. “We want action oriented solutions.”

For example, Adams said, repeat offenders would have to give a presentation to a class about what they did, why and how they felt about it.

“We want to modify student behaviors,” he said.

Adams wants to train students to serve as a team to handle student problems. He said this would be a student support team that would create peer to peer solutions.

“We have a lot of talented students. We can take the burden off ourselves while instilling some good behaviors,” he said.

Adams said Hopi Jr./Sr. High School had to take corrective action because the school is listed as Corrective Action 2 with the Bureau of Indian Education because of its low test scores for several years.

“We have to demonstrate that we’re taking action to improve the school,” he said.

Hopi Jr/Sr High School increased learning time by starting the school day earlier and finishing it later. Class periods were extended from 47 to 70 minutes. The emphasis is on working hard Mondays through Thursdays and then offering enrichment days and shorter classes on Fridays.

Adams said the school can improve test scores by controlling the environment to make students feel safe, supported and encouraged.

“Then we can start to see increased test scores,” he said.

Adams said teachers can find out about the test data and prepare students for the test.

“Test scores can increase this year but we’re focusing on improving habits. It will take a couple years to get everything squared away,” he said.

Adams said high test scores generally show that there is a mastery or competency in a particular subject.

“I have no doubt our school and students are strongly capable of achieving this mastery level,” he said.

Adams added that the school can do a better job at linking the purpose of test scores to their in-classroom learning. One idea is classes or grades can challenge each other to score higher. Another idea is to create growth charts that students monitor in their own learning.

“As a school, we are trying our best to create optimal conditions so that learning becomes a priority,” he said.

Adams said students should expect more of themselves and have pride in themselves as well as who they represent.

“Once students have a clearer idea of who they are and where they are going, I believe the quality of classroom work will improve,” he said.

Adams believes that students adapt to the environment where they learn.

“So, as a staff we are working to create improved conditions for our students to succeed in. Students are the seeds; the school is the soil/field. Therefore, our responsibility is to provide the best growing conditions,” he said.

Adams said the students have had to go through a lot of changes in the past year, but they should understand that everything is done in the best interest of the students.

Adams said some students bring problems from home and if they are bringing routines or habits that don’t fit in with the school that the administration will call them out on it.

“They know that we are watching and that we care,” he said. “It’s about building relationships with the students. The buy-in from the students will come from our modeling proper behavior.”

Adams said he hasn’t received much feedback from parents, but during an open house about 20 parents who attended liked the changes.

“The parents read the Bruin Manifesto aloud after one requested it. It was powerful,” he said.

Adams said the administration can use some out of the box strategies to engage parents with material and how to be involved during sporting events.

“We have to define what parent involvement with the school looks like,” he said. “Parents most of the time want to contribute, however don’t know how to go about it. I would like to see minimum roles that are clearly drawn out of what the school identifies as an involved parent.”

Adams said this way parents can actively measure themselves as to whether they are active in their students’ education.

“The more informed our students become, the less students will use. Therefore, prevention efforts, such as classroom presentations, help decrease future use,” he said.