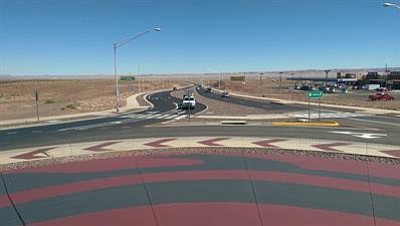 Improvements to U.S. 89 in Cameron include a new roundabout for the Highway 64 and U.S. 89 interchange. Photo/courtesy of Arizona Department of Transportation

Ongoing construction on U.S. 89 in Cameron finished in early September. Photo/courtesy of Arizona Department of Transportation

CAMERON, Ariz. — U.S. 89 through the Navajo Nation community of Cameron has a wider roadway, two new bridges over the Little Colorado River, a roundabout at the junction with State Rt. 64 and underpasses for people and livestock after a recently completed Arizona Department of Transportation (ADOT) project.

“Traffic safety and mobility are ADOT’s top priorities,” said Audra Merrick, district engineer for ADOT’s North Central District. “In addition to keeping motorists safer with a wider highway and new lighting, the people of Cameron have better mobility with new sidewalks and underpasses that provide connection on both sides of U.S. 89.”

The four-mile, four-lane stretch of U.S. 89 in Cameron, about 50 miles north of Flagstaff, features a raised median to enhance safety as well as four underpasses.

An older truss bridge at the Little Colorado River has also been replaced by separate bridges for northbound and southbound traffic. The new bridges meet all current state and federal standards, and can carry more traffic.

A modern roundabout built to accommodate large vehicles provides an interchange for those using SR 64 to or from the eastern entrance to Grand Canyon National Park or taking U.S. 89 as the gateway to or from the Page/Lake Powell region, Arizona Strip, southern Utah, Four Corners area and other points of interest.

ADOT begins work to widen U.S. 89 through Cameron
ADOT looks to work with Navajo Nation on $35 million road project in Cameron
ADOT begins work on 89A north of Cameron
TRAVELER ALERT: I-17 closed at Carefree Highway this weekend for bridge demolition
U.S. 89 reopens after wash out
Event Calendar