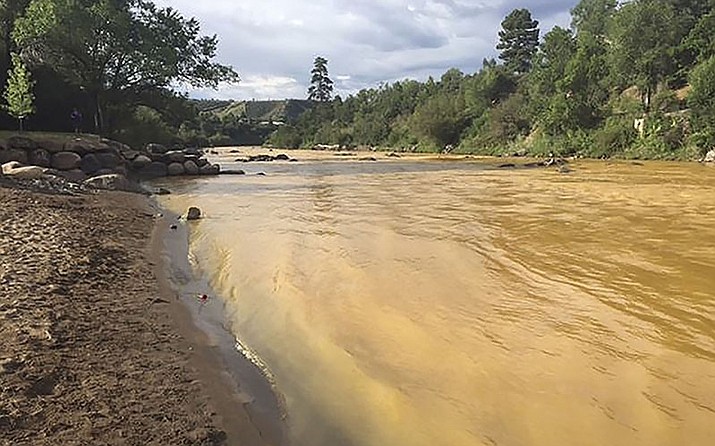 The Animas River ran yellow with toxin-tainted wastewater that was accidentally released from the abandoned Gold King Mine near Silverton, Colorado, in August 2015. The EPA has declared the area a Superfund site. Photo/Colorado Parks and Wildlife Department via Reuters

WASHINGTON — Environmental and tribal activists welcomed the government’s announcement Sept. 7 that it had designated the Gold King Mine a Superfund site, advancing the cleanup of an area contaminated by a multimillion-gallon toxic spill last year.

The Colorado mine was one of dozens of sites designated by the Environmental Protection Agency as the nation’s most polluted – even though an agency official said the final cleanup is still a decade or more away.

But the news was still welcomed by advocates.

Sandy Bahr, the director of the Grand Canyon chapter of the Sierra Club, said the EPA’s recent classification of Gold King as a Superfund site was something that a lot of people have been advocating for for some time.

Jackson Brossy, executive director of the Navajo Nation Washington Office, called the move promising, saying the designation has been a long time coming.

The announcement comes weeks after the Navajo Nation sued the EPA over the spill, claiming one of the tribe’s most important resources – the water it draws from the San Juan River – was poisoned with some of the worst contaminants known to man.

The spill was triggered in August 2015 when crews that were supposed to be cleaning up the abandoned mine in Silverton, Colorado, accidentally breached a mine tunnel instead. The breach sent millions of gallons of mine wastewater streaming into the Animas River.

The spill contained zinc, lead, iron and arsenic and turned the river a ghastly orange-yellow for miles. The Animas feeds several other Southwestern rivers, including the San Juan and, ultimately, the Colorado.

While officials said the immediate threat from the spill quickly passed, nearby residents like the Navajo worried about lingering harm, while lawmakers like Sen. John McCain, R-Arizona, and Rep. Ann Kirkpatrick, D-Flagstaff, accused the EPA of neglect for its handling of the spill.

Emergency cleanup alone from last year’s spill was estimated to cost up to $20 million, according to an agency report in January.

The Superfund designation allows the agency to collect data on surface water, rocks and other environmental aspects in San Juan County’s Bonita Peak Mining District, which includes the Gold King Mine.

EPA Project Manager Rebecca Thomas said it could take up to 10 years to gain control of the contamination and completely clean the area. She said the agency will continue to collect data, identify alternatives to address the contamination, then will go into a construction phase.

Bahr said the Sierra Club hopes the agency can ensure protection of downstream waters in the future, to prevent another incident in the future.

“It’d be nice if we could make sure that sites all over the country and especially these toxic mining sites were more cleaned up,” Bahr said. “And it’d be even better if we could get the responsible parties to pay for it, because often the taxpayers ending up footing a big part of the bill.”