18th annual Standin’ on the Corner Fest Friday and Saturday 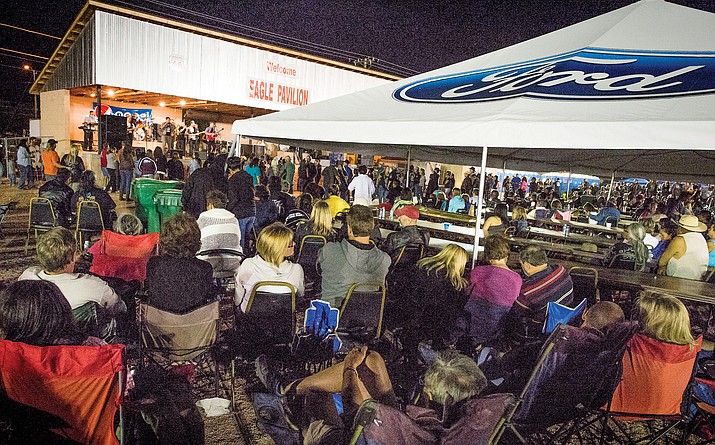 The 17th annual Standin’ on the Corner Festival drew out a big crowd to watch performances at the Eagles Pavilion in Winslow, Arizona. Music and entertainment, as well as local vendors, line the streets during the day selling arts, crafts and food. A special dedication to the late Glenn Frey will take place Sept. 23 at noon. Todd RothNHO

Festival goers enjoy the night life at Standin' on the Corner. Photo/Todd Roth

WINSLOW, Ariz. — Winslow’s 18th annual Standin’ on the Corner Festival takes place Sept. 23-24 in Winslow, an annual event that started in 1999, which coincided with the unveiling of a mural and statue in the park.

The festival will take place in downtown Winslow on Historic Route 66 (West Second Street) and North Campbell Avenue at the Eagle Pavilion located behind the Winslow Chamber of Commerce (Historic Hubbell Building) and Visitor’s Center. The Eagle Pavilion was built by the Standin’ on the Corner Foundation with donations from businesses, individuals, the city of Winslow and funds raised from the festival and volunteers. The foundation’s mission is the redevelopment of Winslow (the mission used to be the redevelopment of just the historic district but it has expanded that mission to include all of Winslow).

The first festival sixteen years ago was an impromptu celebration for the completion and opening of the park, which has now grown into a huge festival, which draws five to 10,000 people over the weekend.

The event celebrates the well-known single “Take it Easy,” written by the late Glenn Frey and Jackson Browne, which became a hit in the 1970s for the Eagles and put the community of Winslow on the map. The verse ‘standin’ on the corner in Winslow, Arizona’ draws visitors from far and wide to stand on that famous corner on historic Route 66.

This year, a Glenn Frey Memorial — a statue dedication — will take place Sept. 23 on the corner of Second Street and Kinsley Avenue from noon to 2:30 p.m. The rest of the entertainment begins at 3 p.m. on Friday and 9 a.m. on Saturday. Cost is $5 per person. A horseshoe tournament is $20 per person and takes place Saturday.

Throughout the festival, vendors will sell everything from crafts, food and clothing. The event has fun for the entire family. A beer garden will have a tasting tent.

The festival’s returning bands Tommy Dukes, Stephen Padilla and Take it to the Limit, an Eagles cover band, will perform. In addition to these familiar names some other bands including Rhythm Edition, Coyote Moon Band, Triple Play, The Miller Boys and Higeria, a local favorite alternative band, Ty One on, country rock, and One of These Nights, a tribute to the Eagles, will also take the stage. In addition to the bands, NPC Ballet Folklorico, a Mexican Dance Group and the High Country Dance Team will perform.

On Sept. 245 from 3 p.m. to 5 p.m., the annual Standin’ on the Corner Foundation Auction takes place, which is the big fundraiser for the foundation. Lots of items will be auctioned off, including some Eagles memorabilia.

She said the city of Winslow also benefits greatly from the festival, which is the foundation’s mission.

In addition, the festival is a chance for everyone to shop local, which is important for a small community. Butler said that local businesses are generous with donations to the event and to the live auction.

The money raised ensures the foundation will be able to continue with the annual festival, keeping the park and the pavilion in top form and continuing in the efforts to improve our community, a member of the foundation said last year.

The foundation said the history of the park is also important to remember and without the founding members’ hard work and determination, the vision of the historic downtown of Winslow would have been lost.

Seeing the success of their efforts to save La Posada, Marie Lamaar and Janice Griffith focused their attention on creating another attraction in Winslow that capitalized on the hit song, “Take it Easy.”

The Standing on the Corner Foundation was formed by these women and a group of private citizens, including Glenn and Yvonne Howeth, Larry Benham, Chris and Larry Payne, Bert Peterson, Greg and Connie Hacker.

The Standin’ on the Corner Park was built brick by brick with donations made by local businesses, individuals, many volunteer hours and investments by the city of Winslow. The Kaufman family donated the property where the park on the corner is located. John Pugh painted a two-story mural for the park and the iconic, bronze life-size 1970s Rock and Roll guitarist, made by Ron Adamson, was placed over personalized donor bricks.

The Standin’ on the Corner Park and La Posada were voted the number one and two icons on Route 66 in an online poll at http://www.route66news.com/2015/01/01/top-10-icons-route-66/ and a photograph of the park as a meme went viral on the Internet.