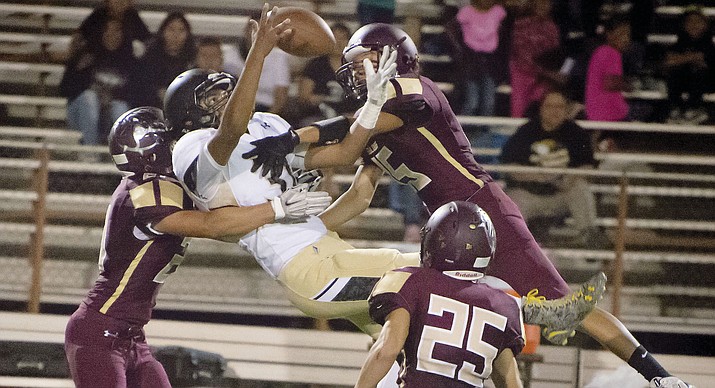 Chinle receiver surrounded by Bulldogs in the Bulldogs victory against the Wildcats Sept. 9 in Winlow. Photo/Todd Roth 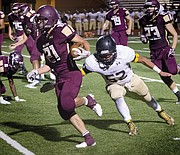 Nick Reyes on the move in the Bulldogs’ win 45-0 against the Chinle Wildcats Sept. 9 in Winslow. Photo/Todd Roth

The Winslow Bulldogs defeated the Chinle Wildcats 45-0 in Winslow on Friday. The win improved Winslow’s record to 5-1 for the season and dropped Chinle’s to 0-3.

The Bulldogs started strong and dominated the game from the opening kickoff. The defense kept Chinle off the board and for the most part out of their territory.

It was a good game for quarterback Junior Villanueva and receiver/running back Mikel Bonner. Freshman sensation Yoann Diassa also made a big contribution.

Winslow scored on its first possession on a 44-yard pass from Villanueva to Bonner. The conversion failed and Winslow led 6-0 with 9:36 left in the first quarter.

The Bulldogs scored on their second possession on a 29-yard pass from Villanueva to Bonner again. The conversion pass failed and Winslow led 12-0.

The Winslow defense scored the next touchdown when Yoann Diassa intercepted a Chinle pass and returned it 29 yards for the score. The conversion run failed and the Bulldogs led 18-0 with much of the first quarter left to be played. The touchdown was the fourth for the freshman Diassa in only his second varsity game.

Winslow blocked a Chinle punt and needed to complete a fourth down pass to keep the drive alive. Bonner ran three yards for the touchdown. The conversion failed and Winslow led 24-0 with just over three minutes left in the first quarter.

Chinle got into Winslow territory for the first time in the game when they recovered a Winslow fumble on a punt return attempt. The Wildcats got their first first-down of the game in that possession. The first quarter ended with Winslow leading 24-0 and having scored on all of their possession and once on defense.

Winslow took the ball on downs after Chinle’s only venture into their territory. Winslow failed to score on a possession for the first time in the game and a short punt gave Chinle possession near midfield.

The Bulldogs scored on their next possession but needed to complete fourth down pass to keep the drive alive and scored on a fourth and a fourth down four yard pass from Junior Villanueva to Nick Reyes with just two minutes left in the half. The half ended with Winslow leading 30-0.

Bonner scored on a 39-yard pass from Villanueva or the touchdown and Damon Avelar booted the conversion to give Winslow a 45-0 lead. The Bulldogs needed to pick up a fourth down and two to keep this drive alive. The third quarter ended with Winslow leading 45-0.

The running clock which should have started after Winslow went up by more than 42 points started late in the fourth quarter.

The Bulldogs will host the Tuba City Warriors on Friday. The Warriors were 2-1 going into their game at Chino Valley on Friday. The loss was to Snowflake 59-0 and the wins were against lesser opponents, Pinon and Hopi, but both were by impressive 58-0 scores.